For us to have any true hope about the world, we have to look suffering full in the face: cruelty and violence and injustice are real. 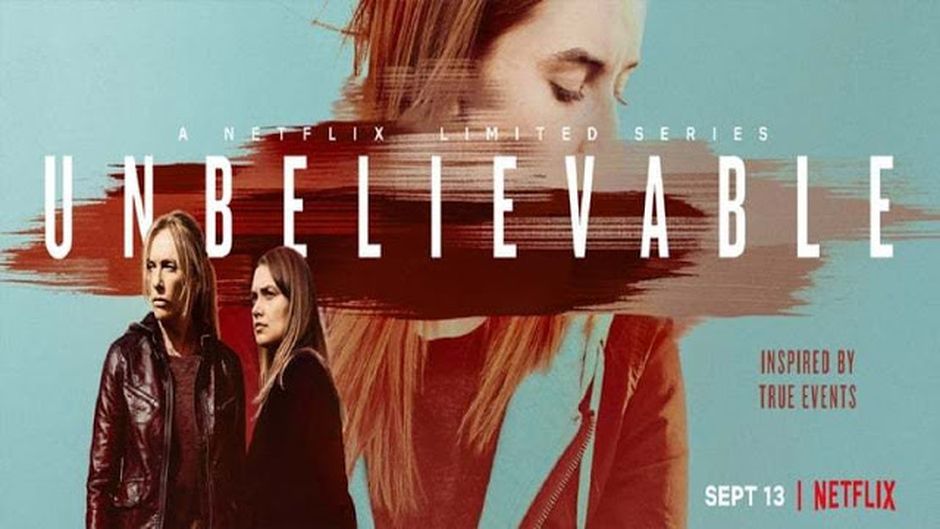 Poster of the series.

The last time I reviewed something on my blog was back in 2015; it's quite unusual for me! But having just finished watching Netflix's Unbelievable, I felt compelled to do it again.

Two warnings before I kick off. Firstly, Unbelievable is a story about sexual abuse. Secondly, there will be spoilers. This post will hopefully make sense even if you haven't watched it, but if you would like to  without any information in advance, feel free to head over to Netflix now. It is an excellent programme, so if you can, I strongly recommend it!

A few people I spoke to gave up after Episode 1, which tells the bleak story of Marie Adler (impressively performed by Kaitlyn Dever), a young woman who suffers terrible abuse at the hands of a rapist.

She reports the story to the police, but after doubt is expressed over her story, withdraws her statement and tells everyone she made it up. The episode is bleak. But of course, it had to be.

It is based on specific true events, and true events in a general sense. Rape is terrible. It was so important to have a first episode that did not hold back from portraying the horror of the violation, or the bitter isolation of its victim.

As the programme developed it became a remarkable story of resilience and hope, but it can only be this, because for us to have any true hope about the world, we have to look suffering full in the face: cruelty and violence and injustice are real.

If we want redemption, it needs to be real. Superficial redemption is no redemption at all. To know what kind of redeemer is required, we need to look right at the depths. And the depths are dark and repellent and ugly. (That said, the horror was not gratuitous in anyway.)

Unbelievable has a woman-led cast, and the performances were excellent. I particularly loved the portrayal of the partnership between the two detectives (played by Toni Collette and Merritt Weaver) who begin working together once they realise that they are dealing with a serial rapists operating across different districts.

I was fascinated by the portrayal of Karen Duval (Weaver). It is unusual to see a woman of faith presented as an intelligent, strong, In Christ Alone singing bad-ass, at work to do genuine good in the world. Of course she reminded me of an awful lot of the women of faith I know.

She considers her pursuit of justice to be a matter of faith; she has "Here I am, send me," stuck to her dashboard, she admits that the injustice she sees in the world is a source of pain and contention with God and she is honest with him about it. (Take note, all ye who doubt tbe idea that godly women cannot be police officers.)

But what was most powerful about the programme was how well it communicated the fact that goodness is only possible through the execution of justice. Marie Adler stops believing that good things can happen when those who should be pursuing justice fail her.

Detective Grace Rasmussen (Colette) tells her partner in no uncertain terms how far God is falling short because he lets awful crimes go unpunished, and at the end, when the rapist is sentenced, she recognises it as an answer to prayer.

It is more common to see God publicly criticised for his judgement: can't he just let everyone off? But this story powerfully communicates that evil left unpunished is far, far worse. An evil in itself, in fact.

When the rapist is sentenced for his multiple crimes, he receives more than 300 years in prison. His actual crimes took less than a day, but no one involved in the case considers his punishment disproportionate.

The impact of his crimes last far longer than that, of course, and the final episode was particularly moving in its presentation of the long-term impact of sexual abuse. But the story demonstrates that the pursuit of justice is about the worth of the women.

The sentence is a wonderful vindication of their humanity: it is not okay that you were treated like property, like animals, carelessly, selfishly, brutally... justice isn't so much about paying back the moments of abuse, horrific as they may be. It's about vindicating the worth of the one violated.

This show helped me better understand the judgement of God. The fact that he judges evil is good news, especially in a world where even those who are meant to pursue justice are flawed, or in some cases evil themselves.

Some terrible crimes are committed and in this life, there are those who get away with it. What hope is there for victims of such injustices, without the confidence that one day, a perfectly good judge will set things right?

The programme doesn't make this point, but it did strike me. What about the times when I've treated people as trash? "Putting it right" isn't so much a restoration of one moment, it's about the worth of the ones I've violated.

Their value can't be restored in a moment for moment exchange. And what about the times I've treated as trash One who has infinite value? What length of sentence would be fitting for that?

In the light of this, an eternal Redeemer, able to plumb the murkiest depths, seems like staggeringly good news.

So, there are my thoughts on Unbelievable. I thought it was sensitive, hopeful, realistic, beautifully acted, thoughtful, nuanced and the best thing I've seen on TV for a while. And definitely worth talking about!

I would love to hear your thoughts too.

Philippa Wilson is a teacher from the UK. She writes at her blog A Certain Brightness. This article was re-published with permission.