Spanish evangelical psychologists and teachers gathered to analyse the challenges of new technologies and the latest trends in sex education in schools. 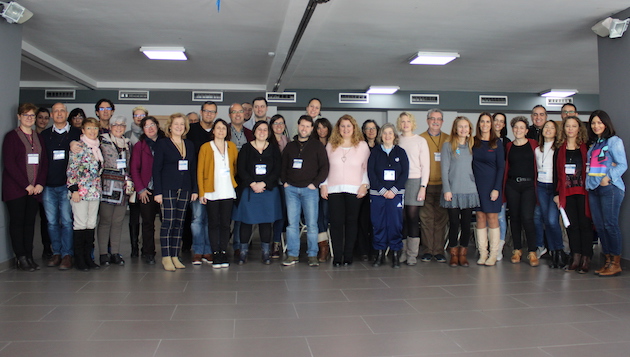 Evangelical psychologists and teachers at the 2019 annual gathering, in Comarruga. / GPE GDE

Around 40 professionals in the area of psychology and education gathered in Comarruga (Tarragona, Spain) from 8 to 10 February for the annual gathering of evangelical teachers and psychologists.

With the theme “Healthy roots, strong wings”, attendants listened to PhD in Pedagogy Jaime Fernández speak about the biblical vision of infancy and adolescence, and how to respond to contemporary challenges.

The prevention of child sexual abuse, hyper-connectivity and the search for purpose in life in a context of ‘workaholism’ were some of the issues addressed by experts in several workshops throughout the weekend.

Millennials and GenZ’s advance rapidly towards a fully digitalised society, said Jaime Fernández. These generations were born in a globalised world, and often prioritize jobs that make them feel good over well paid work.

Youtubers, trend makers and other influencers are the clearest examples of a growing individualism and the fear of being left out.

Secularism, speed and stress, science as a substitute for God, the search for pleasure and self-centerdeness are some of the characteristics of this generation, all of them can lead to negative attitudes such as pessimism, manipulation and a deterministic vision of life.

In contrast with this narrative, the biblical vision offers truth, which is Christ, security, love, compassion and a meaning for life based on faith and reason and experience, Fernández said.

In a second plenary session, Fernández spoke on how to teach responding to the challenges of today, based on the teaching of Jesus in the Gospels. Teachers should be passionate, expressive and creative, being clear in their language, letting every child or adolescent to think for themselves and apply what they learned. Jesus, the pedagogue said, taught counter-culturally.

Family should be a central channel of values for the young people, and parents should be proactive in living the Christian values in the secular context, through personal relationships and day to day witness.

Psychotherapist Silvia Villares, expert in sexual abuse, started her workshop talking about the need to look at the aggressors to help prevent child abuses. She distinguished between those who feel attraction towards minors aged 11 or less – paedophiles- ; and those who have reached the point of abusing a child – pederasts. She underlined that an attraction towards children, though very problematic, does not automatically turn a person into an abuser.

Psychologist Josep María Carayol finished a series on Building a Sexual Education saying that the affective-sexual education programs taught to children in schools will leave a lifelong footprint in the pupils, which makes it very important to have healthy educational programmes in this area in schools and institutes. Evangelicals in Spain have denounced regional and national laws that implement gender ideology education in primary and secondary schools.

Psychologist Ester Martínez addressed the issue of hyper-connectivity. She said the growing interaction with digital devices has interrupted face-to-face conversations between parents and children, while parents seem lost in a context that changes constantly. She also made the distinction between the distractions of the screens, which favours entertainment and cause procrastrination, and addiction, when the factor of leisure disappears.

The dangers of hyper-connectivity are several, Martínez said: responding to affective needs or rest, having difficulties to establish a correct order of priorities, the inflation of self-centeredness and the substitution of Bible reading for the use of screens.

The psychologist offered several advices to counter the excessive use of digital media, such as establishing schedules and limits to the use of mobile phones, and specific rules such as not using mobile phones during outdoor leisure times. Recovering the charm of a slow life, taking time for walks in the nature, taking time for mindfulness, reading before going to sleep and meeting friends regularly, were some of the other recommendations of Martínez to fight screen addictions.

Finally, therapist Eva Aldea defined ‘workaholics’ as people who have an uncontrolled and excessive need of working constantly, caused by professional ambition, financial problems or an incapacity of delegating tasks to other people. She also described what an abundant life looks like, which includes love and joy and a clear sense of direction when it comes to the life the person wants to live. The development of capacities, personal gifts and passions is often also not part of the lives of ‘workaholic’ people.

Besides the official program, presentations of other initiatives such as “Christian Educators”, “Compassion” and the platform “Do Not Mess with My Children” were presented during the gathering.