‘A Fortunate Shipwreck’ is a documentary that examines the emptiness of post-Christian society in Quebec after most people left the Catholic Church in the 1950s.

“We are orphans of answers”, says Pierre Maisonneuve, journalist and TV host, right at the beginning of L’Heureux Naufrage (‘The Fortunate Shipwreck’), a documentary about the emptiness of a post-Christian society, which includes interviews with leading figures in Quebec such as sociologists, philosophers, historians, artists and journalists.

The documentary tries not to give answers but rather to start a discussion as the director, Mr. Guillaume Tremblay, and producer, Ms. Xavie Jean-Bourgeault, explained in a debate after the premiere of the movie in Brussels, on Thursday 5th March.

The film wants to uncover the Christian past of Quebec and the important shift it experienced 60 years ago. When the French left in the 18th Century, the Catholic Church remained the base of social structure, but in 1950 there was this “shipwreck” and people stopped going to church because of the many abuses perpetrated by the institution. 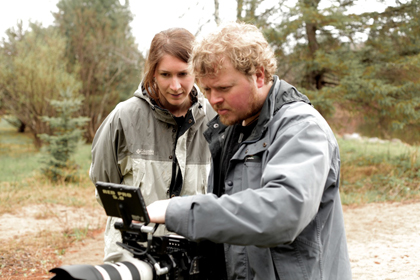 “We experienced a dramatic change and it is a reflection we have never made: who are we? What is good and bad about our Christian heritage?” stated Xavie Jean-Bourgeault, the producer.

“We needed to leave the ship together, but I think it was to find something better. We needed to make a distinction between institution and faith”, explained the director, Mr. Tremblay. “There are beautiful models that come from the freedom we have now”, added Ms. Jean-Bourgeault.

A DOCUMENTARY ABOUT DOUBT

The project started with almost nothing: a team of 3 people who started a campaign in all the regions of Quebec to finance the documentary. After one year, they had collected $70,000. “Our purpose was to see the current doubts and heartbreaks of the people we were interviewing”, Mr. Tremblay said.

“There are some questions to which the reason cannot answer. The problem is that those questions are the most interesting”, tells in the documentary Éric-Emmanuel Schmitt, a Belgian dramatist, novelist and filmmaker. As Mr. Tremblay explained, his favorite quote was from Stéphane Archambault, Quebecois artist: “We need to take our emptiness into our hands and talk about it”.

THE TITLE: A DOUBLE MEANING?

After the screening of the film, both the producer and director wanted to discuss about the similarities of Belgian and Quebecoise societies. 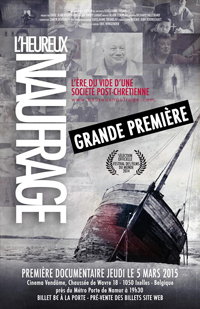 “Many Quebecois now turn towards Buddhism but we need to make peace with our past”, explained Ms. Jean-Bourgeault. In the audience, there were some comments that the title could be understood differently in Europe, such as a “merry” shipwreck, like the Titanic, were nobody realizes that the boat of “values” is sinking.

The discussion came back to those Christian values, a heritage that is positive and that even non-believers can share.

Mr. Tremblay insisted in the fact that the documentary was a beginning, a way to start conversations and ask questions: “I did the editing with a strong atheist in order to balance the quotes”. He then added, “I think the faithful atheist was really beautiful. We are so used to aggressive atheists!” He was talking about André Comte-Sponville, a French philosopher that proposes spirituality without God while keeping the good values of Christianity. However, as the French journalist and writer Jean-Claude Guillebaud says “if we cut those values from their roots, they become like flowers you put in a vase: in three days they are dead”.

“BLOWN BY THE GOSPELS”

“We turned our backs to an institution but at the same time, we turned our backs to the message”, continues Pierre Maisonneuve in the documentary. Many of the interviewed agreed that the gospels and Jesus had a very different message than the one sometimes Christian (and non-Christian) share and show. “I was blown by the gospels and the dimension they gave to love, a love that needs to replace fear between individuals”, explains Éric-Emmanuel Schmitt.

The producer of the film, Xavie Jean-Bourgeault, is also an anthropologist and studied native Canadians. They had to cut most of the parts of natives for the screening in Europe. In the discussion, however, she explained that the natives experienced most of the abuses and atrocities committed by the Catholic Church. “I think what is beautiful is that they made the difference [between institution and message]. They all talk about Jesus and they are a model of healing because they were able to forgive”.

On Friday the 6th is the premiere of L’Heureux Naufrage in Paris, in the Maison de Cultures du Monde, followed by a time for questions with the director Mr. Guillaume Tremblay and the philosopher André Compte-Sponville.