Archaeologists find evidence of the conquest of Jerusalem by Babylon

“Ash, arrowheads dating from the period, as well as Iron Age potsherds, lamps and a significant piece of period jewelry” have been unearthed. The findings appear to confirm the Biblical account of 2 Kings. 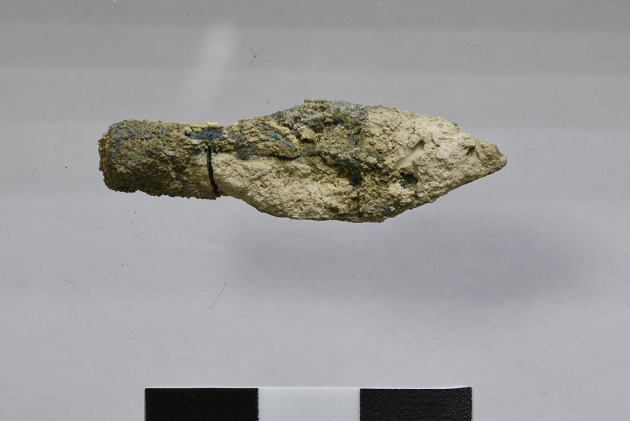 This is one of the Scythian type arrowheads found in the destruction layer from 587/586 BCE. / Mt Zion Archaeological Expedition/Virginia Withers

Archaeologists working in Jerusalem have found evidence that would confirm the Babylonian conquest of the city as accounted in the Bible.

Researchers of the North Carolina University (US) excavating on Mount Zion have discovered “a deposit including layers of ash, arrowheads dating from the period, as well as Iron Age potsherds, lamps and a significant piece of period jewelry - a gold and silver tassel or earring”.

Professor of History Shimon Gibson noted that this was a “clear indication of the wealth of the inhabitants of the city at the time of the siege”, prior to the conquest in 587/586 BCE.

“It is very exciting to be able to excavate the material signature of any given historical event, and even more so regarding an important historical event such as the Babylonian siege of Jerusalem”, said Rafi Lewis, a co-director on the project.

In a statement, the Mount Zion Archaeological Project described the find as very prominent “as the Babylonian conquest of Jerusalem is a major moment in Jewish history. The team believes that the newly-found deposit can be dated to the specific event of the conquest because of the unique mix of artifacts and materials found”. 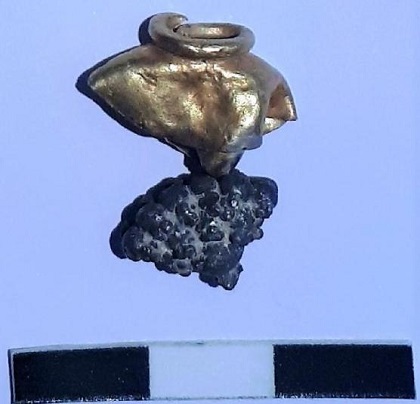 The recovered arrowheads, known as Scythian arrowheads, are “fairly commonplace” in battle sites from the 7th and 6th centuries BC, and were “known to be used by the Babylonian warriors”. “This evidence points to the historical conquest of the city by Babylon because the only major destruction we have in Jerusalem for this period is the conquest of 587/586 BCE”, Gibson said.

Gibson said: “For archaeologists, an ashen layer can mean a number of different things. It could be ashy deposits removed from ovens; or it could be localized burning of garbage. However, in this case, the combination of an ashy layer full of artifacts, mixed with arrowheads, and a very special ornament indicates some kind of devastation and destruction. Nobody abandons golden jewelry and nobody has arrowheads in their domestic refuse”.

The clay artifacts also help date the discovery. “It's the kind of jumble that you would expect to find in a ruined household following a raid or battle”, the leader of the project said. “Household objects, lamps, broken bits from pottery which had been overturned and shattered... and arrowheads and a piece of jewelry which might have been lost and buried in the destruction”.

“I like to think that we are excavating inside one of the 'Great Man's houses' mentioned in the second book of Kings 25:9”, Gibson speculated. “This spot would have been at an ideal location, situated as it is close to the western summit of the city with a good view overlooking Solomon's Temple and Mount Moriah to the north-east. We have high expectations of finding much more of the Iron Age city in future seasons of work”.

This is how 2 Kings 25:1-17 describes the Babylonian siege of Jerusalem:

And in the ninth year of his reign, in the tenth month, on the tenth day of the month, Nebuchadnezzar king of Babylon came with all his army against Jerusalem and laid siege to it. And they built siege works all round it. So the city was besieged till the eleventh year of King Zedekiah.  On the ninth day of the fourth month the famine was so severe in the city that there was no food for the people of the land. Then a breach was made in the city, and all the men of war fled by night by the way of the gate between the two walls, by the king’s garden, though the Chaldeans were round the city. And they went in the direction of the Arabah. 5 But the army of the Chaldeans pursued the king and overtook him in the plains of Jericho, and all his army was scattered from him. Then they captured the king and brought him up to the king of Babylon at Riblah, and they passed sentence on him. They slaughtered the sons of Zedekiah before his eyes, and put out the eyes of Zedekiah and bound him in chains and took him to Babylon.

And the pillars of bronze that were in the house of the Lord, and the stands and the bronze sea that were in the house of the Lord, the Chaldeans broke in pieces and carried the bronze to Babylon. And they took away the pots and the shovels and the snuffers and the dishes for incense and all the vessels of bronze used in the temple service, the firepans also and the bowls. What was of gold the captain of the guard took away as gold, and what was of silver, as silver. As for the two pillars, the one sea, and the stands that Solomon had made for the house of the Lord, the bronze of all these vessels was beyond weight. The height of one pillar was eighteen cubits, and on it was a capital of bronze. The height of the capital was three cubits. A latticework and pomegranates, all of bronze, were all round the capital. And the second pillar had the same, with the latticework. (ESV version)

Every year Jews in Israel and across the world pray and fast on Tisha B’Av in remembrance of the destruction of the Jewish Temple to God in Jerusalem, by the Babylonians in 587/586 BCE, and yet again in 70 CE at the hands of the Roman legions led by Titus.

Published in: Evangelical Focus - culture - Archaeologists find evidence of the conquest of Jerusalem by Babylon