Some were not interested in losing their power and corrupt privileges. Others preferred to continue their religious life with a “straw God”. 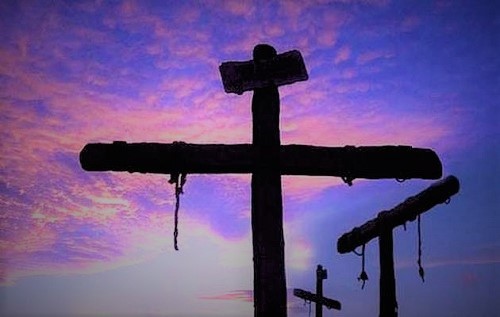 We, the inhabitants of this planet, condemned him to die a slow and cruel death. We could say ‘I was not there’ but the truth is that there were our perfect representatives.

Some were not interested in losing their power and their corrupt privileges. Others preferred to continue their religious life with a “straw God”. Some did not care about the crucifixion of the only perfect man, because they thought it had nothing to do with them.

And others, his disciples, which loved him and followed him, chose to abandon him when they had to choose between his faithfulness and saving their own life.

Jesus knew all this would happen. And he had said: “I lay down my life of my own accord”. But his life and death put us all in evidence.

“This is the verdict: light has come into the world, but people loved darkness instead of light because their deeds were evil”. Faced with his light, we only can weep as Peter did. Although some still prefer to wash their hands like Pilate, or even hang themselves as Judas.

But Jesus was not defeated. He rose. He came back to life. An irrational idea? That is what the disciples believed when Mary first told them she had seen Jesus. Later, the very same sceptic disciples were telling everyone that it was true: He lives and reigns forever, and will come again to judge the living and the death.

Let’s not fill our life with years. To the contrary, let’s trust in Him who can fill our years here with life. A life that only can be given to us by the One who loved us to the point of dying for us on a Cross. We are guilty. But he gave us a new Life.

Published in: Evangelical Focus - Editorial - We are guilty