Week of Prayer united many to intercede for current challenges

Praying in groups, during the Week of Prayer in a Spanish church. / AEE

Hundreds of cities around the World saw how believers of diverse evangelical communities united to start 2015 in prayer.

This year’s Week of Prayer (12th-18th January) focused on The Lord’s Prayer in Matthew 6, following a guide prepared by the Association of Evangelicals in Africa. Believers in Europe also prayed for answers to the financial crisis and to corruption, as well as for future evangelistic initiatives.

The Week of Prayer is one of the main events which achieves to unite Evangelicals in many European countries. Believers visit other churches, pray for Christians they had not met before and commit together to future initiatives to reach their cities with the gospel.

Leaders of the Evangelical Alliances in Czech Republic, Spain and Italy shared their impressions after last week’s events.

QUESTION. What would you highlight from last week’s meetings in your country?

Jiri Unger, Czech Republic: This year we have produced our own materials and prayer guide and its main topic was taken from Isaiah 61:11 “the Lord GOD will cause righteousness and to sprout up“.  Churches organised prayer meetings across the whole country praying for issues related to justice. They prayed for policemen and their families, judicial system and justice but also  against corruption, human trafficking and sex trade. One day was focused on prayers and intercession for victims of crime but also for offenders and prisoners, prison chaplains and ministry and integration of ex-offenders. The whole week of prayer highlighted what it means to be a follower and disciple of the God of justice and righteousness.

Jaume Llenas, Spain: This is one of the most significant events for the Church in and it has been from 1877. This was the first united event of the evangelical churches in Spain and in many versions and different ways of celebrating, it remains as one of the most attended.

Stefano Bogliolo, Italy: The Prayer Week is a unique opportunity for churches and individual believers to meet for prayer. More churches are discovering it and it has a great potential, although there is still a great work to be done, for many others to do the same. 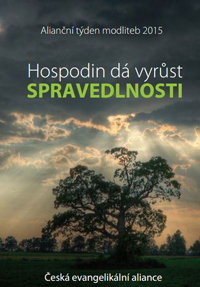 QUESTION. Why does prayer unite people?

J.L, Spain: Probably, because we focus on God instead on us. When we pray we see how mighty He is and how needed we are.

S.B, Italy: The invocation of the Lord’s prayer says “Our father”. So as the very heart of prayer there is a communal recognition of God being our father. So prayer is an act of the Christian community.

J.U, Czech Republic: The Prayer Week is a unique opportunity to start a new year in prayer together with believers from other denominations. In most places, churches invite a preacher from a different congregation and denomination to lead prayer services in their own (hosting) congregation and in this way Christians build relations and get to know each other more. In most places this Week of Prayer is a basis for continuing local cooperation of churches.

QUESTION. What topics of your specific national context have you been praying for?

S.B, Italy: Apart from the topics that were suggested in the programme, churches prayed for the international situation that Europe is going through (e.g. economic crisis, threats of Islam) and the desire to be a vibrant witness for the Gospel in a needy nation.

J.L, Spain: Specific subjects have been the “Festival de la Esperanza” in Barcelona in May, an evangelistic event prepared by the churches with the Billy Graham Evangelistic Association.

J.U, Czech Republic: Apart from already mentioned topics, I would highlight prayers for Roma people who are the most vulnerable group concerning racism, discrimination, unemployment, drug abuse etc. We blessed them and prayer also for their leaders, their churches and preachers. We also prayed for people in material poverty and relational poverty – homeless, HIV positive, prostitutes, offenders and their families, kids in the institutional care, orphans, refugees, victims of home violence etc.

Published in: Evangelical Focus - europe - Week of Prayer united many to intercede for current challenges