Jesus for the Jews and for the Arabs

Irina Volodrska (Jews For Jesus, Ukraine) and Elia Daoud (Evangelical Alliance of Arabic Speakers in Europe) speak about how they share the gospel with their own people. 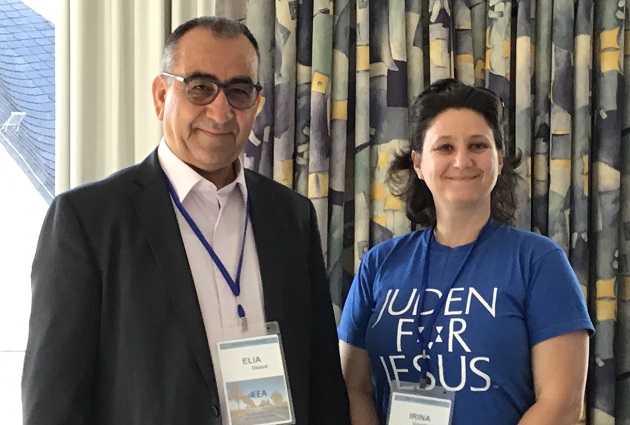 The last European Evangelical Alliance gathering in Germany served to bring together a range of ministries and mission platforms working in Europe.

Among them were Irina Volodrska, Publication Director of Jews for Jesus, and Pastor Elia Daoud, Chair of the Evangelical Alliance of Arabic Speakers in Europe.

At one point of the conference, the Ukranian of Jewish background and the Iraqi living in Germany, were asked to share about how they share the gospel to their own cultural contexts. They also prayed and blessed each other in Christ.

In a quieter moment, they sat together to have share a brief conversation about their common faith.

Question. How do you combine your Jewish or Arab identity with your faith in Jesus?

Irina. I found out that I was Jewish when I was already in school. I think I was eleven when my mother first explained me that we were Jewish, and that many people did not like us. I had to overcome some - not bullying - but people using the description of us Jewish people as a bad thing. For years, the only thing I knew about that is if you are Jewish, then people hate you.

When I came to know the Lord, my whole family was very upset. Not just because I became a Christian, but because I started to believe in God - they were Atheists.

They told me: “If you go to a Christian church, people will kick you out”. I did not believe it at first, and one day one of the deacons asked me: “Hey Irina, do you happen to be Jewish?” I said: “Yes, I am”, and he responded: “Good! The Bible says you have blessing upon blessing”. This deacon also prompted me to research my Jewish background, to go to a special Jewish Sunday school, to learn everything I did not know yet... Later, I went to a Jewish university to keep learning more about my background.

For me, being Jewish was always amplified by being a believer in Christ. After finishing my studies, I came in touch with “Jews for Jesus”. It was like a combination of everything that I am: me being Jewish and me being a believer. I wanted to tell everybody about it. That is how I keep that balance in my life.

Elia. When we speak about the contact between these two big groups, Jews and Arabs - we can live together. Arabs and Jewish live together in the same country now, so we pray that they can find the peace and they can coexist.

We pray that the hate between these two groups will not exist in the future. We try and we work to tell the nations about the love of God, to tell them that we cannot follow anyone else. He is our Lord and He loves us all through Jesus Christ.

Question. How can the gospel bring reconciliation to situations where it is has proven almost impossible? How can new converted people in Arab and Jewish contexts understand what reconciliation means in practice?

Irina.  For Jewish people, reconciliation can be seen for many different angles.

For instance, there are Christians that come to church, who are basically anti-Semitic, I have experienced this with friends. They were brought up that way, and they do not realise this reality. So I try to explain that certain things they do or say are wrong for me as a Jewish person. If I speak the truth in love, as the Bible says, it can bring a lot of reconciliation.

When we preach the gospel to the Jewish people, it is also very important to know that they do not want to go to a church, it is very strange for them. It would be like inviting a Jewish person to start attending a mosque. But when you show them love, when you show them real believers in Jesus who really love them and who can serve them, that brings reconciliation.

Elia. I think that the gospel makes us to be different. We share Jesus and the good news, we have this message to bring to all the nations, Arabs or Jews. The Jewish people also need to be a part of these good news.

Jesus rose up, He forgave us, Jesus saved us. And those are good news through which we can live together. We have a short time, we need each other, and I pray that all the nations come to Jesus. 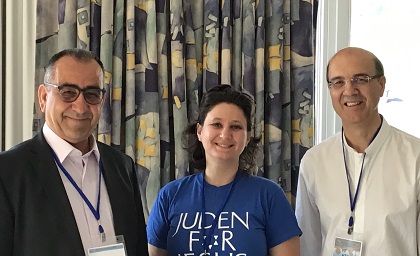 Question. How do you understand the concept of “shalom” in your own Christian experience?

Irina. My name actually means ‘peace’ in Greek, so when I speak at churches, I say: “I come to you with double peace, ‘shalom’”.

God brings “shalom” to our souls and minds. His “shalom” surpasses our understanding so much. In situations when something drastic and terrible is happening, He gives “shalom”, He calms us down.

I remember the first time I went out to the streets with Jews for Jesus literature. I was wearing a t-shirt that says ‘Jews for Jesus’ in Russian and Ukrainian. A very old gentleman suddenly came out to me, with a very angry expression in his face, and said: “If I were your grandfather, I would spank you right now”. He added: “How could you be a traitor to your people? What are you doing here?” He had a cane and he went at me with it, I was sure he would just hit me.

At first I was afraid, but then I realised he was just an old Jewish man who thought I was attacking our people. I started to talk very calmly to him about God love, about Jesus being the Jewish Messiah. In Ukraine, many are sure that Jesus is Ukrainian, in Russia they say he is Russian. I was telling this man, very quietly, that Jesus loves him too, that Jesus loves the Jewish people, He came to save Jewish people. He gradually calmed down, and by the end of the conversation, he gave me his information to get more literature about Jesus. Jesus gives peace, “shalom”.

Published in: Evangelical Focus - europe - Jesus for the Jews and for the Arabs