One recurring theme at EEA events was the authority of Scripture. Especially during the 1960s, the battle against modern theology attracted considerable attention, leading finally to a declaration in 1965. 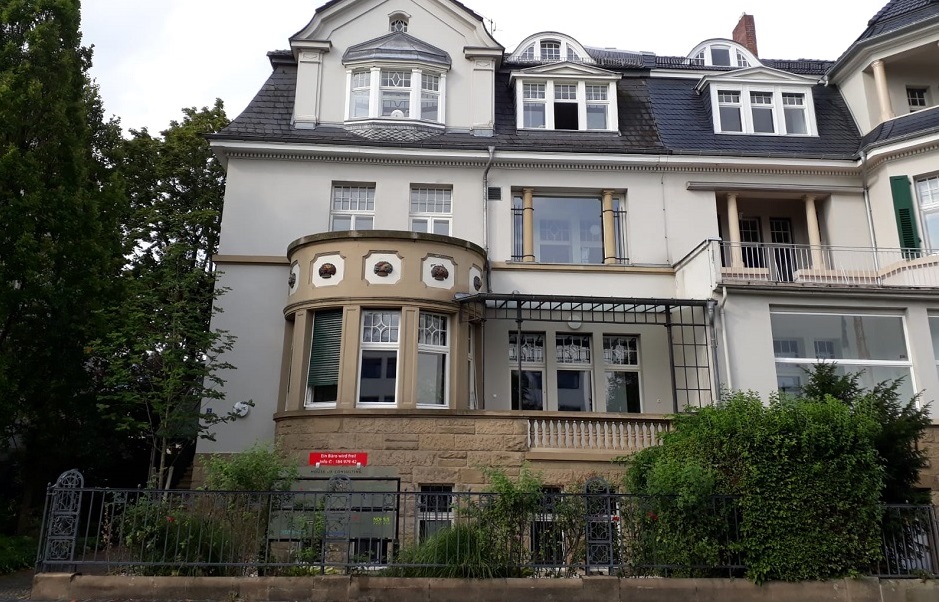 In 1946, the World Evangelical Alliance (WEA) was celebrating its 100th anniversary. Up to that time, the British Evangelical Alliance (BEA) had been the main driving force behind the WEA. However, in the years following World War II, the BEA went through a crisis and was not able to adequately provide leadership to the WEA.

Meanwhile, a new evangelical movement was coalescing. Following the war, North American Christians became increasingly interested in cooperation with Christians in Europe (1) and beyond. The National Association of Evangelicals (NAE) thus emerged as a key player in the further development and renewal of the global evangelical movement (2). The NAE held to the classic evangelical beliefs and to the authority of Scripture yet rejected the polemical and separatist approach of fundamentalism. The so-called ‘new evangelicals’ driving this effort included such key figures as Harold John Ockenga and Billy Graham.

When the NAE initiated the establishment of a new global evangelical body in 1952, calling it the World Evangelical Fellowship, evangelicals in a number of European countries struggled with what they perceived as a North American fundamentalist takeover, especially in light of the WEF’s position on Scripture. The use of the term ‘infallible’ became an obstacle. This concern led to the founding of the European Evangelical Alliance (EEA) as a counter-movement to the WEF, with the Scandinavian countries, Germany and the German-speaking part of Switzerland serving as the main drivers of this process. Along with some theological difference regarding how to view Scripture, some Europeans, especially the Scandinavians, felt a distaste for the NAE’s anti-ecumenical scepticism and did not want to position themselves against the World Council of Churches (WCC).

The founding members of the EEA were the national evangelical alliances (EAs) of Denmark, Norway, Sweden, Germany, Switzerland and Austria (3). Soon afterwards, the BEA also joined, becoming a member of both the WEF and EEA. France joined the EEA in 1956 and Spain in 1965. These two EAs had already been members of the WEF, but most EEA founding members did not join the WEF until the late 1960s.

Interestingly, the earliest constitution of the EEA from the early 1950s only described how the organization would operate and hardly touched on the question of mission and vision. It stated simply, ‘The founding of the “European Evangelical Alliance” is due to practical reasons. It should strengthen togetherness, and the outer and inner exchange amongst one another and with other groups should be promoted.’ (4) (Even the original German gives no hint at the meaning of ‘outer and inner exchange’.)

Few extant sources offer insight into the EEA’s mission and vision during its first two decades, but the programmes from EEA General Council meetings (GCMs) reveal a heavy emphasis on theological concerns. At each annual GCM, lectures were delivered, usually by well-known evangelical theologians from the country where the GCM was taking place. Sample topics were ‘The Meaning of the New Testament about the Unity of the Church of Christ as Foundation of the Evangelical Alliance’ (1956), ‘The Place of the Holy Spirit in Witness and in Evangelism’ (1964), ‘The Meaning of the Roman Catholic Council in Light of the Bible’ (1964), ‘Should We Defend Fundamentalism?’ (1965), and ‘The Meaning of New Testament Words in “Modern” Theology’ (1966).

In 1962, the GCM approved a resolution that summarized the EEA’s main focus well:

From its foundation, the Evangelical Alliance sees itself as a brotherhood of Christ believers from churches and free churches. It sees its mission in unceasing personal and common prayer. It confesses the whole of the Holy Scriptures of the Old and New Testaments as the sole and fully sufficient foundation of its faith and life. From here the Evangelical Alliance's most urgent tasks are the evangelistic proclamation of the message of salvation for everyone, the encouragement of all Christians to a credible proof of life and a Bible-oriented ministry of watchfulness over all heresies of our time. (5)

One recurring theme at EEA events was the authority of Scripture. Especially during the 1960s, the battle against modern theology attracted considerable attention, leading finally to a declaration on the authority of Scripture in 1965, which had been three years in the making (6). This statement targeted the growing influence of theological liberalism deeply rooted in many of the traditional Protestant denominations in areas such as Germany, Switzerland and Scandinavia. As another example, Walter Künneth from Erlangen, Germany, spoke at the EEA Council Meeting in London in September 1968 on ‘The Foundational Crisis of Today’s Theology.

A second consistent aspect of the EEA was its focus on prayer. As Rev. Peder Olson of Norway worded it in 1964, the characteristic feature of the EEA was corporate prayer, especially during an annual week of prayer (7) each January.

Third, evangelism was a central theme. As early as 1954, the EEA endorsed Billy Graham’s European rallies, inviting him to return for further evangelistic campaigns in 1955 (8) and thereafter. During this time, a Danish representative even suggested at one GCM that the EEA should become an evangelistic organization (9). Although this proposal was not taken up by other national EAs, focus on evangelism remained strong and new ways to proclaim the Gospel in Europe were considered. As a result of these discussions, opportunities for evangelistic radio broadcasts moved to the forefront of the agenda for several years. (10)

The relationship between the EEA and the WEF remained controversial and tense for some time (11). In October 1960, a joint gathering of the WEF and EEA took place in Tonbridge, England. Swiss delegate Traugott Huber, in his report on the event, objected that the GCM had more of the character of an ‘alliance conference’ (even though the EEA still treated it as its own council meeting) and that it wasn’t clear at all what was EEA and what was WEF at the gathering.

Indubitably, Huber wanted to see a clearer distinction between the two groups (12). He referred to what he had perceived as a strong International Council of Christian Churches (ICCC) influence at the WEF’s founding conference in the Netherlands, where the WCC was repeatedly called (probably by NAE representatives) a ‘terrible association’. In concluding his observations regarding the 1960 meeting, he urged the Swiss EA to clarify the nature, purpose and calling of the EEA while also encouraging the EEA to clarify the ‘marking of lines’ between the groups.

Huber may have been a relatively extreme voice on the anti-WEF front, but things began to change only in 1962 when Gilbert W. Kirby, General Secretary of the British EA, also became Secretary General of the WEF (13). At the September 1967 GCM in Vienna, the topic was finally resolved. Rev. M. Derham of London presented a paper on the WEF, clearly stating that the ‘fundamentalist American influence within the WEF has strongly diminished’ (14) and recommending that the EEA become the WEF’s regional branch. After intense discussion, the council voted unanimously to encourage all EEA member countries to also join the WEF (15). All except Austria and Sweden (which only sent two observers to WEF’s General Assembly in Lausanne) did so by the end of 1968. (16)

Although several documents expressed caution regarding the fundamentalist ICCC, there seems to have been far less reluctance to connect with key WCC leaders. In fact, WCC General Secretary W. A. Vissert’t Hooft was one of the main speakers at the 1956 GCM. He presented a paper on ‘The Uniting of the Children of God in the World’, followed by an open discussion (17). Some years later, the EEA board met with Paul Vischer, then research secretary of the WCC, primarily to discuss the relationship between the EEA’s week of prayer and the ecumenical ‘Week of Prayer for Christian Unity’, both of which occurred each January. Although the meeting ‘took place in good atmosphere’, ‘no practical conclusions were drawn’. (18)

The EEA’s attitude towards the WCC remained surprisingly positive despite some growing theological differences. Only following the fourth WCC Assembly in July 1968 at Uppsala, Sweden, did the EEA president, in his annual report, express concern about developments within the ecumenical movement, stating that the EEA ‘doesn’t have an unreserved and unconditional yes to the path of ecumenism’. (19)

At a more practical and organizational level, two issues arose repeatedly during the EEA’s first two decades: finances and the need for a general secretary. As early as 1954, the GCM minutes indicated that ‘the need of a part-time and soon a full-time general secretary and a common treasury to support the same was discussed’. Proposed duties included encouraging inter-denominational fellowship, stimulating and organizing evangelism, making presentations, assisting the national EAs, organizing rallies and conferences, and producing literature. Several countries’ representatives spoke favourably about working towards retaining a general secretary. (20)

The head of the Danish EA took on the role of general secretary temporarily on a voluntary basis. Not until the late 1960s, however, did the EEA officially create the position, and even then it remained unpaid, usually being filled by a member of either the British or German EA. Even the question of whether the EEA should have a bank account and budget was still under dispute in 1963. (21)

This is the first part of an essay about the history of the European Evangelical Alliance. Part two will be published next week. A printed booklet of the whole essay can be purchased at the price of € 2.50 plus shipping costs at: [email protected].

2. Joel Carpenter, Revive Us Again: The Reawakening of American Fundamentalism (New York: Oxford University Press, 1997), 141ff., describes the founding of the NAE, showing why it did not represent simply a continuation of the Evangelical Alliance of the nineteenth century. See also Robert L. Kennedy, Turning Westward: Anglo-American Evangelicals and German Pietist Interactions through 1954 (PhD dissertation, University of Aberdeen, 1988), 338ff.

6. The development of this declaration was commissioned at the 1962 GCM; see ‘Tagung des Rates’, 10.

11. See for example the November 1957 letter from Arthur F. Smith, BEA chairman and WEF president, and Gilbert W. Kirby, General Secretary of the BEA, to the EEA members, expressing ‘shock’ about the ‘ignorance and the misunderstanding concerning’ the WEF.

17. Programme of the annual conference of the European Evangelical Alliance in Bern, 18–21 September 1956.