There they are, three of them, gleaming, embedded in the pavement: Stolpersteine. I am passing through Belgická, a street close to our house. I'm walking there for the umpteenth time and never once before these golden squares caught my eye. 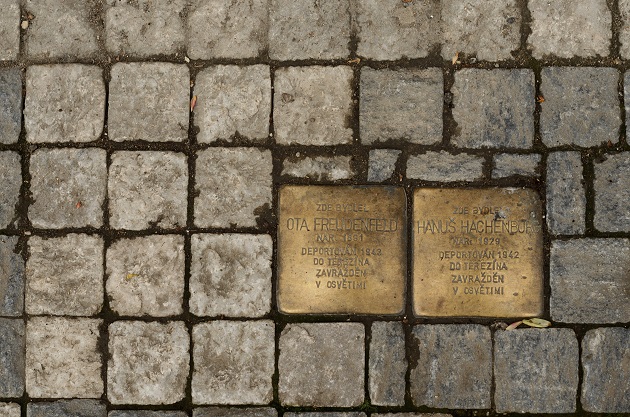 There they are, three of them, gleaming, embedded in the pavement: Stolpersteine. I am passing through Belgická, a street close to our house. I'm walking there for the umpteenth time and never once before these golden squares caught my eye. But now, having recently heard about them, I see them as well. Small square stones in front of houses, all over the city. 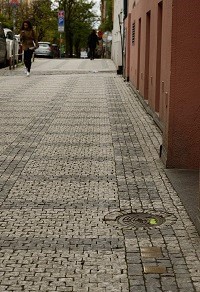 They're a reminder for passers-by that from these houses people were deported during WWII. People who had no idea what awaited them were suddenly taken away to concentration or extermination camps. The stones are a silent but expressive reminder: “Here lived Ota Freudenfeld, born in 1891. Deported to Theresienstadt in 1943. Died in Auschwitch.” A whole tragedy summed up in three sentences and secured in the pavement. And at the same time it doesn't say anything at all. I keep thinking about it while I continue my way. The few square centimeters are totally insufficient to do justice to the suffering they represent. But that's probably realistic, for what could do justice to that? How is it possible that I have passed these stones so often without ever noticing them, I'm wondering.

A quick search on internet tells me that the Stolpersteine are all over Europe. The idea seems to be based on an expression that was used in Germany before the Holocaust, by non-Jews when they stumbled over protruding stones in the street: “There must be a jew buried here.” That isn't a very sensitive comment if you ask me, so I really appreciate the symbolic twist that has been given to it by introducing the Stolpersteine.

The creator of the Stolperstein is Gunter Demnig. With these stones he wants to commemorate victims of Nazi persecution, mainly Jews, but also Roma, homosexuals and Jehovah Witnesses, and let them symbolically return to the neighbourhood where they lived before they were deported. In January 2015 Stolperstein number 50,000 was installed in Turin, Italy. On the Internet are lists of countries and cities where Stolpersteine are to be found. 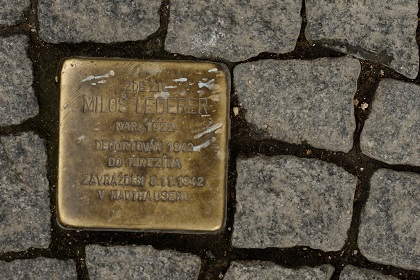 Meanwhile to me the Stolpersteine have become real stumbling stones. They don't leave me alone. The message on the stones touches me deeply, but mostly by what's NOT written on them, and what I have to guess about the people and their lives. It's a good reason to discuss this at the dinner table in these weeks leading up to Liberation Day. And then my children tell me they have been seeing the stones for a long time, but because of the text in Czech they never understood what they represented. We talk about how disastrous things can end up when people think they have the right to take away the freedom of others. And how even today many people continue to be persecuted for their beliefs or ethnic background.

I hope that many people will stumble over a Stolperstein. Ota and  Hanuš and so many others must not be forgotten, nor the price they paid for who they were or what they believed. If that causes an uneasy afternoon here and there, that's ok.

As long as we don't forget.