It swallows the sand to filter it and then expels it through its gills, thus retaining crustaceans, amphipods, polychaetes, molluscs and tiny fish. 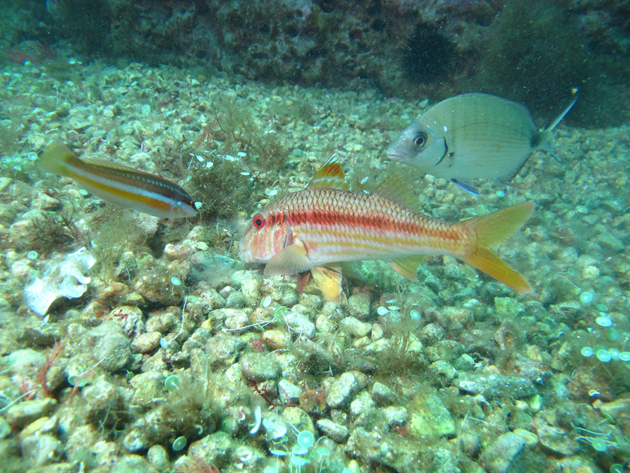 Every time I look at it I am astonished by the behaviour of this little fish. It is the rock mullet (Mullus surmuletus), in the centre of the picture, which I photographed at the Medes islands in Estartit, Girona (Spain).

It never stops digging into the sea-bed with the aid of its long whiskers. It stirs up the sediment and sinks its head into it in search of the prey that it feeds on. It then swallows the sand to filter it and then expels it through its gills, thus retaining crustaceans, amphipods, polychaetes, molluscs and tiny fish. This activity by the rock mullet raises clouds of marine sediment replete with microscopic prey, which also attract other species. The fish that come to dine take advantage of the mullet’s work, but without harming it in any way.

Among us humans there are also many “diners” who take advantage of the work done by others. This is the way it has been since the dawn of time, and, in fact, it is one of the foundational features of the family, the church and society.

Giving food to the hungry and drink to the thirsty, helping the weak and needy, teaching the unlearned, listening, sharing, caring, counselling, giving to others, etc., are the little tiles that make up the mosaic that every Christian walks on. However, the “diner” is also called, insofar as it is possible, not to disadvantage the helper, not to bite the hand that feeds them. Solidarity must be grounded in justice and fairness.