Cheating and deceit may benefit us in the short term, but in the longer term they will take us away from God’s presence and from his purpose. 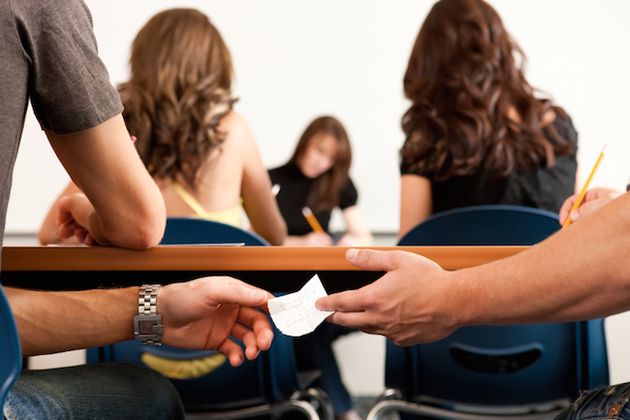 Do you remember when you were at school and you had certain rhymes that you chanted to other children.

When somebody called you a name, you would try to shrug it off with, “Sticks and stones may break my bones, but names will never hurt me” - which actually is totally untrue, as our words have much more power than we often think. At my junior school when we thought somebody was cheating in a playground game we would all chant in unison, “Cheat, cheat, never beat!” - in other words, cheats will never win. Is that true?

Cheating involves defrauding, deceiving somebody. The Bible tells us, Food gained by fraud tastes sweet to a person, but he ends up with a mouth full of gravel (Proverbs 20:17). And David testifies, You are a God who destroys those who tell lies; bloodthirsty and deceitful people the Lord abhors (Psalm 5:6).

Yet today we not only see the ‘traditional’ con man or woman swindling people out of their money and possessions, but corporate fraud which becomes ever more complex and lucrative, and internet and telephone scams and frauds at unprecedented levels. Do all the people involved in these frauds end up with a mouth full of gravel? Does the Lord destroy them all, as the Psalm seems to imply?

According to the Bible (Genesis 29-31) and other Jewish writings – and we have nothing else to go on – Laban was a cheat, a deceiver. He was the brother of Rebecca, Jacob’s mother and Isaac’s wife. When Jacob had to flee from his home for fear of his brother taking revenge on him and killing him, his mother sent him to where she had grown up, to her brother’s home, well out of the way in upper Mesopotamia (modern day NE Syria).

Laban soon realised that he was on to a good thing, as his nephew Jacob proved to be a good worker. Jacob had fallen in love with his stunningly beautiful younger daughter, Rachel. So Laban agreed that he would work for seven years to be able to marry her (in place of a dowry, which was necessary in that culture). He served the seven years for Rachel, and they only seemed like a few days to him because of his love for her (Genesis 29:20).

However, on the wedding night Laban cheated Jacob by switching daughters, on the pretext of some local custom; and Jacob found in the morning that he had been making love to and sleeping with Leah, Rachel’s older and much plainer sister. Evidently in those days they did everything in total darkness!

Jacob worked another seven years for Laban in order to marry Rachel. Then he decided that it was high time that he acquired some flocks and herds of his own. Laban agreed that he could have all the goats and sheep of a certain colour, but then immediately took all the animals of that colour out of the flock and hid them. Jacob, with help from God, overcame this deception, so Laban changed his wages to try to stop him acquiring sheep and goats.

Jacob overcame Laban’s cheating again, so Laban changed his wages again – and this happened at least 10 times. Through it all, Jacob prospered so much that Laban and his sons became jealous of him, so that ultimately he had to secretly run away from Laban’s home with his wives, his children and his possessions.

So, did Laban the cheat prosper? Apparently not. He had very little when Jacob arrived at his home, and it was Jacob who increased his flocks and herds (Genesis 30:29-30). 20 years later, when they finally parted company with each other, Laban had used up all that he had received from Jacob and God had taken his wealth away from him and given it to Jacob (Genesis 31:15-16).

Indeed, just before they say goodbye, Jacob tells Laban, If the God of Abraham had not been with me, you would surely have sent me away empty-handed. But God has seen my hardships and the toil of my hands, and last night he rebuked you (Genesis 31:42).

Yes, God actively opposes those who cheat; there is a mechanism in the world that ensures that cheats do not prosper. However, this world is not functioning as God intended it. There is a kink in it, as a result of the entrance of sin – which means that sometimes cheats are not discovered and sometimes they do prosper. Laban did not become prosperous, however hard he tried to cheat. But at the same time there are people who do cheat and seem to grow rich on it.

More important than material prosperity is our standing with God. Laban, after parting company with Jacob, disappears completely from the Biblical narrative. He and his descendants are never mentioned again, for they have become irrelevant. They have stepped outside the purposes of God through their cheating and they have not turned back to him.

David says, speaking prophetically as that greater Son of David, Jesus: No-one who practices deceit will dwell in my house; no-one who speaks falsely will stand in my presence (Psalm 101:7). Cheating and deceit may benefit us in the short term, but in the longer term they will take us away from God’s presence and from his purposes – and that is an awful fate. The only way back from it is confession and repentance – and sadly, Laban and his family did not take that route.