Did Jesus Really Go to Hell?

Just what happened on Holy Saturday? 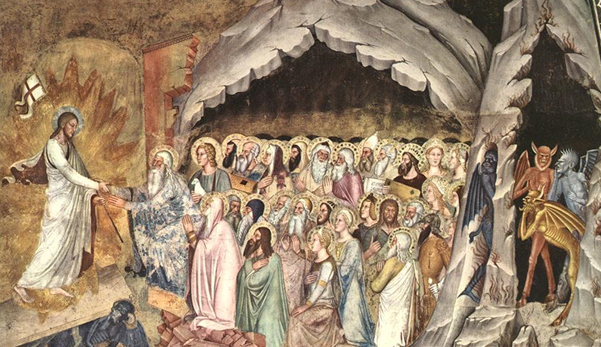 The same can be said regarding the history of theology. You can find plenty of tomes on the crucifixion and the resurrection of Christ; but very little about what went on between those two sacred events. Just where did Jesus go to? What happened to His soul after He died and before He rose?

1 Peter 4:6 has become something of a key verse in this sense. It reads, “For this cause was the Gospel preached also to them that are dead, that they might be judged according to men in the flesh, but live according to God in the spirit”.

This verse, coupled with 1 Peter 3:19-20, seem to make the case that Jesus did in fact go to preach in hell once deceased. This second passage says, “By which also He went and preached unto the spirits in prison; which sometime were disobedient, when once the longsuffering of God waited in the days of Noah, while the ark was a preparing, wherein few, that is, eight souls were saved by water”.

So, did Jesus really go to hell? Let’s do some reflecting!

There are four main views with respect to 1 Peter 4:6. We’ll go one by one.

The first interpretation of 1 Peter 4:6 is that Christ literally descended to hell so as to save damned souls in hell. He wanted to issue the Gospel message so that those who died without Christ before His incarnation could be redeemed.

Nevertheless, such a hermeneutic slam dunks a clear and unambiguous biblical teaching, namely, that after this life there are no second opportunities. Hebrews 9:27 makes it crystal clear that it is appointed unto men once to die and after this, the judgment. The impenitent have no hope of repentance.

Moreover, the very notion that Jesus descended to hell is not even biblical language. It is language extracted from the Apostolic Creed and it could simply allude to the great suffering which the Saviour experienced to redeem us.

It should also be stated from a purely linguistic point of view that in 1 Peter 4:6, the apostle nowhere states that Jesus went to preach in hell. It is something that interpreters read into the text.

2.- Interpretation #2: The Bosom of Abraham

The second reading of 1 Peter 4:6 is perhaps the most popular because it is the position of the Roman Catholic Church. The Vatican understands that Jesus, upon dying, went to a department of Sheol or Hades named the Bosom of Abraham where the righteous souls of the Old Testament were awaiting liberation.

Article 633 of the Catechism of the Catholic Church declares, “It is precisely these holy souls, who awaited their Saviour in Abraham’s Bosom, whom Christ the Lord delivered when He descended into hell”.

Now, once more, linguistically speaking, notice two things: that at no point in the verse does the apostle utter a word about Jesus descending to Abraham’s Bosom or preaching to the saints of the Old Testament.

A third criticism of this proposal is that the immediate context surrounding verse 6 has nothing to do with Abraham’s Bosom but about afflictions, persecution and troubles for holding onto the Gospel. Up to this point, the Spirit of God has divided 1 Peter into four main sections: the Gospel (1:1-12); sanctification (1:13-2:10); submission (2:11-3:12); and from 3:13 onwards, the theme is persecution.

The Spirit utilizes long lines of argumentation throughout the letter. It just wouldn’t make sense for Peter to get sidetracked by the underworld when talking about Gospel-caused tribulations.

Criticism number four is that the Old Testament saints already believed in the coming Messiah. They were all justified by faith in Christ just as we Gentiles are. No Old Testament saint died without the knowledge of the Lord Jesus. Jesus had no need of preaching the Gospel to those who already hoped in it.

Abraham himself is a good example. Galatians 3:8 says quite specifically that the Gospel was preached unto the father of the faith. Jesus also made it plain that Abraham saw Christ’s day and he rejoiced to see it. Abraham, and those who are of the seed of faith, all believed in coming redemption. They were by no means Gospel-ignorant.

Number five: Christ often prophesied of His death and resurrection but He nowhere makes mention of a descent to the Bosom of Abraham. Even upon the cross, He said nothing about heading to the Department of the Righteous. What He did say was the following, “Verily I say unto you, Today you shall be with me in paradise” (Luke 23:43). He said “paradise”, not Abraham’s Bosom.

And again, “Father, into your hands I commend my spirit” (Luke 23:46). Jesus’ spirit, then, was directed towards the Father in paradise; not Abraham’s Bosom. Some believe that “paradise” is a synonym of Abraham’s Bosom; but Scripture begs to differ. Both 2 Corinthians 12:4 and Revelation 2:7 are explicit texts referring to paradise as heaven.

The sixth counter-argument is that the Bible verses employed by Rome to defend their dogma are notoriously ambiguous. The Catechism cites ten New Testaments. Some of them have nothing to do with the question at hand and most have a more sober interpretation.

Not one of the texts says a thing about the Bosom of Abraham.

Now, it is true that in one moment of His ministry, Jesus did indeed teach upon Abraham’s Bosom. That place is Luke 16:19-31. But according to the Talmud, the expression ‘Abraham’s Bosom’ is another way of talking about heaven. After all, is not Abraham in the presence of God? This, then, would be our seventh argument against the Roman Catholic view.

The seven criticism of this second view are: 1) Peter doesn’t say Jesus preached to the Old Testament saints; 2) nor does he say Christ preached in Abraham’s Bosom; 3) the Spirit of God uses lines of thought, it wouldn’t make sense for Peter to change his theme all of a sudden; 4) the Old Testament saints already believed in the Messiah; 5) Jesus said He was going to His Father in paradise; 6) the texts used by the Vatican don’t fit; and 7) Abraham’s Bosom means heaven.

It is possible that somebody might object at this point asking, “What do we do with the aforementioned text regarding imprisoned spirits in 1 Peter 3:19-20?” Well, there is a straightforward interpretation that I proposed here on Evangelical Focus a few weeks ago, namely, that Jesus preached in His Spirit through Noah to the disobedient flood generation. Those who refused to repent, died; and are now imprisoned spirits. Jesus preached to them whilst they were alive; but now they are in hell awaiting final judgment.

The third interpretation of 1 Peter 4:6 is that of Clement of Alexandria, Augustine and Martin Luther. It teaches that the Gospel was preached to the ‘spiritually’ dead i.e. unbelievers.

There appear to be two main problems with this third perspective.

Firstly, 1 Peter 4:5 is talking about the literally dead, not the spiritually or metaphorically dead. Why would Peter change the meaning of the word “dead” in one sole verse? Surely he would have pointed out that he was modifying the term’s meaning.

Secondly, verse 6 says that the Gospel was preached in the past tense. Nevertheless, the Gospel did not stop being preached to the spiritually dead before Peter penned his epistle in the sixties of the first century. If that were so, none of us twenty-first century folk could have been saved.

This interpretation fits in perfectly with the context. Peter is talking about persecution for the faith. He attempts to encourage his fellow believers to be strong in the Lord and to fight the good fight to the end. So he does this by urging his readers to follow the example of those who have suffered for the faith, that is, those who were “judged in the flesh according to men”.

The Asia Minor Christians were suffering greatly for the faith and Peter uses the example of godly saints who had stood firm in Christ till the end. Some of them, no doubt, had been martyred for the Gospel.

The fourth position also makes good linguistic sense. Since Peter is alluding to now-dead saints; it reveals why he uses the past tense regarding their receiving of the Gospel. They heard and believed the Good News whilst they were alive.

All in all, the most satisfactory reading of 1 Peter 4:6 is that it refers to believers now dead who stood up for the Lord in the midst of the whirl of Roman persecution.

Regarding Holy Saturday, it would seem that Jesus’ body remained in the tomb whereas his soul/ spirit went directly to paradise with the Father; and not to Abraham’s Bosom.