I only lack one single thing...

As it’s already past opening hours, I make a detour into the nearest town to find a late-night store. 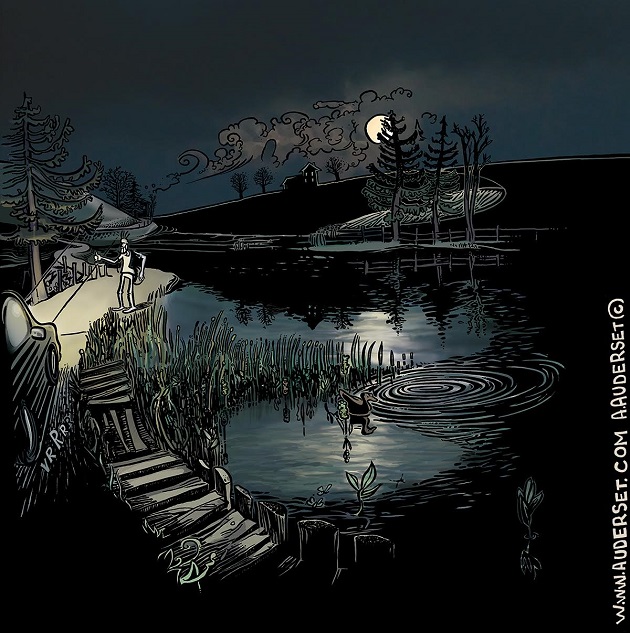 The sparkle from the past

Bringing the message of Jesus, spreading hope through laughter, that was the reward that showered good humour as much on my little troupe as on our audiences. Neither this line of business nor my comic books were bringing in much money and this situation weighed heavily on me! I had to find some way of supporting my family financially from day to day and, to be honest, this precariousness consumed a little too much room in my thoughts and prayers.

Nowadays, however, when I open the trove of memories from that time, all I can see is one magnificent treasure, more sparkly than a thousand precious pearls: that of the wonderstruck looks of the young members of our audience!

Just before I drop off

After driving a good part of the night, I take the members of my small team to their homes. Their drowsiness has come about quite naturally with the continuous, monotonous purring of the engine and, as I let them out, you would think I was unloading a group of drunken vagrants! I must be pretty tired myself too, as I don’t even have the energy to tease them as I watch them stagger towards their homes…

As for me, I still have to return the keys of our rental bus and complete the final formalities… Then, using my last ounce of energy, I take the steering wheel of my old car, heading for home. Two of my children (still young at the time), lying in the back, have already gone ahead of me to the land of dreams and I am just waiting for one thing: being able to join them!

My eyes are tired of carrying the bags beneath them, but awake enough to make out, in the night, a black hitch-hiker at the side of the road!... Just as well he was smiling, otherwise I wouldn’t have seen him!

As is my habit, I stop. I have lots of African buddies in the area and I love chatting with them!

Additionally, if it can stop me falling asleep at the wheel, I won’t say no...

Scarcely has he sat down than, before even greeting me, he bends over double and rummages in the plastic carrier bag he has placed at his feet. With a well-rehearsed flourish, he pulls out a sheet of paper which he holds in front of my nose and proceeds with:

‘I am hungry, I have a wife and three children and we haven’t eaten for a day now...’

His paper looks ‘official’: it shows that he is a refugee and that he will not have any money for the whole of this month of August. I feel caught in an unpleasant atmosphere which I know only too well: one in which my naïve tendency to believe everything I am told is abused by a con man posing as a poor person. But I refuse to allow such a thought to close my heart to compassion: you never know, this man may really be in need!?

‘I don’t know you and I’ve hardly any money on me... but alright, I’ll stop at the nearest shop, is that OK with you?’

As it’s already past opening hours, I make a detour into the nearest town to find a late-night store. Once I’ve parked, I ask my daughter to stay with her little brother who is sleeping. It upsets me to leave my drowsy little sweetheart facing this situation and to walk away from them and from the car like that. I walk into this deserted (but still open) petrol station in the company of my mystery beggar...

The hitchhiker saunters miserably behind me, stopping at each section. I call him over, so as not to lose him:

Do you have a stomach different from mine?... Oh well, let’s look for something else.

After putting together a few things that would go with couscous and make a balanced meal, I look for my buddy who is transfixed and drooling at the meat section. Pointing out the cutlets to me, he lets out:

‘But if I buy you that meat, I won’t have any money left to buy you anything else at all. With the couscous you could make several meals for your family. With your cutlets, on the other hand, you won’t even have enough for one single meal! Even I can ill afford a luxury like that...’

None of my explanations have any effect on my disappointed speaking companion. I reap nothing but criticism and incomprehension. He sulks and explains to me that:

‘Anyway, I’ll only eat couscous from a big brand shop!’

After dropping him off, I set off again to my home, miffed. I experience the bitter taste of a cocktail with the flavours of dupe, annoyance and sadness. But rest assured, it’s not that I’m racist... ’cause I’m well aware that this kind of bird is found in all shades of colour, including white...

The following day, as is my habit, before going to work I go on my little morning walk. And, killing two birds with one stone: I take the baby for a walk. But neither (s)he, nor the wonderful panorama of green meadows, brings me out of my thoughts, still stewing in the grimness of that misadventure. Without warning, a thought, in which I believe I recognise the Lord, presents itself:

Whop! Hmm, that’s so true! So I make the decision to review my priorities and my attitude towards Him… Actually, it dawns on me that my daily causes for complaint are actually gifts for which I have shown no gratitude! And when I make a deliberate decision to thank Him for them, I become aware of the fact that there are so many of them that there is only one single thing I lack: time...

The time necessary to thank Him for all His kindnesses!

Published in: Evangelical Focus - Appointment with God - I only lack one single thing...