Here is where it gets interesting: they marry. And have kids. And Tim’s father dies. 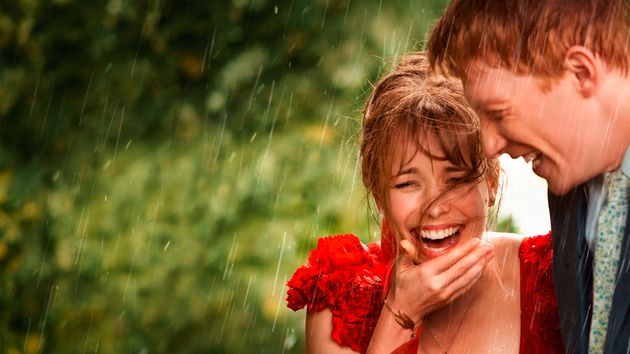 The movie About Time features a plot that surprised and touched me deeply, both for what it communicated and for what it didn’t.

The blissful, romantic laughing-in-the-rain movie poster had made me expect a romantic comedy – the boy and girl who despise each other only to then fall madly in love and conclude the movie with an epic kiss. Yet, alas, a romantic comedy it was not, though it was romantic and a comedy.

The movie tells the story of Tim Lake (played by Domhnall Gleeson) who, at his 21st birthday, hears from his father than the men in the family have the ability to travel back in time. A welcome surprise,

Tim uses the ability to help him achieve his chief goal in life: find a girlfriend. You know, introduce yourself to the girl a number of times untill you finally get it right and she likes you (a possibility that could help others of us if you ever read this, time travelers of the future). Eventually he finds a nice gal and they fall in love, still early in the movie.

But here is where it gets interesting: then they marry. And have kids. And decide to have more kids. And Tim’s father dies. And they help his sister ditch her bad boyfriend. And some more things happen. And this is what I really liked.

The extension of the plot beyond the ecstatic falling in love of romantic comedies surprised me. The movie portrays also ordinary moments of life, love found but also sustained, and not just romantic love but also love for the family and a beautiful father-son relationship.

It is called About Time (at least in my take) because it is a narrative reflection on the nature of time, and time by its very nature always flows beyond rare special moments. It includes glorious January Mondays like today, for instance.

The time-traveling reveals itself in the movie as a charming twist to frame an appreciation of life, and quite a delightful one.

I love romantic comedies, I confess. Sometimes after a bleak week it is just what you need. Let the sun shine and the world look more colorful.

But their exaltation of the extraordinary over the mundane, of love found over love continued, of the moment over years and decades often leaves us with the impression that happiness is only about a few fortunate peaks in life, and that once you’ve met your gal, it’s only downhill from there. Of course it is not.

So, if you have some spare time this Monday evening, About Time would be a good suggestion to watch in pajamas. Under the blanket. Hoping the kids don’t wake up during the movie. With friends, with mom and dad, or with your soul mate almost falling asleep after a glorious January Monday.