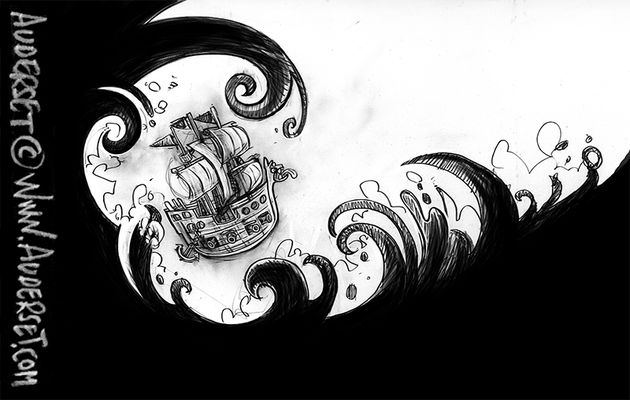 A stand-in captain is woken up.

My sleep is swaying, like a boat caught in the pull of the receding waves.

I am rudely awoken by an anxiety, who has a really worried look on her face:

There’s someone who doesn’t hold back on the abuse of punctuality. I didn’t look closely, but, in my opinion, she’s the same one as yesterday and the day before yesterday… (unless there are several of them, working in shifts).

Persistently, with muffled cries, she whispers her concerns to me in my head:

‘Captain! Captain! The boat of your life’s about to sink!’ (this obsession with reminding me that I’m a captain!)

I can see that, inescapably, a great wave of deep despair is poised to break over me.

Blistering barnacles! I’ve got to get myself out of here!

But as I turn over on my bed to escape into the oblivion of night, scuttled! It’s too late, the storm has already reduced to nothing the fragile sanctuary that is my sleep. Pickled herrings! I must get away from the breaker before it falls on me.

Next stop: a film, a project on hold or a comic book to take my mind off things...

As I search for a distraction to cling on to, my eyes settle on the Bible carefully placed on my bed next to me. Its pages are fully extended, like the wings of a dove ready to fly away.

Actually, yesterday (technically it is more today), while reading it, I had adeptly and delightfully slipped into the land of dreams.

The Bible had then quite naturally landed by my side (like the parrot on a captain’s shoulder!), as if to have a better lookout for my return. Instinctively, I cling on to the promises that I find in it.

Bottle in the sea

Thundering typhoons! I’m drowning. From deep down in my soul, I send up a distress signal to Jesus for Him to send me help.

With all the bottles in the sea that I’ve already sent to Him, He’s going to end up thinking that it’s an incitement to Him to set up His own wine cellar!

Like a tamer of wild animals, I command the storm to calm down... The affirmations of the Holy Book crack like a whip. I sense that the wind is about to turn in my favour, despite my victim status! Battle stations! All hands on deck! I get up, I must dump some ballast.

The welcome of the great outdoors

I leave the house and enter this ocean of vegetation which is the forest: she’s the calm water I need to seek a one-on-one encounter with my Creator...

Here, I can talk freely out loud, only disturbing the One I am speaking to; (oops !... not entirely), I must have also woken up the forest.

Majestic, she disentangles herself from the night. She stretches out her branches lazily, casting off effortlessly twilight’s final remnants of darkness and worry.

The forest seems to recognise me and watch me with gratitude; her still bashful awakening, full of all the hopes of the start of a day, is to me like a welcoming smile (maybe she mistook me for the day... ?)

The tumult of my confused thoughts and prayers, busy dashing all over the place in my head (it’s a disaster zone in there!), comes to a sudden halt... the response, like a bright light, up till then blurred by the waves, becomes clearer:

You must choose to face up to your challenges, rather than put up with them.

There was then inside me something like a second awakening, dissipating little by little the final waves of my fears. Yes, the Everlasting God is still today the sure refuge that we need! (look no further...)

I returned the next few days to ‘see’ God in the forest and He revealed to me the names of my various night-time agitators.

They are: Destabilisation, Discouragement, Scorn, etc. (“#[|{}!!, there are lots of them actually!)

Now that I’ve identified them, if they show up, I have decided to put them in their place. But that must have become known in high places because these last few nights I have been sleeping a little better...

We forget, but long before he was king, David used to do in lions and bears. He was a shepherd caring for his sheep and determined to fight for them whatever the cost, going as far as snatching them from the jaws of the enemy.

He didn’t know then but his daily troubles were just training in preparation for his destiny... Destroying Goliath, saving his people (his new sheep!)

We too have been put in charge of a crew! (of sheep, children, parents, family, neighbours, people we come across by ‘chance’, pals from church or not, etc. ...) The larger, or more valuable, or more strategic the flock entrusted to your care, the more the spiritual filibusters will go at you in order to seize them (I ought perhaps to have thought twice before asking the Lord of hosts if I could conquer the world... !)

Have you got on board with God?

Well, there’s no doubt, the storms of our lives are not for nothing but strategic. They are training sessions (sometimes lessons...) and their intensity is proportionate to the greatness of the mission destined for you.

(And if you have a ton of sh...(hum) problems, it’s because you’re not being trained to be an ordinary soldier, but maybe to be a captain.)

Whatever you’re living through, chin up! Raise the standard of hope and down with gloominess! Ready about, lads and ladies (that’s the feminine of lad, isn’t it?), it’s time to go! We’ll have time to rest when we reach the port of New Jerusalem!