The lack of food would remind the Israelites of the fact that when they were in the desert, and were hungry, they were fed by God. However, now, having turned their backs on God, they would suffer hunger again. 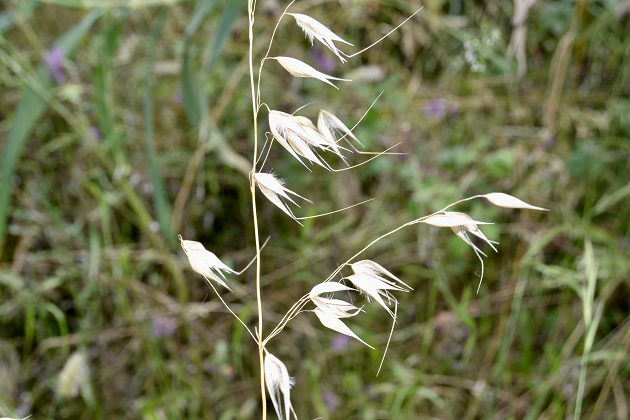 "Take wheat and barley, beans and lentils, millet and spelt; put them in a storage jar and use them to make bread for yourself. You are to eat it during the 390 days you lie on your side.” (Ez. 4:9)

The Hebrew term kussémeth, which is used for spelt in this verse and also in the book of Isaiah (28:25), comes from a root which means to clip or cut back. While the translators of these texts hesitated between three possible types of cereal: oats, barley and spelt, most of them believe that it must actually be spelt, with its seemingly bristly or shortened ears. For this reason, now many more contemporary translations prefer the term spelt rather than oats.

Nevertheless, oats Avena sativa belong to the family of the Poáceas and have been used for millennia as food for livestock. Although they were grown in huge quantities across the central Asian plains, they were never considered to have the same nutritional quality as wheat or barley. We know now that during the Bronze Age they were grown in central Europe. Oat flakes have also been found in archaeological digs in Egypt.

Oats are an annual plant which can reach a height of just over one metre, supposing that the soil is rich in nutrients. It has flat leaves and its flowers are grouped in pairs, together with pairs of small hanging ears. The lower flower usually has an awn that is twice as long as the flower itself. It flowers at the end of the spring or beginning of summer.

The oat grain has a complex chemical composition. It is made up of about 12% or 13% water, 60% starch, between 2% and 5% sugar, 5% lipids, cellulose, mineral salts such as iron, zinc and magnesium, flavones, phytoesterols, as well as A, B1, B2, PP, E and D. Hence its nutritional value for pets, livestock and humans. Oats have been shown to be beneficial in reducing cholesterol. [1] There are three known types of oats distributed throughout the world. There are less resistant to freezing temperatures and drought than other cereals such as wheat or barley.

The text in chapter four of the book of Ezekiel, quoted at the top of this article, refers to one of the symbols which God shows the prophet relating to the siege that Jerusalem would be subjected to. In the first place, the Lord orders Ezekiel to make a model of the holy city on a clay tablet like those used by the Babylonians to write on, in order to show people what the siege would be like. Then God speaks to him about the length of time that the punishment against Israel would last (Ezekiel 4:4-8). Then he refers to some of the circumstances that this punishment would involve, such as the lack of food and water that they would suffer for the duration of the siege. Under such circumstances, they would have to ration the reserves of food, and mix good cereals will inferior cereals, contrary to what the law commanded. The Hebrews would find themselves in a dreadful situation, about to die of hunger and thirst. We must bear in mind that, this was indeed precisely what happened when Nebuchadnezzar laid siege to the city, as we can read in Jeremiah 37:21. What was the lesson in all this?

The lack of food would remind the Israelites of the fact that when they were in the desert, and were hungry, they were fed by God. However, now, having turned their backs on God, they would suffer hunger again. The sin of turning their backs on their Creator, and turning towards the surrounding paganism, would have very serious consequences. That was the case then, and it is still the case now.