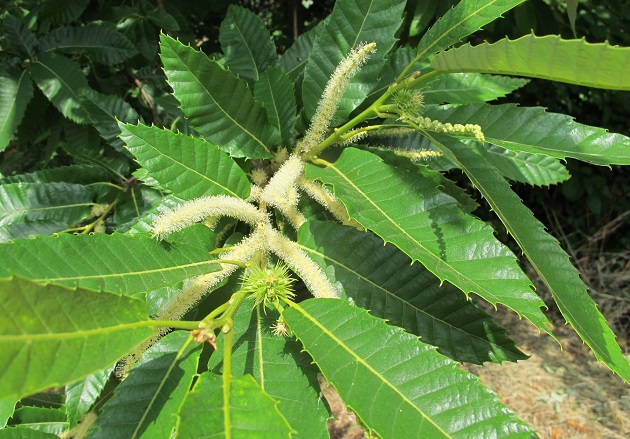 Chestnut trees only appear twice in the Bible (in the Reina Valera Spanish translation, and in all the versions that derive from it).

The first reference has to do with the strategy used by Jacob against Laban in order to acquire all the streaked or spotted sheep and goats (Genesis 30:37), while the second corresponds to the allegory of the cedar and the cyprus trees referred to at the top of this article.

However, later studies have shown that the Hebrew term armón, which occurs in texts like these, does not refer to the chestnut tree but to the ‘plane tree’ (Platinus orientalis), which is very common in the Holy Land.

Needless to say, this is not the banana tree from the Canary islands, but the Oriental plane tree, a species which looks a bit like the Maple, which are often planted along streets and roads in Europe.

The chestnut tree does not flower in the climate of Israel or in Mesopotamia as their area of distribution spans only from Europe to northern Turkey, while the oriental plane tree from Europe to the Pyrenees, stretching across the whole region of the Fertile Crescent.

This Hebrew word used for the plane tree, amón, is translated into the Septuagint Greek version as plane trees and subsequently into the Latin vulgate as platanus

This feature is reflected in the etymology of the Hebrew word, which connects with the Aramaic term aram, which means “to be stripped naked”, and also the Arabic term, aram, “to strip off the outer layer”.

Of course, these properties match better those of the oriental plane tree than the European chestnut tree.

However, given that it is the chestnut tree that appears in the 1960 Reina-Valera Spanish translation, and all those that derive from it, I will mention some of the main characteristic features of this species of flora.

The chestnut tree (Castanea sativa) is a tree which can easily reach a height of 30 metres and belong to the great Fagaceae family, with more than 400 different species scattered throughout the world.

It is famous for its fruit, chestnuts, which are edible and, during periods of food shortage, provided survival food for human populations. It originated in southern Europe and northern Asia Minor, although it was subsequently introduced in many countries in the world. The bark is smooth, brownish or greyish in the case of younger specimens and darker in that of older ones.

It cracks vertically, but the bark never peels off. The leaves are long and narrow, measuring 8 by 22 centimetres at the most, with a serrated edge with sharp teeth.

The masculine flowers are arranged on white, 20-centimetre long filaments, while the feminine ones are covered with silky hairs. The chestnuts are covered with long ramified thorns, so they have to be picked with the aid of gloves, or very carefully.

As far as the tree is concerned, which most Bible translators conclude was the oriental plane tree (Platanus orientalis) that was being referred to, it should be pointed out that the bark is noticeably different from the chestnut tree, in that as it peels it presents different colours.

It is possible to make an analogy between the bark of the trees and people’s skin. The former enables botanists to differentiate between different tree species, while the latter, sadly, is used to justify racism and xenophobia.

However, in no way can such prejudices be justified. Neither science, nor ethics nor Christian values provide any support at all for any kind of racial discrimination, least of all racism.

Now we know that there are many human ethnic groups which can be classified according to physical appearance, but there are no different races. The proportion of DNA genes in question is so insignificant that a racial classification of human beings is impossible.

Science has confirmed that all human beings belong to the same human race, just as Luke the evangelist stated more than two millennia ago when he said: “And he made of one blood all nations of men to dwell on all the face of the earth” (Acts 17:26)

So, every shade of human skin has the same radiance in the eyes of the Creator. And, of course, every skin tone can shine just as Moses’ face did after his conversation with God. (Ex. 34:29).