There are many who believe that nature created itself. However, since the days of Job until the present day, millions have believed this to be impossible. 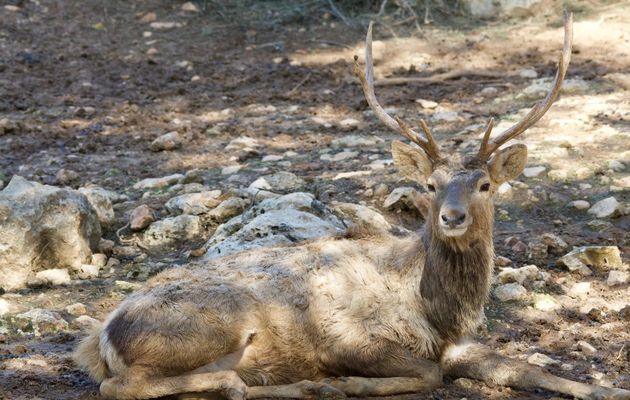 An example of a male Bactrian deer (Cervus elaphus bactrianus), resting in the shade in Jerusalem zoo. / Antonio Cruz.

Then will the lame leap like a deer, and the mute tongue shout for joy. Water will gush forth in the wilderness and streams in the desert. (Is. 35:6)

Another term that is used is ayyéleth, Proverbs 5:19; Jeremiah 14:5; Psalm 22 title). In the Greek Septuagint it is translated as comoélaphos,  and the Latin Vulgate term is cervus.

There are no longer any wild deer in Bible lands. The subspecies, Cervus elaphus bactrianus, which abounded in Bible times, especially to the north of Mount Tabor, subsequently disappeared from these regions due to hunting, the depletion of the forests and the presence of predators.

Nevertheless, there are now thousands of examples of this subspecies in Turkistan and northern Afghanistan, but the Bactrian deer have disappeared from Israel. Now they are being bred in captivity with a view to being reintroduced into Bible lands.

In the Bible it is also admired for its light-footedness and agility (Song of Solomon 2:9; Isaiah 35:6); for its surefootedness (Habakkuk 3:19); for its affection (Proverbs 5:19), and the fact that it protects its young and hides them from harm (Job 39:1).

Subsequently, during the first centuries after Christ, Christians associated the symbol of the deer with candidates for baptism, who desired saving grace. 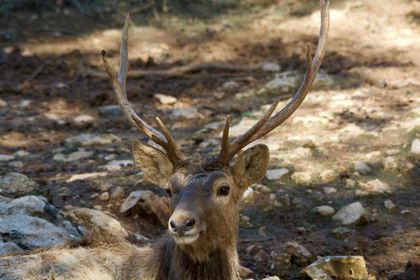 In the same way, the two deer looking at the cross which feature on the façade of the Catholic basilica of Gethsemane, in Jerusalem, represent believers receiving grace thanks to the death of Jesus Christ.

The Bactrian deer is one of 27 documented subspecies of common deer (Cervus elaphus) in the northern hemisphere. It is a large vegetarian artiodactyl which can reach a size of 250 cm in length and, in the case of the male, a weight of 200 kg.

There is a striking dissimilarity between the two sexes, in that the female is much smaller and has no antlers. Their body hair is brown, except for their gluteal folds and belly, which are white.

The young are a reddish colour, with white spots and stripes to camouflage them from predators. They have split hooves and two rudimentary lateral toes.

The large male specimens are solitary, but the females live in packs on plains, meadows, marshland or mountain regions. They normally feed on vegetation like leaves, Grass, bark, fruit and fungus.

Although they are shy and elusive, the males become aggressive and fight among themselves for the females during the mating season.

It is customary for pregnant females to separate themselves from the pack to give birth. In the peaceful high grazing grounds, their fawns are born with a hide speckled with bright spots which enable them to avoid being noticed by predators in the surrounding vegetation (Job 39:1).

The mothers will return, after feeding, to this same isolated spot, to suckle their fawns, which will not stray far from their hiding place when they are alone.

This behaviour will save the lives of many of these fawns, because if they were with the pack, being weaker and slower than the others, they would be easy pickings for their enemies. How do the hinds know how they must act to protect their young? Who taught them to behave in this way?

The book of Job highlights the wisdom of God in creation, and in sustaining his world, and raises questions such as, is the human being capable of regulating and shaping the conduct of these animals? Can Job explain the nature of such phenomena without invoking a wise and highly intelligent creator?

Nowadays there are many who believe that nature created itself without the intervention of a supernatural designer.

However, since the days of Job until the present day, millions have believed this to be impossible because from nothing, nothing comes, however much you strain the math and physics.