Certain food agencies are considering the possibility that in the future insects could become the main source of protein for humanity. The Bible envisaged this scenario thousands of years ago. 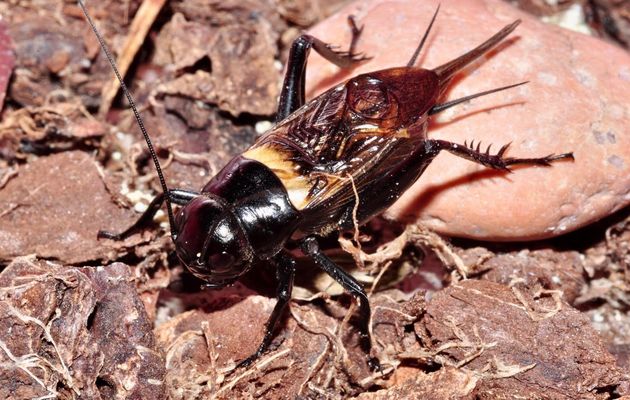 Real crickets, like this specimen of gryllus bimaculatus photographed in Israel, have a large, bulbous head, as well as strong legs with robust, spiny femurs. / Photo: Antonio Cruz

The Hebrew word jargol which appears in this quote from Leviticus 11:22 as “argol”, refers to one of the four species of winged insect that move on four legs and also have “legs” which they use to jump.

Many translations render “argol” as cricket and “hagab” as locust or grasshopper. The Spanish terms “grillos” or “grilletes” are also used in Spanish translations of the Bible to mean “fetters” or “chains”, with reference to the irons that were used to bind prisoners on account of the noise they make as they are dragged across the ground, supposedly reminiscent of the incessant clicking noises emitted by these insects.

Though more than 900 species of cricket have been identified around the world, one of the most common varieties to be found in Israel currently is the Gryllus bimaculatus. It is a species of cricket that originated in North Africa and Southeast Asia whose scientific name alludes to the yellow spots at the base of its wings which stand out against the jet black of the rest of its body. Its wings are too small to enable it to fly.

Apart from their inability to fly, crickets are also different from grasshoppers in that they have long filiform antennae. This is a feature that they have in common with green locusts. During the day they hide in the burrows that they dig for themselves in the ground with their mandibles. At night they come out of hiding to search for food. They are mainly vegetarian, but they also hunt for insects and feed on carrion and human waste. This omnivorous diet has enabled them to coexist with humans for many millennia.

Real crickets, like this specimen of gryllus bimaculatus photographed in Israel, have a large, bulbous head, as well as strong legs with robust, spiny femurs. On their front tibiae they have one or two auditory tympana. They have very long antennae, and the females, as depicted in this photograph, have an ovipositor at the tip of their body for laying eggs under the ground.

Male crickets fight to gain possession of territory and of females. Their strategy consists of trapping their opponents with their mandibles and pushing them away with all their strength. Whichever one has less strength and is pushed back in this bloodless combat will withdraw without suffering any serious injury. The winning male deposits its sperm in small capsules known as spermataphores, which are then picked up by the female.

The female lays her eggs in the summer, and buries them in the ground, by means of a long tube or ovipositor. The offspring emerge, fully developed, the following spring.

The crickets’ famous chirping noise, which they produce by rubbing their external wings together, are designed to attract females and mark out their territory acoustically against incursions from possible competitors. They can also pick up sounds like these with the auditory membranes on their hind legs. Cannibalism occurs very rarely among them, although it has been known to happen when food is very scarce; the females (sometimes measuring between 2 and 3.3 centimetres) are capable of devouring the males, which are smaller.

The text in Leviticus at the start of this article lists the insects that Jews could eat, along with those that they could not. The former include crickets, locusts and grasshoppers. The New Testament informs us that John the Baptist ate locusts and wild honey (Matthew 3:4 and Mark 1:6).

In fact the consumption of insects and arachnids is as ancient a practice as humanity itself, and it has recently begun to become fashionable again, or at any rate, it is seen as a way of mitigating the negative effects of global warming. Insects have formed part of the diet of some ethnic groups since time immemorial, as many insects constitute a food source that is rich in proteins. Certain caterpillars are between 30% and 80% protein, and also contain vitamins, minerals and fat.

Insects have been ingeniously designed to, among other purposes, convert food very efficiently. Their high reproductive rates mean that they take full advantage of the nutrients in their surrounding habitats and convert them into proteins, vitamins, lipids or carbohydrates, at a much faster rate than other, larger, animals like cows, sheep or pigs. For example, it is estimated that the productive efficiency of insects is 20 times greater than that of cows.[1] Hence certain food agencies are considering the possibility that in the future insects could become the main source of protein for humanity. The Bible envisaged this scenario thousands of years ago.