The crane knows its time 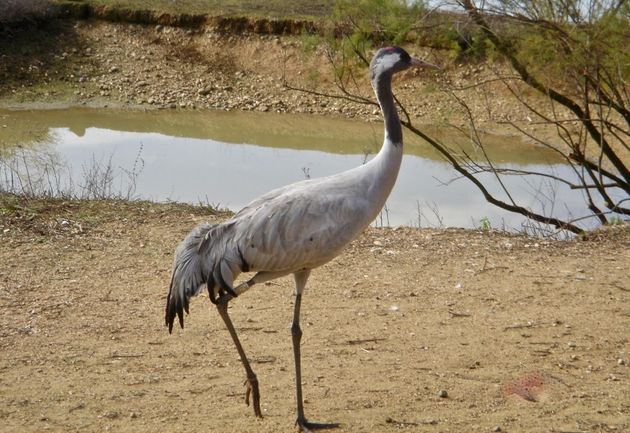 The Grus grus cranes mentioned in the Bible can still be seen on their migratory journeys in places such as the Agamon-Hula lake in the north of Israel. / Photo: Antonio Cruz

Like a swallow or a crane I cry out;

My eyes are weary with looking upward.

O Lord, I am oppressed; be my pledge of safety!

Even the stork in the heavens

and the turtledove, swallow, and crane

keep the time of their coming,

but my people know not

the rules] of the Lord

These are the only two verses in the Bible in which cranes are mentioned. The verse in Isaiah refers to the piercing sound that these birds are capable of making, while the verse in Jeremiah focuses on their extraordinary migratory habits. The terms sus or sis, translated in these verses as “crane” comes from a root word meaning “to jump” or “leap”.

In fact, the bird is famous for its dances, and its up to five-metre leaps in air when they gather in small groups, in a sort of social recognition ritual. They are not native to the Holy Land, but are migratory birds that cross the territory a couple of times a year and which can, therefore, be seen at the start of the autumn, when they are heading for Africa, and at the end of Winter, on their way to northern Europe and Asia. 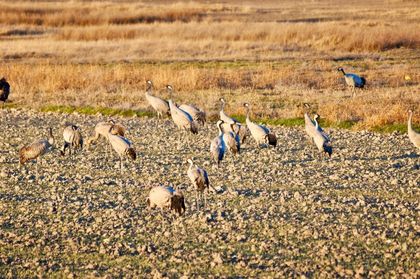 The famous English theologian and naturalist at the end of the 19th century, Henry B. Tristram, observed the presence of some two thousand cranes flying over Bible lands at that time, and stopping to rest in places like Beerseba and Acaba while migrating. [1]

Now they can still be seen in their hundreds, during migration times, on the Agamon-Hula lake, in the North of Israel and other places.

Euroasiatic cranes (Grus grus) are elegant members of the Gruidae family which have long legs and beaks. Their plumage is grey, and their back is dark brownish, or darker, while their chest and winks are somewhat paler. Their general appearance is reminiscent of storks and herons. The largest of them can reach a height of a metre and a half, and their wing-span two and a half metres. There are 14 different species scattered throughout the planet. The cranes that frequent Israel have a distinctive red, featherless mark on their head, and their head and neck is black and white. They are birds with a long life-span of up to 50 years.

One of their most curious features is their piercing, lament-like cry, which in the ears of the prophet Isaiah must have sounded like a cry of complaint or displeasure on the part of the birds. This unique sound is caused by the internal anatomy of their trachea, which can be as long as a metre and a half, and is coiled around the breastbone, resulting in it being able to produce a powerful trombone-like sound that can be heard from a distance of more than two kilometres.

The practice of hunting for sport for many years, or on account of the supposed damage caused by cranes to the countryside resulted in a considerable decline in the numbers of these majestic birds. Nevertheless, they are now a protected species throughout the world. 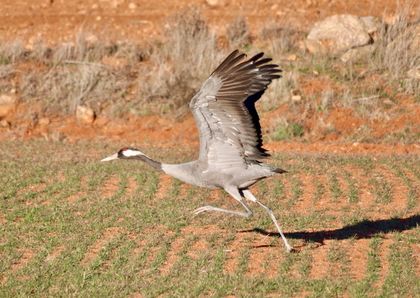 They are excellent flyers, and normally have to cover quite a distance on the ground before being able to take off. Once in the air, the colonies of cranes are a beautiful sight, as they organise themselves into stair-like patterns or V-shapes, in which the lead bird is replaced from time to time to avoid the tiredness that might result from wind-resistance. They advance by means of slow wing-beats, with their necks continuously stretched forwards. They can fly at enormous heights, occasionally up to 4000 metres above sea-level. [2]

Cranes are omnivorous, feed mainly on vegetation, leaves, roots, stems, seeds and fruit, but they can also eat small animals such as insects, spiders, centipedes, crabs, worms, snails, amphibious organisms, small fish and rodents. Although they can damage local crops, they usually only eat the seeds that have fallen to the ground and have not taken root, which means that they are usually beneficial for agriculture as they eat the animals and insects that tend to attack crops.

Cranes in northeast Asia and northern Europe have two possible migration routes to Africa which do not involve flying over the Mediterranean: one is Israel and the Arabian Peninsula, while the other is the Iberian Peninsula. In autumn some 150,000 cranes from Scandinavia and the Baltic states cross northern Spain. They stop for a while at the Gallocanta lake (between Zaragoza and Teruel) and continue towards the southeast, some of them staying in Extremadura and Andalusia, while others continue as far as Africa, at the mouth of the Massa river, on the Atlantic coast of Morocco.

The verse from Isaiah 38 at the start of this article is a poem which is reminiscent of David’s Psalms. It refers to the terrible emotional affliction of King Hezekiah when he was struck by a fatal illness. In some ways it recalls the suffering of Job as well. The text raises questions about the impotence of the human being in the face of what God has predetermined for them. After giving full voice to pain, and crying out in anguish, as the crane seems to do, all we can do is hope in the Lord.

The second part of the chapter refers to the deeply satisfying experience of knowing that God has heard Hezekiah’s prayers and saved him from death. King Hezekiah was healed and his life extended by fifteen years. The author acknowledges that life is precarious, that we should live life intensely and rejoice in the time that is given to us, but above all he stresses an important lesson: during our human existence on this earth we must prepare for what lies beyond it. Like migrating cranes, we must be ready to take our leave when the Lord calls us into his presence.

Published in: Evangelical Focus - Zoe - The crane knows its time