Originating in Persia, this plant can still also be found growing in the region between Syria and India. It is a large herbaceous perennial bush. 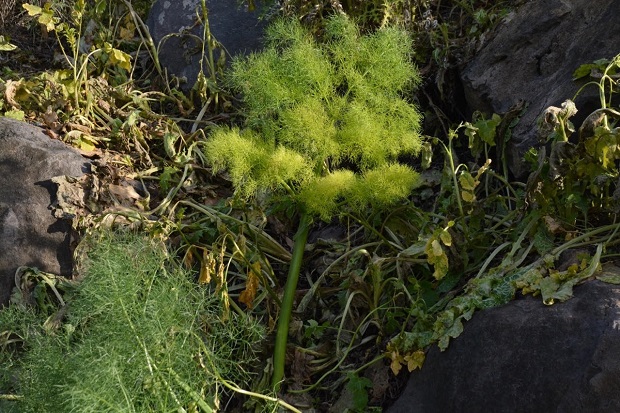 Commun galbanum (Ferula communis) is the most abundant of the Ferula species, and can be found throughout the territory of Israel. I took this photograph in the ruins of Bethsaida, to the north east of the Sea of Galilee.

Then the Lord said to Moses, ‘Take fragrant spices – gum resin, onycha and galbanum – and pure frankincense, all in equal amounts, …

Galbanum is an unpleasant smelling, sticky, resinous gum which is extracted for medicinal purposes from the root of a plant called Ferula gummosa, belonging to the Apiaciae family.

Originating in Persia, this plant can still also be found growing in the region between Syria and India. It is a large herbaceous perennial bush: it can reach a height of four metres and its step ranges from 5 to 8 centimetres in diameter. It has serrated leaves with thread-like tips, large yellowish umbel flowers and lentil-like seeds. The Ferula genus includes more than 200 different species which originated in the Mediterranean Basin and central Asia. They grow primarily in dry regions.

In the Bible galbanum is only mentioned once (Exodus 30 v 34), with reference to the elaboration of the incense to be used in the tabernacle. That said, in Palestine there are several other species belonging to the Ferula genus that produce similar resins, such as Ferula sinaica, which grows on the southern bank of the Dead Sea; F. biverticillata (Mount Carmel); F. communis (throughout Israel); F. daninii (near the border with Egypt); F. hermonis (only on Mount Hermon); F. neguevensis (The Negev) and F. orientalis (Samaria, between the river Jordan and the Mediterranean).[1] All these plants exude a milky liquid with a range of different properties.

In the different species of the Ferula genus, new chemical compounds have been found with a range of hitherto unknown essences and aromas.[2] The milky sap extracted from the roots, or the lower part of the stem, hardens when it makes contact with the air and forms galbanum, which was one of the main ingredients used by the Hebrews in their religious ceremonies.

If galbanum is burnt on its own, it gives off a repellent smell, but when other aromatic substances are added to it, it enhances the fragrance of these substances and emits a pleasant and lasting aroma. Now the essential oil obtained from galbanum is recommended as a means of combatting mental tiredness and stress. It is also effective in treating muscular pain, arthritis, muscle contractions and rheumatism. In addition, it helps wounds to heal and inhibits the formation of wrinkles in the skin.

The great theologian and philosopher Augustine of Hippo wrote the following: “David lived at a time when animals were still sacrificed to God, but in his prophetic vision he was given a glimpse of the future. Do we not find ourselves identifying with his words? The ancient sacrifices were an announcement and a foreshadowing of a single, saving and redeeming sacrifice. And what about now? Have we been left without a sacrifice to offer? Is there nothing for us to offer Him? Are we to come into his presence with empty hands? (…) No, what we are to offer is within our reach. We do not need to exert ourselves in finding and burning incense. It is enough for us to say: “I will offer a sacrifice of praise” (Psalm 56:12). We do not need to travel far in search of an animal to kill, for  within us we already have what we are called upon to offer: “My sacrifice, O God, is a broken spirit; a broken and contrite heart you, God, will not despise”. He absolutely despises the offerings of bulls, rams and goats, because the time for such offerings has passed; they were offered when they had to be, when they served to prefigure a reality to come in the future, when they were a promise; but once that which was promised had come, such promises no longer make any sense. God Will never despise a humbled and a contrite heart, because, being almighty God, he acts in the opposite way to the way men act: If you exalt yourself, he will move away from you; when you humble yourself, he comes close”.[3]