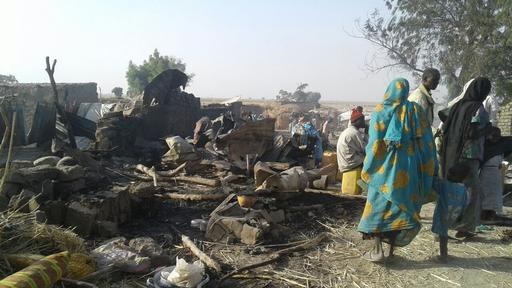 Image of the camp in Rann after the attack. / MSF

At least 52 peoole were killed in Rann (State of Borno) after a fighter jet of the government attacked a refugee camp.

The operation was an accidental airstrike, the pilots thought they were attacking an insurgency camp.

The Nigerian Air Force Director of Communications Ayodele Famuyiwa, said: “We are saddened by today’s accidental air strike (…) in which innocent lives were lost. While available information is still sketchy, the loss occasioned by this unfortunate incident is deeply regretted. We commiserate with the affected families and would update the public as soon as detailed facts emerge from the investigation.”

A CAMP FOR INTERNALLY DISPLACED PEOPLE

At the camp in Rann, aid workers distribute food to internally displaced people. About 25,000 people are staying there at the moment, many of them Christians who have fled radical Islamists, sources said.

Doctors Without Frontiers said in a statement: “Our teams have seen 120 wounded and 50 dead following the bombing.” Six members of the organisation have died.

Staff of Red Cross working on the ground reported that 13 of their members had been killed and several others wounded.

Officials said the Nigerian Air Force had been given coordinates of Boko Haram terrorists in the Kala-Balge area.