Pakistan: Girl rescued from police officer accused of forcibly converting her to Islam

The man and his wife were selling girls for over 10 years. 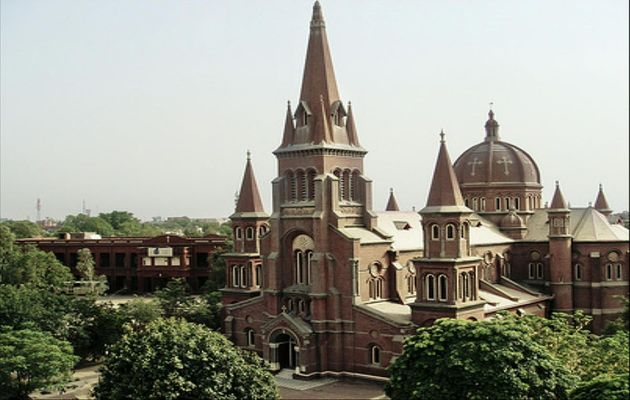 A Catholic church in Lahore.

A 14-year-old Catholic girl in Pakistan, taken from her family in December and forcibly converted to Islam, was rescued on Wednesday (April 26), her lawyer said.

Attorney Tahir Bashir said police officer Munir Ahmed on Dec. 6 illegally detained Sumbal Arif of Hafizabad District, Punjab Province and coerced her into converting to Islam while forcing her to live with him, despite attempts by her indigent family to recover her, Morning Star News informed.

Bashir said he filed for the recovery of the girl in Lahore High Court, and a court bailiff rescued her from the policeman’s home on April 26 and presented her in court the next day.

FORCED TO CONVERT TO ISLAM

“The court of Justice Malik Shahzad Ahmed has also ordered police to register a case against ASI Munir for keeping the Christian minor girl in illegal detention and forcing her to convert to Islam”, he said.

The suspect’s counsel claimed in court that Sumbal had “embraced” Islam, and that ASI Ahmed’s family was looking after her, Bashir said.

“But when Justice Shahzad asked Sumbal about the counsel’s claim, she told the judge that she was forced to convert and was being held hostage by the police official. She said she wanted to go with her family and not the police official”, he pointed out.

The judge then ordered a First Information Report (FIR) be filed against Ahmed and allowed Sumbal to go with her family, he said.

Ahmed has not been arrested. The court ordered Gujranwala Regional Police to launch an investigation into accusations against him of enticing Christian girls and forcing them to convert to Islam. Police are to submit conclusions in a report within 10 days.

Sumbal’s mother, whose husband died in 2013, said the family lives in a small rented house in the Mohalla Hassan Town area in Hafizabad, one of the two Christian families in a predominantly Muslim neighborhood.

THE POLICE FAMILY WAS INVOLVED

The accused policeman, Ahmed, lives in the neighbourhood, and his sister-in-law, Mariam Bibi, used to visit at their house often, Arif said.

“On Dec. 6, my daughter Sumbal had a quarrel with her sister-in-law Shazia in Mariam’s presence”, Arif said. “Mariam took advantage of the situation and enticed Sumbal to go with her to the ASI’s house.”

Mariam Bibi is a Muslim who is involved in the forced conversions and sale of girls, according to Sumbal’s relatives.Arif said that when she went to the police official’s house to get her daughter, she was not allowed to enter.

“Munir Ahmed and his wife Muqadas not only refused to return Sumbal but also insulted me”, she said, adding that no one in the neighborhood came to her aid as she vehemently protested.

One of her sons, a 27-year-old sweeper at a government office, provides the only source of income for the family, she said.

“One day, when Munir was not home, I succeeded in bringing Sumbal back to my house, but as soon as the ASI returned, he came to our house and forcibly took her away with him, claiming that she was a Muslim now and cannot live with a Christian family”, she said.

“He also beat up my young sons when they tried to stop him from taking away Sumbal.” Arif said she filed a complaint against the policeman at the same police station where he works.

“Our local parish priest, Father Mushtaq Pyara, asked the in-charge of the police station to settle the matter amicably, after which the ASI was told to present Sumbal to record her statement”, she said.

“It was quite clear that the ASI had threatened the girl before bringing her to the police station, because she was too scared to speak anything.”

Arif added that Ahmed then claimed that Sumbal’s Islamic name was Fatima Noor and wanted to continue living with the Muslim family to practice her new religion.

Sumbal had told her that she was forced to practice Islam during her illegal confinement. “The accused used to force her to do household work and had restricted her from leaving the house”, she said.

Sumbal could not escape, as Ahmed had told her that when someone becomes a Muslim they cannot revert back to their old faith and go back to their family, Arif said.

“They told her that apostates are liable to be killed, and my poor daughter had started believing that she would not be able to return to us as she would be guilty of apostasy,” she said.

Ahmed and his lawyer were unavailable for comment in spite of repeated attempts by Morning Star News to contact them.

Arif said Ahmed and his wife have a history of enticing young girls and selling them off to Muslim men after changing their religion.

The attorney said that the court had ordered an investigation against Ahmed on grounds that Sumbal had been recovered from his house.Further action, such as registration of a case, would be taken after the submission of the investigation report, he said.

“It was during her detention there that Sumbal came to know that the police official and his wife were in the business of selling girls for over 10 years.”

The Punjab Criminal Law (Protection of Minorities) Bill, 2016, pending with the Punjab Assembly, proposes that no one below 18 years old shall be deemed to have changed their religion. A law adopted by the Sindh Assembly in November applies the same conditions for religious conversions.

Prime Minister Nawaz Sharif, addressing a gathering of the Hindu community in Karachi in March, warned against forced conversions and destruction of non-Muslim places of worship, describing such acts as a “crime in Islam.”

In his message to minorities, Sharif stated that “No one can force others to adopt a certain religion.”

“Pakistan didn’t come into existence to be against any religion. It is wrong to consider any religion inferior”, the prime minister said.

“I want to see a Pakistan where there are equal opportunities for every person of any religion to progress and make a good life for himself and his family. And there is peace and protection for everyone”, he added.