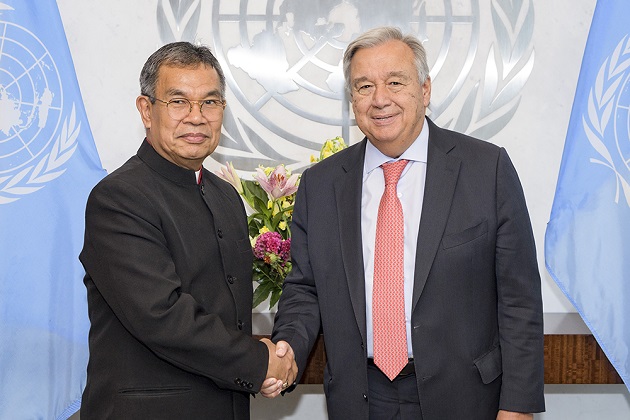 Tendero and a delegation of the global evangelical body were welcomed at Guterres’ office in New York (USA).

According to a press release of the WEA, “Mr. Guterres expressed his appreciation for WEA, which he personally became more aware of when he previously served as the UN High Commissioner for Refugees from 2005 to 2015 in Geneva, Switzerland”.

“The WEA’s Geneva Liaison Office that works with regional and national Evangelical Alliances is known there for providing detailed grass root-inspired reports as part of the Universal Period Review process where each UN member state’s human rights record is reviewed every few years”.

Guterres also “acknowledged the role that evangelicals played in serving the needs of refugees coming to Europe”.

The Secretary General of the WEA said the leadership of the UN head since 2017 “has often provided the world with a careful and measured response [in issues of war, hostility among states], bringing to the many players a thoughtful plan to override our human propensity to violence”.

Tendero told of his own experience in the Philippines and expressed to Guterres that evangelical Christians “affirm our commitment to inter-faith dialogue and peace building”. “After all”, he said, “Jesus provides not only the model of peace, but by his very presence and power, induces in the hearts of us an inclination to follow him and not our own self-interest”.

The WEA representative also shared with Guterres about the ongoing concern for Christians whose rights are being violated, underlining WEA’s Religious Liberty Commission response to such issues.

Tendero also spoke about the work of WEA’s Human Trafficking Task Force and the collaboration with both Christian and civil society groups, “especially in countries where young people are trapped by modern forms of slavery, such as prostitution”.

The Jesus Global Youth Day, which will be celebrated in August 2019 in Manila and is scheduled to coincide with the UN’s International Youth Day, was also presented. The WEA Secretary General said that those gathered will be mobilized to adopt certain agenda items of the UN’s Sustainable Development Goals (SDGs), such as poverty, inequality, environmental degradation.

Finally, Tendero told the UN head that evangelical Christians are committed to prayer and “to join hands in responding to the specific needs prevalent in their own neighborhoods”.

Published in: Evangelical Focus - world - UN head acknowledges the role of European evangelicals in serving the needs of refugees