As church worships, police in Algeria arrive to seal building

Congregation initially refuses to leave. “The assembly finally yielded and agreed to leave the premises, but with much pain”, Pastor Takilt said. 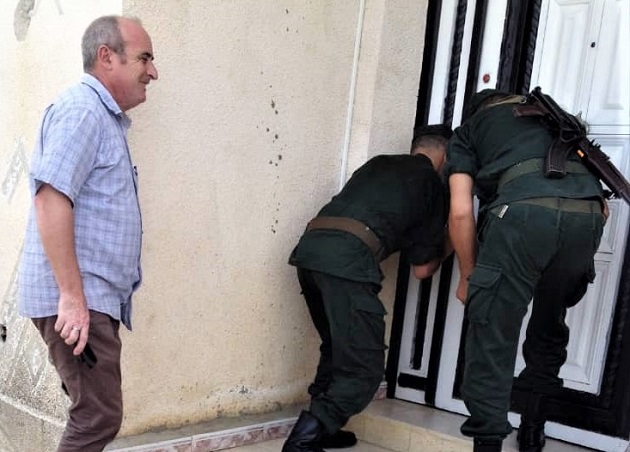 Interrupting a worship service, police on Tuesday (Aug. 6) sealed a church building in north-central Algeria, less than three months after locking shut another site in the same area.

“I am deeply saddened by so much injustice – it breaks my heart,” pastor Messaoud Takilt told Morning Star News. “This is not surprising since other Christian places of worship have been closed and sealed as was the case today. But anyway, we will continue to celebrate our services outside while the Lord gives us grace for a final solution.”

Gendarmes from Makouda had shown up on Saturday (Aug. 3) during the church’s service in Lekhmis village, Boudjima, about 20 kilometers (12 miles) northeast of Tizi-Ouzou in Kabylie Region. They left Pastor Takilt a three-day ultimatum to remove all contents from the building and a summons to report to the brigade.

On Tuesday (Aug. 6), the gendarmes returned around noon to seal the building as the church worshipped, Pastor Takilt said. They summoned him outside, where he told them the congregation did not want to leave the building. The gendarmes showed him their orders and urged him to cooperate.

“We are here to execute an order, and we will execute whatever it is,” the officer replied, according to Pastor Takilt. He added that the officer took him aside and said, “Messaoud, understand that if there is opposition, it is you, as the one responsible, who will have problems. Please note that the file and order is addressed to your name.”

The pastor and two representatives of the Protestant Church of Algeria (EPA) umbrella group addressed the congregation at length to persuade them to let justice run its course and not resist the authorities, he said.

“The assembly finally yielded and agreed to leave the premises, but with much pain,” Pastor Takilt told Morning Star News. “Some went out with eyes full of tears.”

After emptying the premises of all furniture and other items, the two officers rushed to seal every door, including an outdoor bathroom, he said.

Before the officer left, Pastor Takilt told him, “Know that we will continue to celebrate our worship outside, whether under the sun or in the rain,” he said.

Following a determination by the General Administration Regulatory Branch (DRAG), the church was sealed under an order from the Tizi-Ouzou provincial head citing a 2006 law, commonly referred to as Law 03/06, that requires authorization for non-Muslim places of worship.

Pastor Takilt said his church will now apply for permission under Law 03/06, which stipulates that churches must obtain permission from a national committee to be registered, but the committee has yet to officially consider such applications, sources said.

Under the same law, authorities on May 22 sealed shut another church building and its Bible school in Boudjima. The church had applied for permission under Law 03/06 and received no response.

Pastor Talkit’s church in Lekhmis village began in 2003. The church of more than 100 people has been affiliated with the EPA since 2006.

While three churches in Oran Province that the provincial head closed in November 2017 and February 2018 have since reopened, others that authorities closed last year in Akbou, in Kabylie Region, remain sealed.

On Dec. 30, authorities ordered the closure of an evangelical church in Ait-Jimaa village, 45 kilometers (27 miles) from Tizi-Ouzou.

The EPA has 45 affiliated churches throughout the country with nearly 50,000 Christians. Since November 2017, “building-safety committees” have visited most EPA-affiliated churches and inquired about licenses required by the 2006 law regulating non-Muslim worship, according to advocacy group Middle East Concern (MEC).

Islam is the state religion in Algeria, where 99 percent of the population of 40 million are Muslim. Since 2000, thousands of Algerian Muslims have put their faith in Christ. Algerian officials estimate the number of Christians at 50,000, but others say it could be twice that number.