“Guaguaseo”, a bus to serve the homeless

Hairdressing and other services will be offered in a bus driving through the streets of Fuerteventura (Spain). A project of a local evangelical church.

Fuerteventura will be the first place in Spain with a unique social project: a bus with a hair salon and toiletries for the homeless, which will offer its service for free, in order to “improve the quality of life of people living on the street", the Modern Christian Mission Church explained in its website.

The evangelical church offers several social services, like a soup kitchen, a parenting school or a training center for unemployed people.

The “Guaguaseo”, which receives its name from the Canarian word for “bus” (“guagua”), and “aseo”, a Spanish word which means “bathroom”, will be inaugurated on October 16. The President of the Canary Islands, Fernando Clavijo, has confirmed his presence at the inauguration.

"The project was born in 2010 and in 2014 we were able to ask for the `Guagua´", says pastor Angel Manuel Hernandez, who explains that the whole church has been involved in the project. 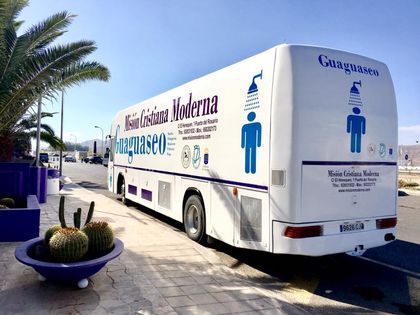 The 10-euro donations from its have helped to completely fix the bus that the government gave them.

"It has taken us a whole year to raise 10,000 euro”, but with the solidarity of three companies which have helped them with monetary donations, fixing parts of the bus, or donating the wheels for the bus, “we have been able to achieve this wonderful project”.

This is a pioneering project in Spain. There is only one similar in San Francisco, in the United States. The first thing users will find on the bus, will be a table with a computer to register, and where they will receive help to make a resume.

The bus will go throughout the streets of Fuerteventura, offering services like pedicure, manicure, hairdressing and grooming. All of these services will be offered for free.

Additionally, once a year, the “Guaguaseo” will visit other islands, to promote the original social project and, maybe, inspire similar actions elsewhere.

Published in: Evangelical Focus - cities - “Guaguaseo”, a bus to serve the homeless