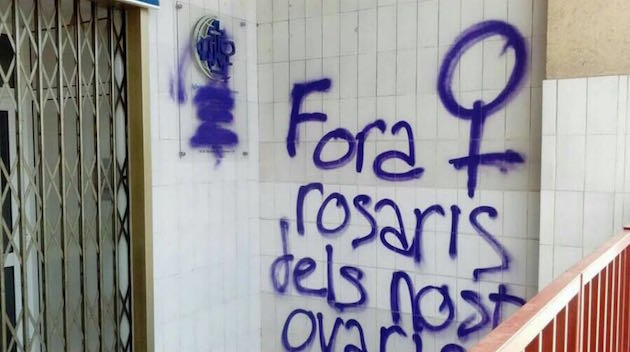 An evangelical Church in Barcelona was attacked with offensive graffiti last Wednesday, March 8.
The graffiti said: “Get the rosaries out of our ovaries" (in Catalan), along with the female gender sign. The graffiti covered the sign of the church where the schedules of the meetings are shown.

FIRST TIME
This evangelical church has been working in this central neighborhood of Barcelona for about thirty years, and they have gathered in that building for around fifteen years.

The pastor of the church, Jorge Álvarez, told Spanish online newspaper, Protestante Digital, that this has been the first time they have experienced this kind of incident.

"We have never had a problem like this, so it has really impacted us" , the pastor explained.

MORE GRAFFITIS IN THE NEIGHBORHOOD
There were more graffitis around the neighborhood, also related to the International Women's Day, "but not with an offensive message like ours", Jorge Alvarez said. 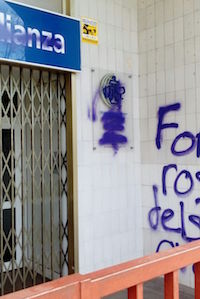 The church has denounced the attack in the Town Hall: "At first they said that they would clean it, but then when they saw that the graffiti is not directly on the street, they told us that it is our responsability”, Álvarez pointed out.
They also informed the Mossos d'Esquadra (Catalonian police).

ENCOURAGED DESPITE THE ATTACKS
The pastor also talked about the mood of the congregation. "Some have really felt attacked, but we are also seeing that this is an opportunity to make ourselves known in the neighborhood, because neighbours have come to see the graffiti."

The situation has "motivated us to continue with our mission", Alvarez affirmed.
On Thursday, the congregation gathered for their usual prayer meeting. "After the initial indignation, we see this as an opportunity to make ourselves known. God has control, and we see in the Bible that, after every attack, there is an opportunity to share the gospel”, the pastor concluded.