The pastor of the Armenian Evangelical Church of Alfortville and his wife were sleeping in the first floor when the fire started. It is the third arson attack against an evangelical church in France in the last 12 months. 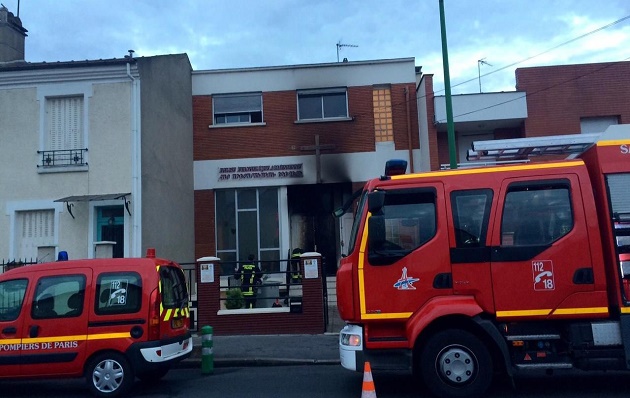 The façade of the Armenian Evangelical Church Alfortville, after the attack. / Le Parisien

A fire erupted in the Armenian Evangelical Church of Alfortville (near Paris) on Sunday 2 April, at 6 a.m. The flames woke up Pastor Gilbert Léonian and his wife, who live in the first floor.

The fire was a “shocked” because they were sleeping, the pastor said, but they were not physically injured.

It is the second incident against this church in a very short time. Eight days earlier, stones were thrown against the façade of the building and the interphone was damaged.

Léonian arrived as pastor for this church 18 months ago and leads this Christian community of 30 people, newspaper Le Parisien reported.

These attacks are “a surprise in such a quiet neighbourhood”, the pastor said. They are worrying but “do not make us feel angry”.

The Sunday worship service was not cancelled, but celebrated in a different room of the church.

MAYOR AND EVANGELICALS CONDEMN THE ATTACK

The Mayor of Alfortville condemned the arson attack and expressed his solidarity with the leadership of the church:

In addition, the National Council of Evangelicals in France (CNEF), expressed in a statement their “compassion and prayers” for the church in Alfortville and said “freedom of worship and freedom of speech, which are sometimes challenged in our country”, are a priority. 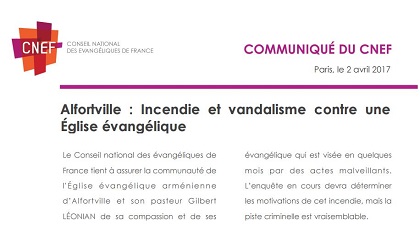 ATTACKS AGAINST EVANGELICAL CHURCHES IN 2016

On July 12, an evangelical church was attacked in the city of Calais (North West).

In May 18, another church was similarily attacked in Manosque (South East). Both were Assemblies of God churches.