Protests against a Catholic bishop for his views about homosexuality

A bishop in Spain was booed by 100 people after a Sunday worship service. “Debate is being replaced by coercion”, says Jaume Llenas, secretary general of the Spanish Evangelical Alliance. 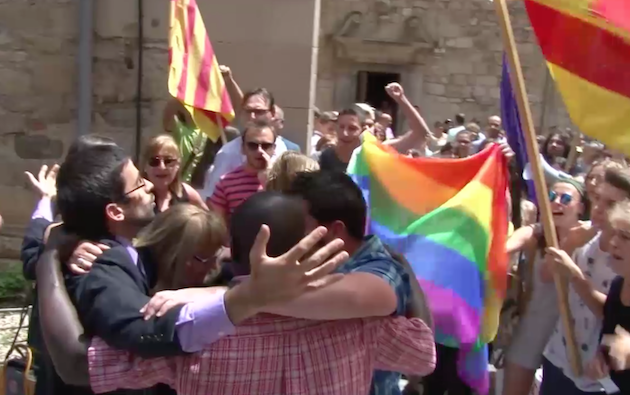 A group of parishioners prayed together in front of the activists. / TV3

The Catholic bishop of Solsona (Spanish region of Catalonia), Xavier Novell, was booed on Sunday by a hundred people who gathered outside the parish church of Santa Maria de l'Alba.

This public protest (known as “escrache”, which normally targets politicians) had been summoned by LGBTI groups which denounced the bishop for the comments he made about homosexuality in his homily the week before.

Novell had said that one of the reasons that led to a rise of homosexuality is that “in Western cultures, the figure of the father would be symbolically absent, deviant, blurred.”

Afer his words were shared on social media, Novell's views were strongly criticised by various pressure groups, including political representatives.

A few days after the protests, the city council of Cervera, in the region, declared Novell “persona non grata”, and asked the Catalan Parliament to do the same.

Novell is one of the youngest Roman Catholic bishops in Spain.

CHANTS AGAINST THE BISHOP

Demonstrators gathered in front of the temple at the beginning of the ceremony and displayed banners with slogans against what tey described as homophobia, and in favor of sexual freedom.

Chants like “bishop, show your face”, “we love as we want”, “homophobia has a cure: education” or “the bishop is not welcome” were heard. There were also rainbow and Catalonian flags.

After reading a manifesto, protesters went to the side door of the parish, where around 1:30 p.m. those inside the church began to leave, surprised to see a protest that had nothing to do with the confirmation of young people that had just been celebrated inside the building. 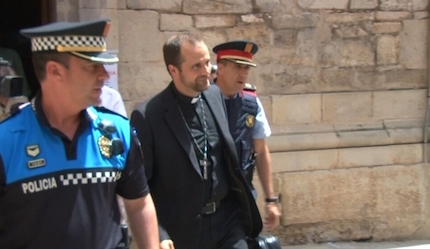 Because of the increasing booing, Novell had to leave church building protected by the regional and local police officers. He decided not to address the protesters.

Once he got into the car and left the place, a group of parishioners prayed together in front of the activists, while they continued to protest.

LGTBI SPOKESMAN: “INSULTING US IN THE NAME OF GOD”

Eugeni Rodríguez, a spokesman for the Observatory Against Homophobia, participated in the protest and later called on the regional Parliament to call Novell to an urgent meeting with LGBTI groups.

Rodríguez believes that the views of homosexuality by ecclesiastical representatives generate a “very hard situation for the people here, because they are insulting and marginalizing in the name of God.”

“DEBATE IS REPLACED BY COERCION”

The growing pressure of LGBT in public spaces is a situation that has been happening repeatedly in recent months in Spain.

Several Christian groups have expressed concern regarding the state of freedom of speech in the country.

“As evangelicals, we are seriously concerned about the harassment of bishop Xavier Novell, just because he has expressed his ideas”, Jaume Llenas, secretary general of the Spanish Evangelical Alliance, told Spanish online newspaper Protestante Digital.

“It is fair to disagree ideologically, and this discrepancy should propel a debate of ideas, with arguments from both sides”, said Llenas. But it is worrying to see that “the debate is being replaced by coercion.”

“The authorities were chosen to ensure that the public arena would be a space for free competition, where ideas are expressed on equal terms. Fundamental rights of all are at stake.”

“Justice is not measured how those in the mainstream are treated, but by whether those who are in the minority have also their rights recognised”, the evangelcal representative added.

Published in: Evangelical Focus - cities - Protests against a Catholic bishop for his views about homosexuality