Red Cross donation buses were invited to some of the commemorative events of the 500th Anniversary of the Reformation. “408 lives will be saved”, they said. 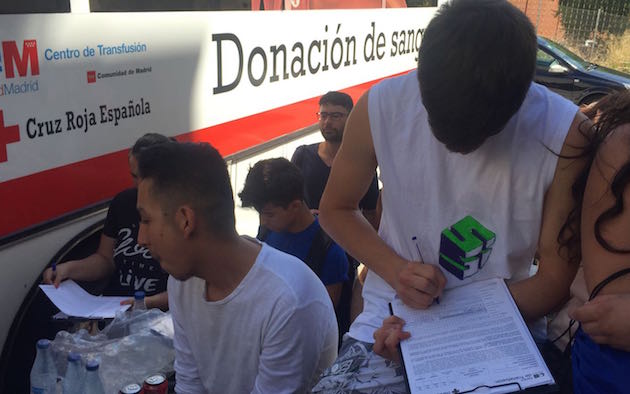 The Spanish Red Cross expressed its gratitude to all those who went to donate blood to their mobile units on July 12, 14 and 15 in Madrid, during the commemorative events of the 500th Anniversary of the Reformation.
Donation buses were invited to be present at the activities. The participants were motivated to donate blood and also to invite others to join the permanent campaign of Spanish Red Cross, which runs every day the cities of the country looking for donors.

The Urban Camp that took place during that week, with the participation of a thousand young people,was very important to achieve the social and humanitarian goal of helping Madrid citizens who need blood everyday.

They, not only went out into the streets to share the gospel to the passers-by, but were also key in promoting this campaign,donating blood actively and encouraging people to donate. 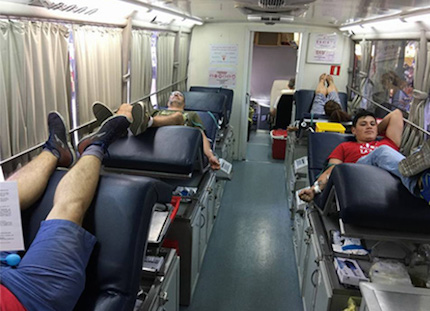 In its report, Cruz Roja explains that on Wednesday, when the camp was being held, a total of 72 people went to the mobile units to donate, 56 of whom were able to donate, and 33 were new, so they were from abroad or young people who had never donated before.

MORE THAN 400 LIVES SAVED
On Saturday 15, during the Festivalof Hope, 95 people were presented in Red Cross units, and 80 were able to donate.
In total, 167 people went to the blood donation units of the Red Cross invited by the organization of the 500 anniversary celebrations committe.
According to the Red Cross, these donations "will save 408 lives."

"We hope these data will serve to convey our sincere thanks, because thanks to you many lives have been saved ", the Red Cross pointed out in its report. 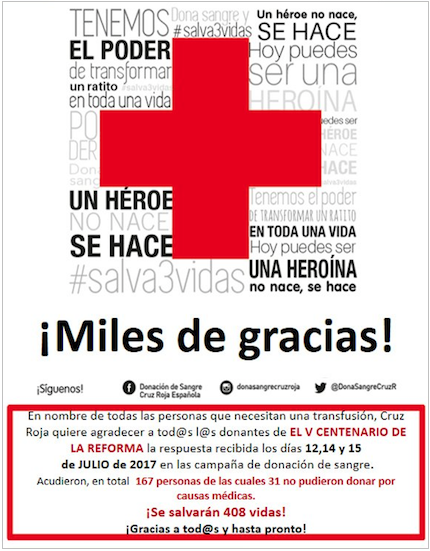 “IT IS IMPORTANT TO RAISE AWARENESS”
"We have come with two mobile units, and the acceptance has been very good. We cannot cope with it", said Veronica, a Red Cross worker, during the Festival of Hope.
"It is important to raise awareness among the  youth, because they will be donating for many more years", added the head of one of the mobile units.

Published in: Evangelical Focus - cities - Spanish Red Cross thanks evangelicals for their blood donation in the 500 anniversary of Refomation