Texts from the Bible, the Quran, the Torah and  Buddhist and secular  texts were read during the service by young people of different denominations. 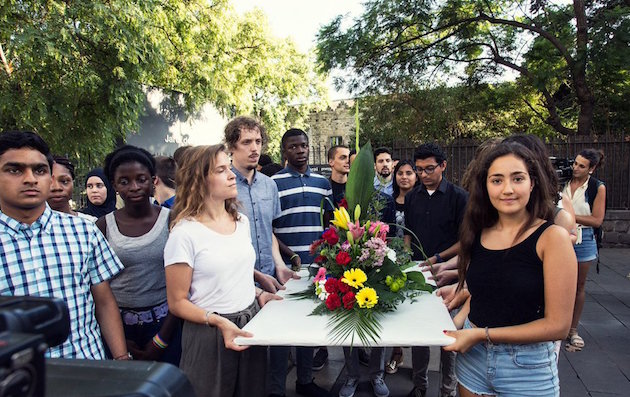 The young people were in charge of making the floral tribute, composed of 15 flowers, one for each mortal victim of the attack. / Aj. Barcelona

The Maritime Museum of Barcelona hosted an interfaith memorial service for the 15 victims of the attacks in Barcelona and Cambrils last Thursday.
The act, an initiative of the Barcelona City Council and the Generalitat (regional government) of Catalonia, sought to give "a plural space of remembrance to all the different victims, countries, beliefs and traditions", the Generalitat explained in a statement.

RELIGIOUS AND CULTURAL DIVERSTY
"The cultural and religious diversity in Catalonia is the main element of cohesion and social peace, the best antidote to hatred. That is why inclusive tributes like this make us believe in an open and welcoming society, to defend ourselves against intolerance", said Carme Sansa, an actress who led the act.
She finished the event reading a poem by Federico García Lorca dedicated to the Rambla of Barcelona, the main street of the city where the attacks took place.
The ceremony, which was jointly organized by the Barcelona City Council and the General Office of Religious Affairs, was attended by Justice Minister Rafael Catalá, as well as the mayoress of Barcelona, Ada Colau, the president of the Generalitat, Carles Puigdemont, and the President of the Parliament of Catalonia, Carme Forcadell.
The UNESCO Association for Interreligious Dialogue (AUDIR in Spanish) and the Stable Working Group on Religions (GTER in Spanish) helped the organization committee. 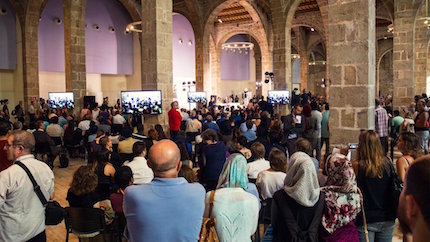 PEACE, A COMMON VALUE
Humanistic texts, fragments of the Bible, the Quran, the Torah and a Buddhist text were read during the service by young people of different denominations and traditions, who participate in the “Bridge builders” AUDIR project.
The texts chosen were consensual with the different communities and their common thread was the peace, an important value for all convictions.
The young people were in charge of making the floral tribute, composed of 15 flowers, one for each mortal victim of the attack.
The bouquet was then taken to the mosaic of Joan Miró in las Ramblas, the place where the citizens and tourists have honored the victims this week.