A drag queen for the Christmas parade in Madrid

A district of the Spanish capital city includes a LGBT float in the traditional ‘Three Wise Men’ parade for children. “We are all queens of our lives”, it says. 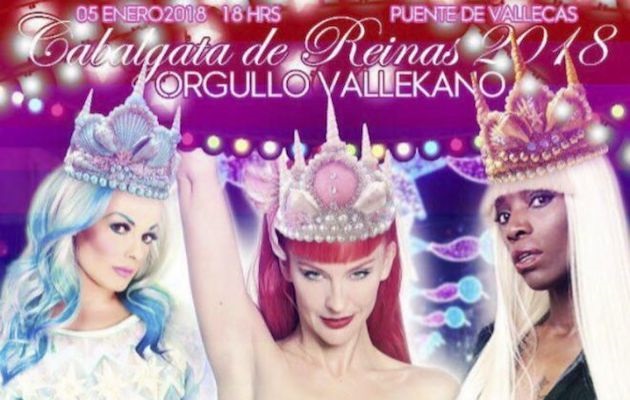 The promotional image of the LGBT float in the traditional Three Wise Men Christmas parade of Madrid. / Orgullo Vallekano

Now the LGBT lobby in the city will also disseminate its agenda among children in the traditional ‘Three Wise Men’ parole, the equivalent of Santa Claus in other countries.

Hundreds of thousands of children in every town and city of Spain eagerly await the arrival of the wise men on the 5th of January. The ‘Kings’, as they are known, ride through every Spanish city handing out sweets and smiles. On the 6th, many wake up hoping to unwrap some new toys and games.

This tradition was built on the biblical story found in Matthew 2:1-12, where it is described how “wise men from the East” followed a star to find Jesus, the Messiah.

A DRAG QUEEN FOR A “DIVERSE FAMILY”

A local LGBT group in Madrid will use this year the traditional parade to promote queer ideology among children. An alternative celebration was first planned, but then the city council in the district of Vallecas invited the group to join the official parade with its own float.

The organisers confirmed that they will show a rainbow flag and the mottos: “We are all queens of or own lives” and “Vallekas for diversity”.

The initial plan of the LGBT groups was to have three “queens” instead of the wise men, but the final plans are to dress like teddy bears.

LGBT IDEOLOGY IN SCHOOLS AND MEDIA

The promotion of LGBT ideologies in media, the health system and education has been one of the main talking points in Spain in 2017.

Regional laws already allow children choose the bathroom they want to use, and the national parliament is now working on a very controversial pro-LGBT law that will impose gender ideology in all areas of society.

Published in: Evangelical Focus - cities - A drag queen for the Christmas parade in Madrid