Multicultural churches: “We are a family in Christ, united by the gospel”

A local Spanish television channel reports on the Centro Cristiano La Roca church, which has people of more than 15 nationalities among its members. 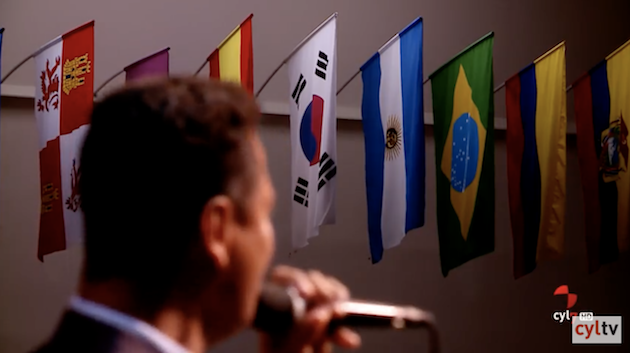 There are more than 15 nationalities represented in the Centro Cristiano La Roca church in Valladolid, Spain. / CyLTV

The impact of immigration has been a reality in Spain in recent years, in many areas. The evangelical church is one of the places where the integration of  migrants can best be seen.

The church Centro Cristiano La Roca (Christian Center The Rock), in the Spanish city of Valladolid, is an evangelical community founded in 1988 by pastor Kim, who arrived from South Korea without knowing Spanish, but with the goal of being integrated into the culture and bringing the gospel to people, not matter where they came from.

The church has grown over the last years, to currently have more than 15 nationalities represented.

“The common bond is the evangelical faith, which makes them understand life in a different way”, said the presenter of the program "Since I arrived", produced by the local Spanish television channel Castilla y León Television.

According to the website of the television, the program, “shows the everyday life of the new neighbours of Castilla y León who come from all around the world, from the personal perspective of its protagonists”.

That is why, the program has dedicated one of its episodes to the Centro Cristiano La Roca, interviewing its founder, and some of the members, like Caroline from Nigeria, Lúcio, from Peru, Yae Kun, from South Korea or Nicola, from Romania.

UNITED BY THE GOSPEL

Yae Kun believes that, despite all the cultural differences and traditions, “we are a family in Christ, united by the gospel”.

“Being part of this community is more than just attending a service, it is the gospel itself, to be able to live this faith as a whole. It is not a duty, but something that integrates all the areas of my life”, explained Javier Felipe, one of the pastors of the church.

“When you are with people with the same faith, you find peace, love. We pray together, for each other, we help each other”, said Caroline, who arrived from Nigeria with a family reunification program.

But “what makes the fundamental change in life is to know Jesus” said Lúcio.

All of them bring their particular history, but they agree on the importance of faith as a bond of union to build their life in the midst of this community.

“We can receive a lot of wealth from other cultures”, they all pointed out.

This a portion of the program (In Spanish):

Published in: Evangelical Focus - cities - Multicultural churches: “We are a family in Christ, united by the gospel”