Chaos broke out in a metro train in Valencia when passengers confused a group of preachers with terrorists. The nine Germans have been released on bail.

Video capture of the moment the group of German evangelists address other passengers on a subway train on August 4th. / Youtube

A woman was injured as dozens of passengers tried to escape a subway train in Valencia (Spain) when they confused a group of Christian preachers with Islamic terrorists.

The group of nine German evangelists, members of the Christian group “Werde-Licht” (in German: “Become a light”) visited the city of Valencia for several days, staying in the nearby town of Massamagrell.

On Saturday 4th, the group entered a train of the Line 3 of the Valencian subway at around 11 p.m. One of the men started to address the passengers in German as another member of the group translated his words into Spanish using a megaphone.

At that point of the night, the subway was packed with locals and tourists, including many young people using the public transport to go to bars and night clubs.

“THIS METRO IS FULL OF SIN”

Mobile phone video images published by several Spanish media outlets show one of the preachers speaking loudly, saying: “We have a message for you. This Metro is full of sin, full of alcohol. The Word of God says…”.

At this point, a passenger sitting nearby, unrelated to the group, is heard as saying: “We are all going to die!”. As the man realises the negative impact of his words, he shouts: “I’m joking!”.

But rapidly an avalanche formes as dozens try to leave the train. Surprised by the reaction, the evangelist with the megaphone says: “Don’t fear, only fear sin”, but the panick is difficult to stop at this point.

PASSENGERS PANIC AND TRY TO ESCAPE THE TRAIN

Images of the security cameras show how many passengers run in one direction, causing some people to fall over others.

According to local newspaper Las Provincias, security officers and police arrived to the site immediately, and the group of nine evangelists (aged between 19 and 42, according to the police) were asked to leave the train. Evangelistic materials with titles like “Where would you go if you died today? To heaven? To hell?” were confiscated and the men were finally arrested.

In the midst of the chaos, some calls to the police initially described shouts in Arabic and men wearing tunics carrying knives. All these rumours were later disproved by the police as fake alarms.

On Friday 10th, the nine men were released on bail after paying 3,000 Euro each.

But the group will not be able to leave Spain, because they must appear before the judge once every week. The court is now investigating if the group of German citizens is guilty of causing public disorders.

WERDE-LICHT: “WHAT HAPPENED WAS NOT OUR INTENTION”

In a video response published on Youtube, a leader of Werde-Licht, Markus VonAhmed apologised for the situation: “What happened was clearly not our intention”, he says, as he clarifies that it was not the original message of the group of evangelists what “caused the massive panic”.

“We are not a cult but very normal Christians, with our families and jobs” VonAhmed says. The aim of the the group, which includes former Muslims who have converted to Christianity, is to “witness in the cities that Jesus is the only God and Saviour”.

Spanish evangelical Christians reacted to news in the media with surprise. Local pastors in Valencia criticised what they believe was an unwise communication of the Christian message.

“I believe this is a clear example of a lack of contextual and transcultural communication of the gospel”, Jesús Londoño, coordinator of the Spanish Net of Missions told Spanish news website Protestante Digital. “One needs to know the people, the places and the times whenever we want to share God with others”.

Londoño spoke in the name of other mission workers in Spain, “hoping that this incident does not become an obstacle in future projects in which the message of the Good news is shared in our society”.

FEREDE: INCIDENTS SHOULD NOT BE USED TO STIGMATISE EVANGELICALS

Later, the Spanish Federation of Evangelical Religious Entities (FEREDE) and the Regional Evangelical Council of the Autonommous Community of Valencia, issued a joint statement. “We fully trust that the Spanish justice will solve this issue with proportionality and fairness”, hoping that the case will be solved “soon”. 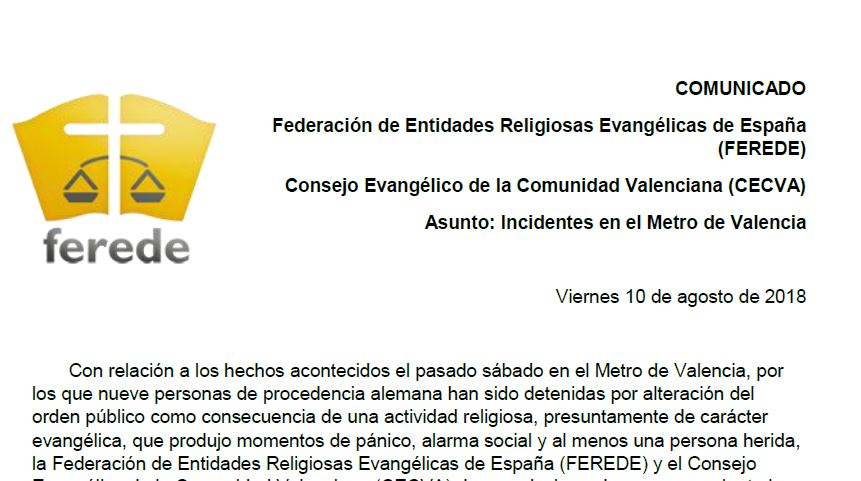 The statement summarises the content of the Spanish religious freedom law, which applies both to the places of worship and the public spaces. But “foreign people and organisations that wish to carry out religious activities in our country”, the evangelical federation says, should “get information about the norms that regulate religious freedom in Spain”.

The statement adds: “We hope these regrettable incidents do not happen again, and we hope they are not used by the media and some sectors of our society to caricature or stigmatise the beliefs of citizens, or suggest restrictions of the fundamental right of religious freedom”.

In a few days, Spain will remember the victims of the terrorist attacks of Barcelona, in which 15 people were killed on August 17th.