“Slavery exists in our cities”

Valencia, one of the 21 Spanish cities that joined the global #WalkForFreedom initiative. “The gospel is freedom”, said coordinator Sara Pérez. 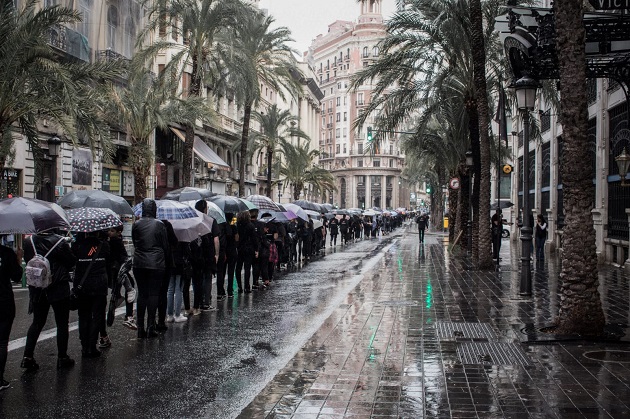 Despite the rain, 260 women crossed the city centre of Valencia (Spain) on October 20. They did so in silence and walking in a single-file line.

The initiative “Walk For Freedom” was happening simultaneously in other 21 cities of Spain, and in more than 400 cities in 51 countries. The aim was to denounce that there are 46 million slaves in the world right now, and that sex trafficking and the exploitation of women is a tragic reality in Spain and other European countries. 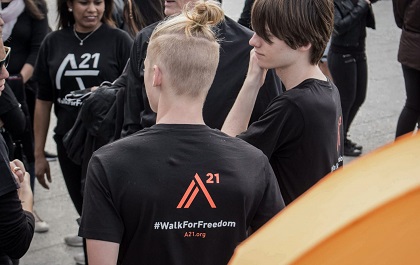 Only in Spain, the trafficking of human beings for sexual exploitation is a business that generates 5 Million Euro a day, according to a 2013 report of the government. Across the country, 53,000 girls and women are at risk, the Intelligence Centre against Terrorism and Organised Crime says.

Mafias have turned Spain into the second destination in Europe for trafficked women. According to the experts, the key to stop this reality is to reduce the strong demand for prostitution.

In Valencia, as the women marched through emblematic places like the Serrano Towers and the Town Hall Square, dozens of men followed the march on the sides of the street and approached the passers-by who had stopped to see what was happening. 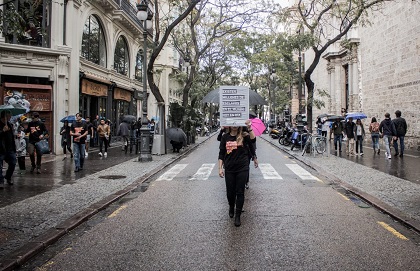 While sharing materials with information about the issue, they started short conversations to explain the ulcer that hides behind the prostitution in the city, and how precisely men are those who are called to lead a change of attitude to make buying sex socially unacceptable.

“How interesting, we were just talking about this issue!”, a group of university students sitting in a terrace of a restaurant said as the march passed next to them. “We are atheists, but we fully agree with you on this issue”, one of them added.

Tourists also stopped to see the initiative and took photos with their mobile phones. “Is there sexual exploitation here in Spain?”, a Russian women said surprised. “I knew that this happens in other places, like in my country, where they bring women from Belarus or Ukraine… I am one thousand per cent with you, this must change all around the world”.

“THE GERMAN MODEL IS A FIASCO”

During the march, Sara Pérez, one of the coordinators of “Walk For Freedom”, spoke to Evangelical Focus.

Question. What is your message today?

Answer. We want to show that behind prostitution there are victims of trafficking. And we want to say that slavery still exists in our cities, even though we think that it is something that has been abolished.

Q. Politicians and media have started to speak about the abolition of prostitution in the last months. What do you think about this shift?

A. It’s very positive, because we now have a real debate. There are people who don’t see it clearly yet, but it is good that there is a conversation about abolition, and that legalization is not seen automatically as the best solution. People are talking about how the German model of regulating prostitution has been a fiasco, and how abolitionism has been more effective in other countries.

Q. What does the police and other authorities say about the situation in Spain?

A. They speak of approximately 90% of women in prostitution being under the influence of criminal organisations, mainly mafias that traffic them from places like Eastern Europe, Nigeria, etc. They are lied to, and a similar pattern is followed in many cases. For instance: a voodoo rite is performed, and then they are brought to Libya, then to Italy, and then to Spain. It’s a business, and they keep repeating a system that is very effective.

A. Yes, the problem is that because prostitution is so visible, we assume that women can be used as just one more product. They are exhibited like a product you can buy. This normalises how children see women who can be consumed, and this of course is a big problem. 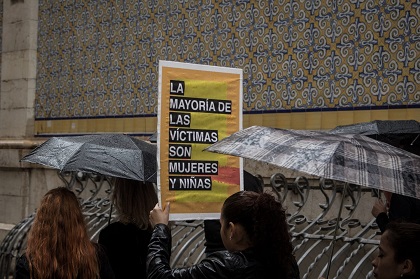 Q. As Christians, why do you think this whole issue is related to the gospel?

A. The gospel is freedom, and this has to do with setting people free. In a physical way, although there is, of course, also a spiritual liberation. We want to practice the message of Jesus of setting the captives free. This is something we all Christians are called to.

Q. Beyond the march today, are there other initiatives of Christians in this city to fight against slavery?

A. During the year, we mainly raise awareness: talks in institutes, initiatives in our neiughbourhoods, some charity concerts. We always say that once someone is aware of these realities, they will be able to make others aware in their workplaces, their schools… It just has to do with telling people about the truth of what is happening.

The march closed with the reading of a manifesto in the Pinazo square. Participants surrounded the exit of the Colón metro station, the main commercial district of Valencia.

“Prostitution is the worst form of violence against women. The fact that a woman sells her body for 20, 30 or 500 Euros so that a man can do whatever he wants to do with her, is the biggest act of inequality and domination of men against women. ‘I pay and you shut up and do what I tell you to do’. This is what happens in prostitution, no matter how we may try to present it in a different colour”, the text was read with a megaphone. 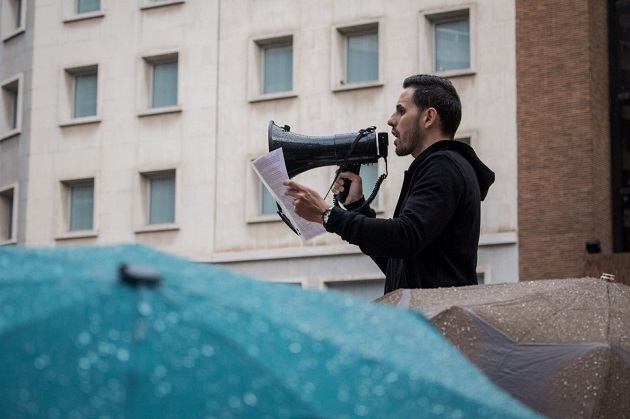 “We want more awareness campaigns in the streets and in the media, more education programmes in schools and institutes about trafficking and prostitution, and what it means to have a healthy sexuality, as well as education about what lies behind pornography. We want more protection for the victims through programmes of accompaniment, reintegration in the work market and more protection when they decide to report the pimps to the police”. (Read the full manifesto in Spanish).

Worldwide, more than 400 cities of 51 countries joined the marches, organised by A21, a global movement to make slavery history.

More potos about #CaminandoPorLibertad in Valencia:

Published in: Evangelical Focus - cities - “Slavery exists in our cities”