The organisers suggested that lack of confidence in the gospel is the main factor inhibiting the church’s effective witness to Christ today.

A Q&A time was the final session of the Confident Christianity conference in Dundee. / Solas CPC

Dundee’s Central Baptist Church played host to around three hundred people on November 3, who gathered to consider how to share the gospel in our age of tough questions, at the 2018 ‘Solas’ Conference.

They came from all over Scotland, the North of England (and one from Wales!) to explore “Confident Christianity”.

Jim Turrent, the pastor of Central Baptist welcomed everyone to Dundee and kicked proceedings off with a call for the church to embrace the Biblical call to unashamed gospel proclamation. He suggested that lack of confidence in the gospel is the main factor inhibiting the church’s effective witness to Christ today, and that the day’s theme was therefore urgent and pressing.

In a session entitled, “How to talk about Jesus without sounding like an idiot”, Dr Andy Bannister examined the way in which Jesus in the gospels engaged with individuals, asking probing questions to reveal their motivation and beliefs. Andy commended the similar use of questions today, and gave examples of conversations he has had when “what makes you ask that?”, has opened up deeper, more fruitful conversations, than instant, sharp answers to initial questions. Likewise, presenting gospel perspectives can be eased into more naturally by asking people to consider, “have you ever considered that….?”, Andy argued.

This crash-course in personal evangelism was especially well received. One attendee. Ewan Cathcart, commented: “I have enjoyed the conference very much indeed, in Dundee my hometown! I particularly enjoyed Andy, his style was terrific, and he dismantled a lot of things that are a problem in talking to other people. He put up some very useful suggestions of ways to do that, too”.

Sharon Dirckx holds a PhD in brain-imaging, and took the atheist materialist world-view to task by arguing that their view of humanity as merely a physical entity doesn’t just clash with Christian belief, but is poor science. Her first talk was entitled “Am I more than my brain?”, and examined the claims of atheists such as Sir Francis Crick, that humanity can be explained by (and reduced to) physical matter. Finding these views lacking, she provided some important pre-evangelism resources, especially for those involved in the physical sciences.

Andy Bannister’s second talk, “Am I matter, or do I matter?” applied this further, exploring our creation ‘in the image of God”. Here he looked at the ethical implications of materialism; and the way in which human rights and dignity require a grounding in a creator-God. 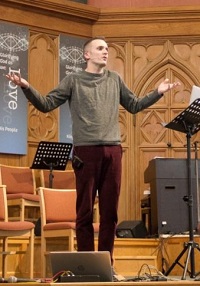 Dr Ben Thomas gave two talks on sexual ethics during the day. The first was his testimony of conversion to Christ, when he was sharing his life with his same-sex partner. He explained that deep wrestling with scripture led him to conclude that this could not continue, and why he has chosen a single, celibate life. He described the way in which he longed to find liberal/progressive views of the Bible persuasive; but had to concede that they were not. In one particularly memorable phrase, he said that he was compelled by the case that only God could define love. He spoke with great warmth and clarity about the cost, but also the great joys of the Christian life.

His second talk addressed how to share the gospel, faithfully and winsomely with LBGT+ friends, family and colleagues. Emphasising that behavioural changes are a response to grace, not a way of earning it, Ben encouraged the conference to talk openly about Jesus with LGBT people in the same way as with anyone else. Noting 1 Corinthians 6, that ‘the unrighteous will not inherit the Kingdom of God’, he pointed out that the list of sins there includes homosexual practice, but also idolatry, drunkenness, greed and so forth; and that there is not a different gospel for different people! He also challenged the church about her love, acceptance, and full inclusion of single people; who can sometimes be made to feel like lesser-Christians. The fact that both the Lord Jesus and the Apostle Paul were unmarried, should be all the evidence we need that this is wrong.

Dr Mark Stirling examined contemporary culture, and ways in which secularism seeks to claim the public square as its own, the consequences of this, and how we might respond. Of particular significance was that we confront the secular-myth that they are neutral and value-free, while Christians come with an agenda. This cultural presumption is both untrue (secular humanism is a very particular belief-system) and controlling (it uses its presumed neutrality to exclude other views).

He also spoke about sharing the gospel in an age when everyone takes offence, moving beyond hurling slogans, to a far deeper engagement. Illustrating the point from scripture and experience, he demonstrated that listening to people, developing deeper relationships, and being gracious and respectful is not in tension with apologetics; but essential for it.

He also warned the church in Scotland that we are ‘behind the curve’ in thinking deeply and profoundly about the cultural shifts around us, and that we need to pray and think hard, not regress to mere pragmatism. He commented afterwards: “I was offering some critique of the fact that as a church we have neglected a lot of the necessary hard work to understand culture, to engage with the ideas that are out there; and the failure to do so doesn’t make us more spiritual! It actually means that we are just less relevant and more marginalised. So part of my plea was that we do the necessary hard work which is both intellectual and spiritual. We must never let the academic and the practical be separated.”

Dr Sharon Dirckx brought the day to a conclusion with a talk about suffering. Weaving together national stories of suffering such as Grenfell Tower, with those of illness in her own family, Dr Dirckx examined elements of ‘the fall’, and probed towards the classic ‘freewill defence’. However, her final answer she said, was found in the gospel of Christ itself, and his promise of eternal life. Jesus Christ had entered time and space, and indeed embraced suffering in order not just to empathise with us, but to redeem us for all time. She encouraged people who had spent the day engaged in serious thinking, to ensure that they have trusted Christ themselves.

All the speakers were joined by Jim Turrent for a Q&A session during the afternoon. Questions written, texted or raised from the floor, included Jordan Peterson, same-sex marriage, creationism, and those who never hear the gospel. Many more questions were submitted than time allowed, suggesting that there is a need for more conferences. 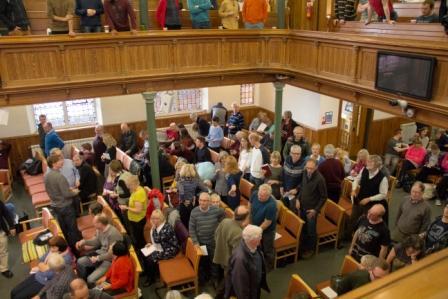 Reactions to the conference have been incredibly positive. Kevin Gordon, from Perth said: “I think it’s been amazing, I loved that talk about ‘questions’ and how to engage and dialogue with people’s questions and being respectful about it. It’s been so helpful, and I can’t wait to try and apply it, I really can’t!

Central Baptist Church invested a huge amount of time and effort in hosting the 2018 Conference, and were offered a long, heartfelt round of applause from those who had benefited from it.

Rev Jim Turrent, commented: “The reason we hosted this conference is that we think it is a really good thing to do and we think that Dundee is a really good place to do it. We’re excited about the quality of the speakers, and the equipping of the church both here in Dundee, and across Scotland, and the speakers that we have had, have not disappointed – they have been absolutely excellent. What we are hoping and praying is, that the fruit of this conference will be more Confident Christianity and more confident Christians, because they are the key to the re-evangelisation of Scotland, and The North.”

This article firs appeared in the Solas CPC website. Re-published with permission.