Madrid fines a coach €20,000 for offering help to people who struggle with same-sex attraction

The Vice President of the Regional government says in a press conference that new LGBT law will continue to be applied against such “very severe infractions”. Lawyers challenge the law in the Spanish Constitutional Court. 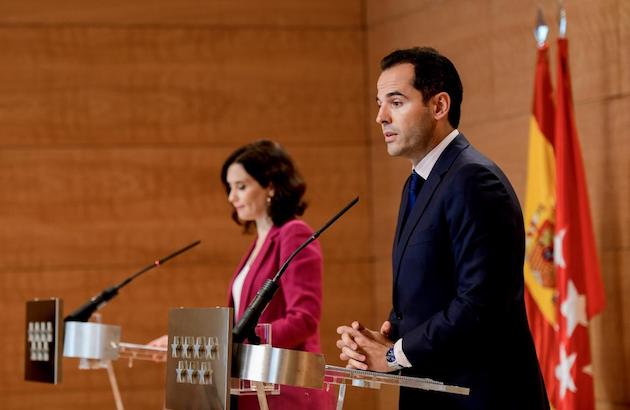 The Community of Madrid has fined Elena Lorenzo, a personal coach, with 20,001 Euro for committing a “very severe infraction” against the LGBT law passed in 2016.

It is the highest fine imposed under this law so far in this region of 6.6 million inhabitants.

The resolution was announced in a press conference by the Vice President of the Madrid regional government, Ignacio Aguado (leader of the liberal party Citizens). He said the authorities would “not take a single step back” in the defense of LGBT rights. The government was formed after the May election, and is led by President Isabel Ayuso Díaz, of the conservative People’s Party.

The inquiry was opened in 2016 after the LGBT group Arcópoli denounced what they said was an administrative infraction of Elena Lorenzo, accusing her of promoting online what the LGBT group described as “homosexuality healing therapies”.

Lorenzo responded to by saying that she has “never” offered homosexuality healing therapies. Her work has to do with professional accompaniment as a personal ‘coach’ for people who have expressed a desire to “leave same-sex attraction behind”.

Lorenzo, who offers her services through her website, has spoken out in the last months against the restrictions on freedoms that come with the new LGBT law in Madrid.

Meanwhile, the Christian Lawyers Association announced in May that it would bring the Madrid LGBT law to the Spanish Constitutional Court. According to the group, the law violates fundamental constitutional rights and should be repealed.

On March 19, the Technical Secretary General of the regional government resolved that the facts denounced by Arcópoli could constitute a very severe infraction, according to the article 70.4 of the 3/2016 law. One month later, the Council of the Government of Madrid started the proceeding to apply the fine that has now been made public.

A PREVIOUS FINE REVOKED BY THE COURTS

This is the highest fine imposed since the LGBT law was passed. Other proceedings have led to 18 sanctions due to minor infractions with fines between €200 and €1,800.

One of these fines imposed by the Madrid regional government has been revoked by the courts. In October 2018, a judge forced the Community of Madrid to return €1,000 and pay the cost of the proceedings to a school director who criticised the LGBT law.

The news about the fine were celebrated by pro-LGBT activists. “Despite being the lowest fine for very severe infractions, it is a historic and pioneer fine since never before in Spain a fine had been imposed for healing therapies addressed to LGBT people”, said Arcópoli.

This activist group has also reported the Catholic Bishop of Alcalá (Madrid) and one other website that offers counselling to same-sex attracted people.

Published in: Evangelical Focus - cities - Madrid fines a coach €20,000 for offering help to people who struggle with same-sex attraction