Montemolin, the town where the author and translator of the Bear Bible was born, hosted an event and an exhibition to honor the 450th anniversary of its publication.

A street in Montemolín eas the name of Casiodoro de Reina. / Emilio Monjo

On Friday, December 27, Montemolín, a small town of the Spanish province of Badajoz of about 1,400 inhabitants, paid tribute to one of its most illustrious neighbors: Casiodoro de Reina, continuing with the celebrations of the 450th anniversary of the Bear Bible that he traslated.

According to one of the promoters of these events, Emilio Monjo Bellido, director of the Spanish Protestantism Research and Memory Center (CIMPE), about 80 people, arriving from several parts of the region, participated the event. 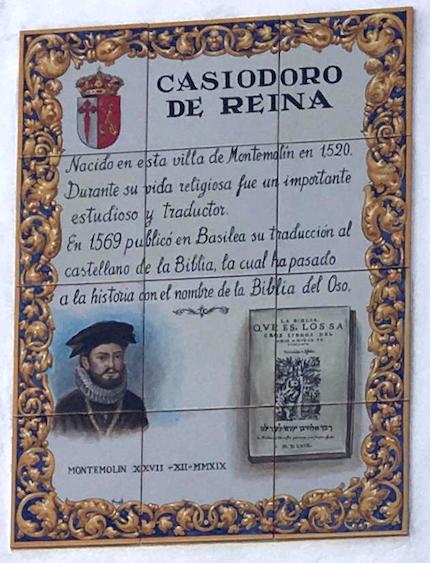 A BREAKFAST, A TALK AND AN EXHIBITION

The program began with a fraternal breakfast that took place in a rural shelter, to which all attendees were invited.

Afterwards, they went to the Town Hall, where the Mayor and the President of the Evangelical Council of Extremadura greeted the attendees. Then, Emilio Monjo gave a brief talk about the Reformation, focusing on Reina.

Furthermore, attendees could enjoy the exhibition of the History of Translation, centered on Casiodoro de Reina, which has been opened to the public in the Plenary Hall of the City Council since December 22.

“This exhibition tries to show the obvious need to translate the sacred text for those who do not know Hebrew or Greek. The exhibition also shows that even corruption could exist even among those who read the Bible, and forbade it for others”, explained Monjo, coordinator of the exhibition.

“We have also made available to the visitor, two facsimiles of translations of catechisms: one in Mexican Castilian and other in Quechua and Aymara Castilian, to show that the translation of the Bible to the native languages in America was not allowed either, but the catechisms were translated”.

In addition, “the exhibition has the current essential texts for today's translations: texts of Qumran, an updated Septuagint, the Greek Critical New Testament and the Hebrew Bible Stuttgartensia, to emphasise that rigor and research are still needed for a job well done, following Reina's footsteps, who used the best he had at his disposal”, Monjo added.

A STREET WITH HIS NAME

To end the events, a plaque was uncovered, in honor of Casiodoro de Reina, which was placed on the street that will now bear his name.

This is what the plaque says:

“Born in this town of Montemolín in 1520. During his religious life, he was an important scholar and translator. In 1569 he published his translation into Spanish of the Bible in Basel, which has gone down in history with the name of the Bear Bible”.

The regional television was present from the beginning to the end of the event, which was later broadcast on the noon news.