Some 1,500 guests attended the ecumenical service to mourn the victims of the Germanwings flight that crashed in France last month. 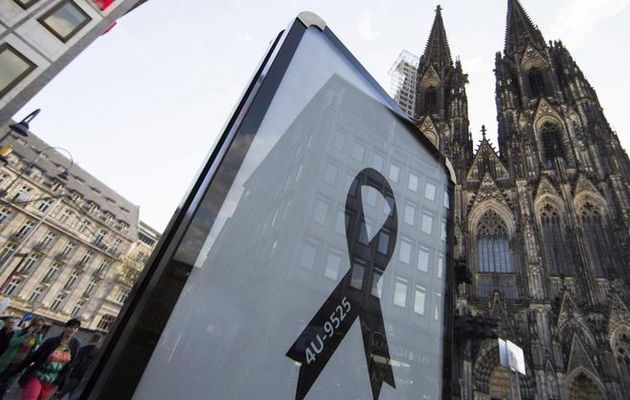 Outside the Cologne cathedral. / Deutsche Welle

Hundreds of relatives of the 150 people who died when Germanwings flight 4U9525 crashed into the French Alps have gathered in Cologne cathedral to grieve together and pay tribute to their loved ones.

The German chancellor, Angela Merkel, and other politicians from Germany, France and Spain were present at the ceremony on Friday, along with more than 50 rescue workers, airline crew, and mayors from the French towns located near the crash site. 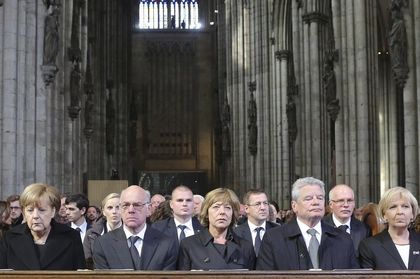 “WE HAVE NO WORDS FOR THIS DEED”

Joachim Gauck, the German president, fought back tears as he told the 1,400-strong congregation that even greater than the shock of the crash had been the realisation that it was a deliberate act of destruction. Prosecutors believe the co-pilot, Andreas Lubitz, 27, deliberately steered the plane into a ravine on 24 March.

“For many of us ... it was perhaps even worse to learn that the cause in all probability was no technical fault, but was evidently the deliberate act of a human”, he said. 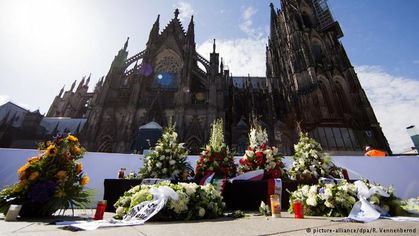 “This one person took many others with him to a death that he had sought for himself. We have no words for this deed”, he added.

Gauck also addressed Lubitz’s parents, who had been invited to the service but did not attend, saying: “We don’t know what was going on inside the co-pilot when he took his and 149 other people’s lives. But we do know that his relatives also lost a person they loved on 24 March. That has also left a hole in their lives.”

Paying tribute to everyone from the fire fighters to the forensic scientists who had worked on the aftermath of the crash under very difficult circumstances, Gauck acknowledged the huge emotional, psychological and physical strain they had been under as they salvaged the plane’s wreckage and victims’ body parts.

A candle for every life lost, including Lubitz’s, was placed on the altar. Relatives clutched wooden angels that were handed to them during the ceremony. They were shielded from the cameras, arriving on buses with blacked-out windows and accompanied by a team of psychologists and counsellors. 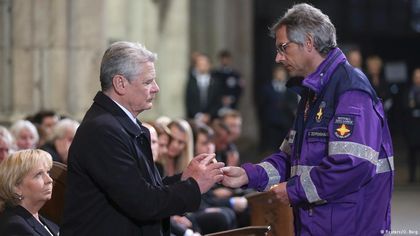 A young woman identified only as Sarah, who lost her sister in the crash, addressed the congregation, bringing tears to many as she prayed for the victims, asking God to “dry our tears strengthen the beautiful memories and give us new courage to face life”. “Give our deceased relatives and friends a new home and always take care of them”, she pleaded.

Throughout the ceremony, a choir sang verses from Gabriel Faure’s Requiem in D Minor. Luiza Fatyol, a singer from the Deutsche Oper Köln, performed the solo soprano part, Pie Jesu, in memory of her two friends, the opera singers Oleg Bryjak and Maria Radner, who were among the victims along with Radner’s husband and baby. 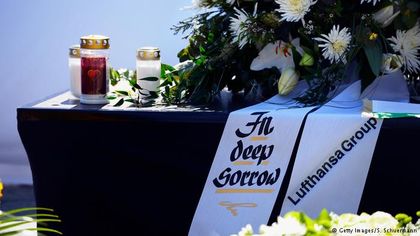 Teachers and a parent from Joseph-Koenig school in Haltern, western Germany, which lost 16 pupils and two teachers who were returning from an exchange holiday in Spain, performed the theme to the film Schindler’s List by John Williams.

Spain’s interior minister, Jorge Fernández Díaz, who accompanied a group of relatives and Spanish friends of the German exchange students to Cologne, said 24 March would always be engraved on his memory.

He also talked during the service “We are united in our pain and our disbelief. We must try to fill the hole once again, with love, but also with hope.”

LUFTHANSA, WITH THE VICTIMS

Lufthansa, the company that owns Germanwings, took out whole-page advertisements in several daily newspapers that read: “We’re mourning for the passengers and colleagues who lost their lives on 24 March 2015 in the Germanwings plane crash near Seyne-les-Alpes. We will never forget them.”

The parent company was represented by the German flag carrier's CEO, Carsten Spohr, as well as other executives.

The black mourning dress of the majority of the congregation was broken up by the colourful vests worn by at least 50 rescue workers from France and Germany, who were in the cathedral and read prayers at the altar. 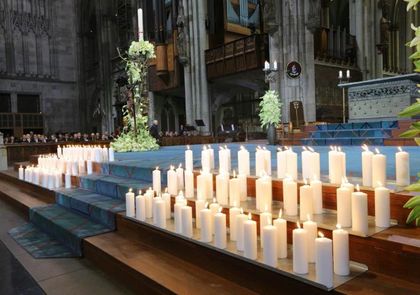 Hundreds of people who had been unable to get into the cathedral watched the two-hour ceremony, which was led by Cardinal Rainer Maria Woelki, of the Catholic church, and Annette Kurschus, a protestant pastor, on a screen outside and in a neighbouring church.

Advertising billboards across the city projected black and white messages reading “4U9525 24.03.15 We are in mourning” while German flags flew at half-mast, newsreaders and MPs were dressed in black and a one-minute silence was observed at midday.