Assemblies of God seminaries, united for the mission in Europe

The seminaries of France, Italy, Portugal and Spain gathered in Cordoba, and signed an institutional agreement of mutual cooperation. 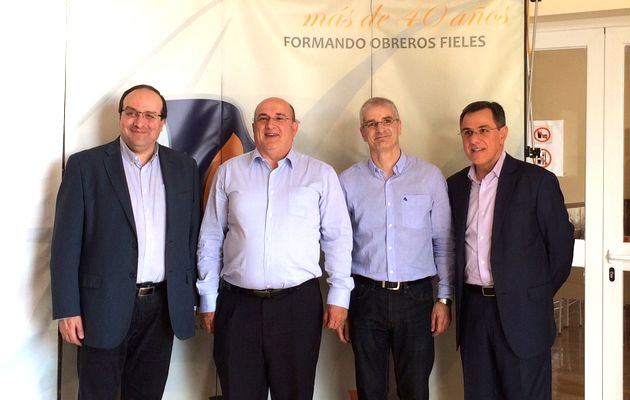 The III Gathering of the rectors of Italy, France Spain and Portugal’s Assemblies of God (AG) seminaries, has taken place in the University of Theology at La Carlota, Cordoba, organized by the Southern Europe Assemblies of God Fraternal Organization.

The rectors Lionel Rolland (France), Pablo Branco (Portugal), Jesús Caramés (Spain), and Eliseo Cardarelli (Italy) were present in the meeting, and that made it possible to create an institutional agreement, which will facilitate common projects and the use of tools, in order to strengthen and reinforce the four institutions’ priority: the ministerial training of men and women who transform Europe.

The working sessions allowed the attendees to know the reality and the challenges of the others, as well as of the church in Europe. They shared visions and future goals, methodologies, curricula projects, and ministerial organization skills.

Many internal procedures were analyzed, and they specially pointed out the necessity of strengthening attitudes of sanctification, consecration and commitment among the students, along with the Pentecostal identity. Other issues related to the raining process were also analyzed, like the use and application of new technologies, social media, cooperative work, etc.

Additionally, they work towards better personal relationships, not only among teachers and directive teams, but also among students, so that they will be able to make interchanges in the future.

RECEPTION WITH THE MAYOR

Antonio Granados, Mayor of La Carlota, met with the rectors and confirmed the municipal commitment of collaboration with the University of Theology. He thanked the spirit of working and social implication that the church and the university have.

Afterwards, they made a short tour, visiting the township, which has Protestant roots. They visited the Colonist Museum, where you can see the initial smallholdings, with the number 92 and 93, the place for the current University’s headquarters, where everybody works tirelessly to equip competent workers who spread the message og the gospel wherever God calls them to go.

Published in: Evangelical Focus - cities - Assemblies of God seminaries, united for the mission in Europe