Brazil is the country where more Bibles were distributed. The figures rise significantly in conflict countries like Syria and Ukraine. 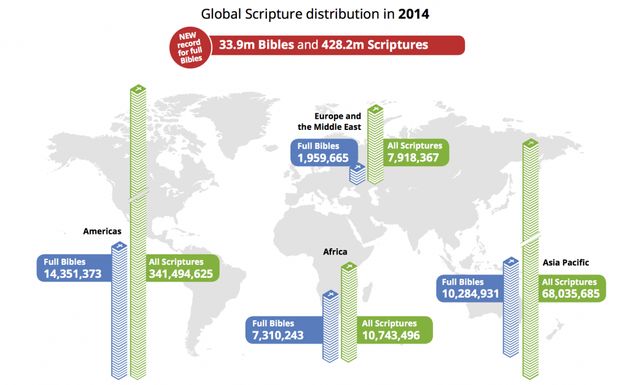 In total, 428.2 million Scriptures were distributed by Bible Societies in 2014

2014 saw the highest number of printed Bibles ever distributed by Bible Societies around the world. Nearly 34 million full Bibles were distributed, a rise of 6% over 2013’s figures, and 14% higher than the number distributed in the first year of the decade.

In total, 428.2 million Scriptures were distributed by Bible Societies in 2014, including full Bibles, Testaments, Gospels and other smaller Scripture items – representing a 7% and a 17% increase over 2013 and 2010 respectively.

The region reporting the highest distribution in 2014, consistent with previous years, is the Americas, with 341.5 million Scriptures, including 14.4 million full Bibles. This region has seen significant year-on-year increases in Scripture distribution in the first five years of the decade, its 2014 figure nearly 20% higher than 2010’s.

Although Brazil’s distribution figures have always been high, largely due to the Bible Society’s comprehensive program of social outreach and its good relationship with all churches, last year’s figures were partly boosted by the many thousands of Scriptures handed out during the FIFA World Cup. 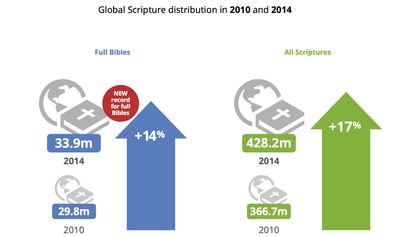 “Brazilians are football mad, and the World Cup was a wonderful opportunity to share God’s Word with the many football fans who were celebrating the tournament,” comments Bible Society Executive Director Dr Rudi Zimmer.

Cuba’s figures tell a story of rapid church growth, which is fuelling an enormous demand for Scriptures. Last year, 1.5 million Scriptures were distributed there – more than double the total distributed in 2010.

And four times the number of full Bibles were distributed there last year compared with 2013, thanks to the United Bible Societies’ Cuba Million Bible Mission project, which aims to provide one million full Bibles to Christians in Cuba.

Africa’s overall Scripture distribution figures fluctuate from year to year, but it has seen a steady increase in the distribution of full Bibles since the start of the decade. The 7.3 million Bibles distributed there in 2014 represent a 31% rise over the number distributed in 2010.

Nigeria and South Africa continue to be the Scripture distribution giants of Africa, at around 4.5 million and 1.5 million copies respectively, but some notable increases are taking place in smaller countries. The troubled Central African Republic, for instance, has seen its annual Scripture distribution triple from just under 9,000 in 2010 to nearly 29,000 in 2014, most of which were full Bibles.

The rises happened in some surprising places. More than five times the number of Testaments were distributed in war-torn Syria in 2014 than in 2010, before the conflict began. 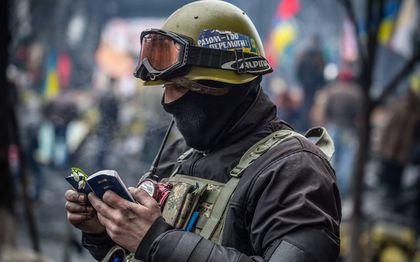 And, in the midst of one of the most difficult years in Ukraine’s recent history, last year the Bible Society there distributed nearly 70,000 New Testaments – 48% more than in 2012 and 10 times more than in 2010.

Asia – the world’s most populous region – saw a 6% increase in Scripture distribution between 2013 and 2014. Some notable increases have taken place over the first five years of the decade in several Asian countries, including the two giants – India and China, which distributed 22% and 10% more in 2014 than in 2010. The Philippines – Asia’s largest Christian nation – distributed 42% more Scriptures in 2014 than in 2010, and Myanmar an impressive 45% more.

In addition to distributing a record number of printed Scriptures in 2014, Bible Societies also reported significant increases in the distribution of non-print Scripture items. (These include Scripture-based products on CDs, cassettes, DVDs, mp3s, texts and internet downloads, but do not include Bible Society Scripture texts accessed through apps such as YouVersion or BibleSearch.)