“Images are a universal language everyone can understand”

Swiss cartoonist Alain Auderset on how his ‘Willy Grunch’ animation video went viral on Facebook. His new project, a “book without words” to share the gospel. 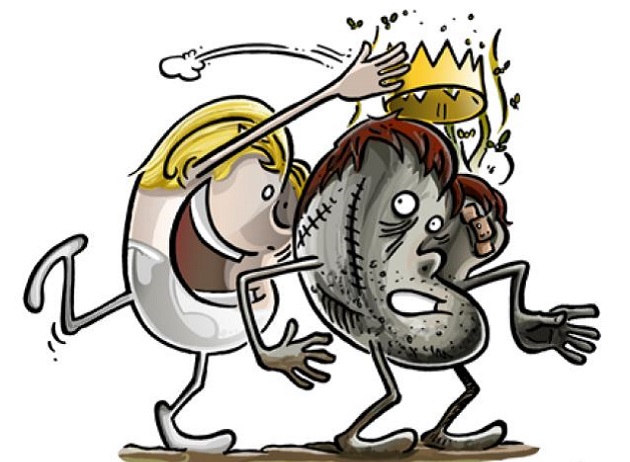 A scene of the Coeur book, by Alain Auderset.

Alain Auderset lives with his family in a typical Swiss house, and loves to be surrounded by nature. In the last years, the artist's comic stories have had a significant impact (110,000 books sold) both in his country and beyond: France, Germany, USA...

A part from his designer facet, Alain plays rock music with the Saahsal band and speaks about arts, life and God at schools, cultural associations, churches and any other places he is invited to. 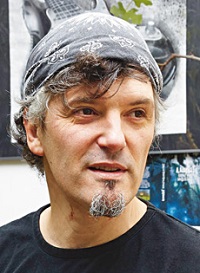 A 2-minute animation film he created 3 years ago his character Willy Grunch suddenly became viral on Facebook in March when an unknown Russian Facebook page posted his video. After some days, 3 million people had seen it. Auderset explains the details of the story in his Evangelical Focus Magazine section: Buzzzz.

In this interview, we also asked Alain about his new project to share the Bible message through drawings, his project “Heart”.

Question. Your Willy Grunch video suddenly went viral. How many visits has it? Did you expect something like this?

Answer. What is amazing about this buzz is not only that it has been seen 3.7 million times on the Russian site, but the fact that the same cartoon started to appear on other sites which are not connected to each other. Theen they told me about the video being posted on a site in Egypt, where it had half a million views in only two days. On another site from Venezuela it had 1.7 million more. It also appeared in France, and many other places. Right now we have surpassed the 28 million views, and it continues.

So no, I did not expect this. And yet, it all began exactly the same day I asked God for this project. On March, the 5th.

Q. Has this opened new doors for you as an author?

A. Yes, the 20 Minutes newspaper in Switzerland wrote about the video, and 2 million readers could read that God listens to our prayers. But more things are coming. The Moondog Animation Studio, the people with whom I did Willy Grunch, have started to search for the funds to create new episodes. Everyone can participate (here!) and help that new cartoons in the same line become a reality. I wrote two scripts which I think can touch a lot of people, at least as much as the first one!

Q. Speaking of your other new project, “Coeur”. In the whole book there is not one single word, but the message is very easy to understand and is presented in a funny way. What audience were you thinking about?

A. What is great about this is that images are a universal language everyone can understand. From children to adults (although older people are less used to understand visual contents). We are a generation that has grown up surrounded by images from the television, from films, cartoons and comics. So, the book is addressed to everyone, be it Westerners, Asians, Africans… It’s the ‘magic’ of image.

Q. What we do find turning the pages of the book is numbers (1,2,3…) which are connected to Bible verses at the end. Did you build the whole story on biblical texts?

A. In this book I wanted to summarise the essence of the Gospel, which consists in the gift of the life of the Son of God given for us, and salvation by Grace. The blood of Jesus washes us clean. So yes, in the book one finds a concentrated message of the Bible.

Q. Do you think people can identify with this ‘dirty heart’ in your book? Do people see themselves as lost and in need to be cleaned?

A. I think people do not admit their weaknesses in front of others, but when they are alone and honest with themselves, they realise that they have needs. At the same time, most people lie to themselves about their condition. Somehow we all believe we are better than others. Even us, the Christians, isn’t it true?

So we need the action of the Holy Spirit to convince people where they really are. If we want this book to be efficient, we should distribute it with the complicity of the Holy Spirit, because it is only Him who touches the hearts. 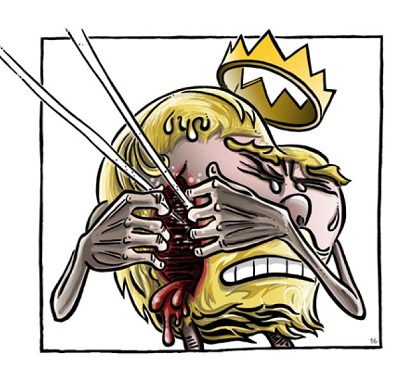 Q. One part of the story is when the King harms himself to let something new out. What did you want to communicate with this part?

A. The fact that God gave his Son brought great suffering to Him. Jesus is the most important 'thing' God the Father had. Glory and honour, gold, silver and other things he created, he could re-create whenever he wanted to. But giving his Son for us, who did not deserve it all, must have been terrible. So here we have the most beautiful proof of love one could imagine.

Q. A question you may have heard other times. Does your faith make you a “Christian artist”?

A. I consider myself to be a friend of God and it turns out that I also draw.

Q. Finally, if anyone wanted to get some copies of the book, how can they contact you?

A. Very easy, just write me an email to this address: [email protected]

If you want to learn more about the Heart book, then visit Alain Auderset’s website. You can also support the production of new Willy Grunch episodes here.

Published in: Evangelical Focus - culture - “Images are a universal language everyone can understand”