The cemetery has been found outside the walls of the Israelite port city of Ashkelon. The discovery of more than 200 bodies will reveal many details about how the Philistines lived. 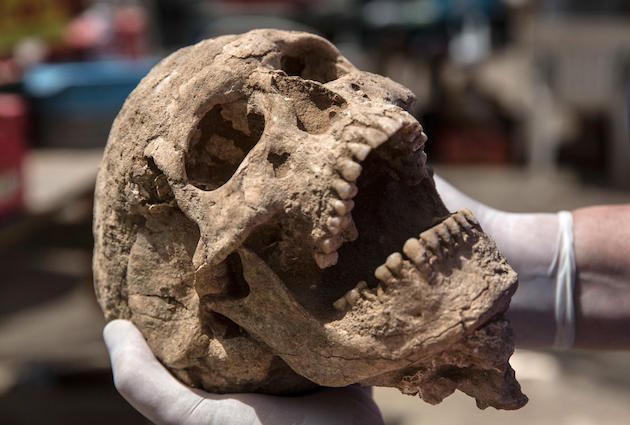 The cemetery contains more than 211 individuals and dated from the 11th to 8th centuries B.C.

Archaeologists digging at the southern coastal city of Ashkelon, announced Sunday the discovery of the first cemetery belonging to the ancient Israelites’ dreaded and shadowy nemeses, the Philistines.

Following the analysis of an unprecedented 30-year excavation in the Israelite port city of Ashkelon of the remains from the only Philistine cemetery ever discovered, one of the biggest mysteries in archaeology and academia may finally be solved.

The discovery of a cemetery containing more than 211 individuals and dated from the 11th to 8th centuries B.C., will give archaeologists the opportunity to answer critical questions regarding the origin of the Philistines and how they eventually assimilated into the local culture.

"This cemetery is going to teach us a whole lot about the Philistines that we've never known before", said Daniel Master, professor of archaeology at Wheaton College and co-director of the Leon Levy Expedition to Ashkelon.

Ashkelon was one of the five main Philistine cities for six centuries — , along with Gaza, Ashdod, Gath and Ekron — from the 1100s BCE down to Ashkelon’s destruction by Babylonian king Nebuchadnezzar’s army in 604 BCE. 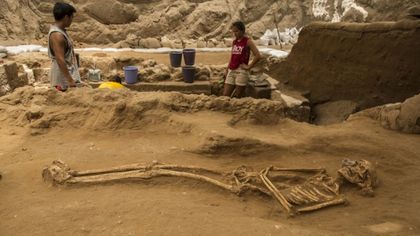 The excavations revealed a burial practice that is very different from that of the earlier Canaanites or the neighbouring Judeans.

While Canaanites and Israelites buried their dead in cave tombs, then collected the bones after the flesh decomposed, the Philistines buried their dead primarily in pits that were excavated for each individual: male or female, adult or child. Later, additional individuals were sometimes placed in the same pit.

Unlike the Egyptians, they deposited very few grave goods with each individual. Skeletons were found with a few pieces of jewelry, a small set of ceramics , a tiny juglet that may have once contained perfume, or even weapons. However, the majority of the Philistines were not buried with personal items.

Lawrence Stager, an emeritus professor of archaeology at Harvard University, who has led the Leon Levy Expedition to Ashkelon since 1985, explained that bone samples taken from the site, are currently undergoing three types of testing – DNA, radiocarbon, and biological distance studies – to help ascertain the Philistines’ origin. 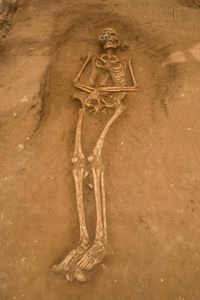 “Ashkelon was a key Mediterranean port and centre for maritime trade from the Bronze Age to the Crusades, when it was destroyed and left uninhabited until modern times”, said Stager, noting that sporadic excavations began in the area in the 19th century.

“Archaeological finds show civilized settlements at the site beginning in the late Chalcolithic period, with increased importance as a wayfaring station on the route from Egypt to Mesopotamia starting in the Bronze Age” , he concluded.

The Leon Levy Expedition – led by Stager, and funded by Leon Levy and Shelby White of New York – has been conducting large-scale excavations on the tel of ancient Ashkelon since 1985.

The archaeologists are capping off three decades of excavation this year with an Ashkelon retrospective at the Israel Museum that opens on July 11. "There couldn't be a better way to end this excavation", says Stager, referring to the fortuitous cemetery discovery.

Examining the remains has only just begun, and scholars are “only just scratching the surface” of how the Philistines lived and died.

PHILISTINES IN THE BIBLE

The Bible mentioned the Philistines in the Old Testament, being specially relevant during the Judges age, and in the reign of the first kings of Judah and Israel.

In Joshua, we read about their land, and the 5 cities already discovered by archaeologists:

“From the Shihor River on the east of Egypt to the territory of Ekron on the north, all of it counted as Canaanite though held by the five Philistine rulers in Gaza, Ashdod, Ashkelon, Gath and Ekron; the territory of the Avvites .”

In the book of Judges, we read the story of Samson , a judge who married a Philistine woman, and saw the Philistines as enemies:

“Now the rulers of the Philistines assembled to offer a great sacrifice to Dagon their god and to celebrate, saying, “Our god has delivered Samson, our enemy, into our hands.”

During the reigns of Saul and David, they are an enemy again. One of Israel´s greatest victories against the Philistines happened when David beat Goliath:

“As the Philistine moved closer to attack him, David ran quickly toward the battle line to meet him. Reaching into his bag and taking out a stone, he slung it and struck the Philistine on the forehead. The stone sank into his forehead, and he fell face down on the ground. So David triumphed over the Philistine with a sling and a stone; without a sword in his hand he struck down the Philistine and killed him. David ran and stood over him. He took hold of the Philistine’s sword and drew it from the sheath. After he killed him, he cut off his head with the sword.. When the Philistines saw that their hero was dead, they turned and ran.”

We find the last mention of the Philistines in Zechariah prophecy, one of the last books of the Old Testament. It talks about the hope of a Messiah, who will bring peace to a conflictive area:

“Tyre has built herself a stronghold;

But the Lord will take away her possessions

and destroy her power on the sea,

and she will be consumed by fire.

Ashkelon will see it and fear;
Gaza will writhe in agony,
and Ekron too, for her hope will wither.
Gaza will lose her king
and Ashkelon will be deserted.

A mongrel people will occupy Ashdod,
and I will put an end to the pride of the Philistines.

I will take the blood from their mouths,
the forbidden food from between their teeth.
Those who are left will belong to our God
and become a clan in Judah,
and Ekron will be like the Jebusites.

But I will encamp at my temple
to guard it against marauding forces.
Never again will an oppressor overrun my people,
for now I am keeping watch.

Rejoice greatly, Daughter Zion!
Shout, Daughter Jerusalem!
See, your king comes to you,
righteous and victorious,
lowly and riding on a donkey,
on a colt, the foal of a donkey.

I will take away the chariots from Ephraim
and the warhorses from Jerusalem,
and the battle bow will be broken.
He will proclaim peace to the nations.

His rule will extend from sea to sea
and from the River to the ends of the earth.”