Playmobil figures to explain the Reformation

A Christian in Spain built a diorama to tell both children and adults about Hus, Luther, Calvin and the impact of the first Bible translations five centuries ago. 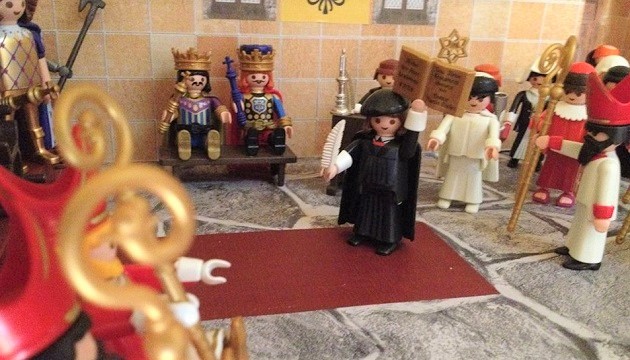 Luther and the Scripture, a scene of the Playmobil diorama created by a Spaniard to explain the Protestant Reformation. / Photo: Jose Luis Fernández.

God can use the Bible and normal people who trust in Him to make His light shine in the midst of darkness. This is how José Luis Fernández, a Christian living in Asturias (a Northern region in Spain) would explain the Protestant Reformation.

Through a diorama he built, “both children and those who are not that young anymore” can learn about the people who helped to start a spiritual and social revolution in Europe.

Using the popular Playmobil figures, this evangelical believer represents some of the key ‘scenes’ that are being commemorated 500 years later. 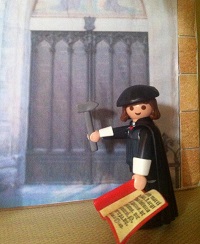 “I was thinking about preparing something simple, and the idea appeared after visiting a Playmobil exhibition. There, among many others, I saw a diorama about the biblical book of Exodus.” The exhibition was a success and the press covered it, “so I realised that the Scripture text going alongside those figures could actually be the most-read Bible passage in our region that year”, explains Fernández.

He built the diorama with the help of his sister, customising and painting the figures.

The sale of indulgences, the “treasure of the Church”, Luther’s 95 theses, the Diet of Worms, the printing of the first Bible in German, are included… John Calvin and Jan Hus  also appear. Even the first Spanish translation (the Bear Bible) and the newer translation into Euskera (the language of the nearby Basque Country) have their place in the diorama. 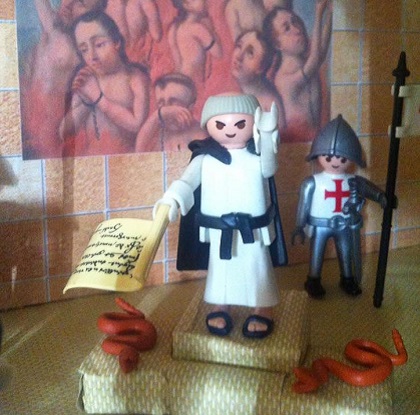 After using the diorama in his local church and in a school, Fernández says that often people who are not churchgoers have shown more interest in the Reformation than the actual believers.

The efforts to spread a basic knowledge about these historic events in a country like Spain, known for its strong Counter-Reformation in the 16th century, “bears fruit”, believes Fernández.

Be it in events with local politicians, cultural organisations and intellectuals in universities, or in spontaneous conversations with neighbours; the effects of the “return to the Bible” are well received. 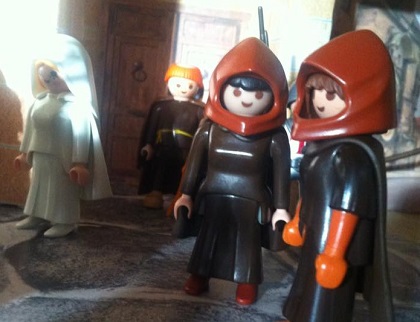 In addition to the many initatives happening in Spanish cities, Fernández and many other Christians hope that the big Reformation celebrations in Madrid in July will have echo in the national newspapers and televisions.

“TRUTHS REFLECTED IN A PLAYFUL WAY”

How would he explain the Protestant Reformation to children, we ask Fernández. “Something very visual is: In the midst of darkness God made his light shine through something as simple as the Bible and normal people who trusted in Him.”

That light of the Bible, re-discovered by the Reformers, “reached some of the areas of society, but also changed simple and quotidian things in people's daily lives”.

Fernández hopes this diorama will help “reflect these truths in a playful way.”