Puebla celebrates the 450 anniversary of the Bear Bible

The University of the Mexican city hosts an exhibition on the first translation of the Bible into Spanish. 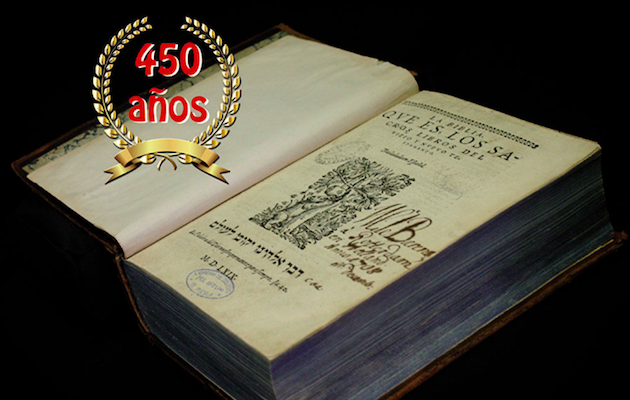 Poster of the exhibition. / BUAP

The Benmerite Autonomous University of Puebla,Mexico (BUAP in Spanish) hosts an exhibition on the 450 years of the Bear Bible these days.

“Many institutions of higher education, public and private, have in their archives a wealth of heritage; our responsibility is to keep it and make it available to society. For this reason, we are proud that today we present these works to the public”, said the rector of BUAP, Alfonso Esparza Ortiz, before opening the exhibition.

The UAP is the third most prestigious public institution in the country, and it has used its well-known Reading Room of the José María Lafragua Historical Library for this occasion.

Made up of 49 pieces, the exhibition commemorates the 450th anniversary of the publication of the Bear's Bible, the first complete translation of this text into Spanish, by the Spanish monk converted to Protestantism, Casiodoro de Reina.

The BUAP has one of the 32 original copies that exist in the world. The rest of the 2,600 volumes printed on the first run were destroyed, and that of the Mexican university is one of the best preserved.

The exhibition presents a tour of the main versions of the Bible throughout history, through historical documents and facsimile copies.

The main cultural and educational authorities of the region participated in the opening ceremony.

Esparza Ortiz highlighted the historical, literary, cultural and aesthetic value of this manuscript, and how much it has contributed to the Spanish-speaking world.

Casiodoro de Reina, the monk who translated the Bear's Bible, was persecuted by the Spanish Inquisition first, after his conversion to Protestantism, and then by some sectors of the reformers.

Therefore, the manuscript was made intermittently between Frankfurt, London, Geneva and Antwerp, all the places where he lived.

This manuscript receives its name from the engraving it shows in its first pages: a bear leaning on a tree with its front legs, eating the honey that falls from a honeycomb. In the scene there is also a hammer that hangs from one of the branches and hits the trunk.

The interpretation of this image is related to verse 9 of chapter 10 of Revelation: “Take it and eat it. It will turn your stomach sour, but ‘in your mouth it will be as sweet as honey”.

It is believed that this passage is related to the persecution that Casiodoro de Reina suffered and what he learnt after translating the text from the originals in Aramaic, Hebrew and Greek.

Published in: Evangelical Focus - culture - Puebla celebrates the 450 anniversary of the Bear Bible