“Integral help for refugees must be a priority for local churches”

The Refugee Highway Partnership (RHP) round tables gathered experts, Christian NGOs and church leaders in Catania to analyse the crisis Europe is facing and find ways to “offer integral help.” 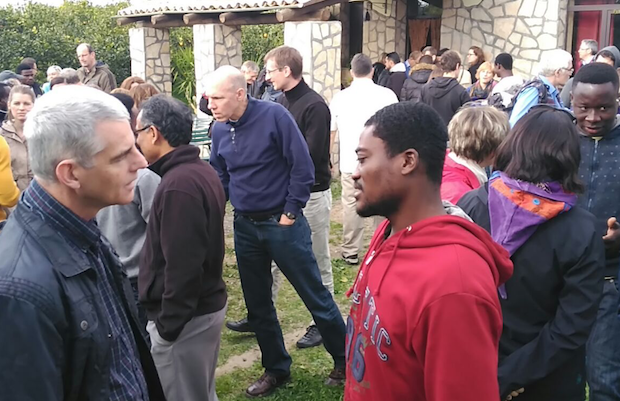 The RHP round table participants met with a group of refugees living in the Mineo refugee camp in Sicily. / Joel Forster

The refugee crisis continues to be the greatest challenge for Europe today. Thousands of people are leaving their countries to look for a better life, specially in countries like Germany, Swede, Turkey or Italy.

From February 8th until February 11th, the Refugee Highway Partnership round tables took place in Catania (Sicily, Italy). Christian experts, church leaders, and associations coming from across Europe shared resources and ideas to better serve the material and spiritual needs of refugees, asylum seekers and migrants. Local pastors from the Sicilian regional Evangelical Alliance were also involved in the program.

Evangelical Focus editor Joel Forster covered the event, and shared some of the initiatives discussed in an interview with Spain's Protestante Digital.

Read the text translated into English.

Question. Can you tell us a bit about the vision of these round tables?

This was the 13th edition and there were more than 80 participants coming from 17 different countries, which is a record of participation. It shows that the churches in Europe are more concerned about the refugee problem and understand that it has to become a priority.

There were ministries working at a regional level, trying to connect different movements in Europe; people who produce very specific resources for refugees (like special version of Bibles or Bible studies). Others train churches in how to make a first contact with the foreigners living in their neighborhoods.

There were also several people working in refugee camps or just close to those camps.

There was an insistance on not only giving material aid but also focusing on the spiritual needs: to offer integral help. The aim of all the participants in Catania was to connect the local church with the refugees' needs. 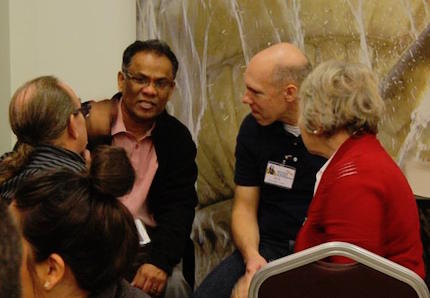 Q. Are there any refugees participating in the conference?

A. There are 2 refugees who have shared their stories with us. One is from Nigeria, he arrived to Italy through Libya. He told us he left some areas of desert behind, and arrived in a boat and received by the Italian authorities.

He now lives in Sicily with other 26 people in a similar condition. He is a believer, and he told us he studied audiovisual communication and hopes to find a job in that field here in Europe.

He has a passion for sharing the gospel with others. We have gone to a refugee camp here, and he talked some of the people living there now, telling them that they should look for their security and hope in God first, and then in the legal papers.

The other refugee who shared with us is a woman who now lives in Belgium, and comes from an Middle East country. In her destionation, she got in contact with an evangelical family that took her in, and it was there where she started to know Jesus.

She did not want to know about Christianity or any religious ideas, she told us, but after weeks of talking to Christians, she knew more about Jesus. She became a Christian after a very personal experience, thanks to the prayers of believers. She is a graphic designer and she would like to find a job in this area, too.

Q. What are these associations and ministries doing with the refugees?

A. We have heard about a ministry working in Turkey, where there are 2,5 million refugees. Many have just arrived, but others have been there for 2 or 3 years already.

Through the help of this group of people, some have known Jesus. When that happens, these new believers have a big desire to share their new faith with their people, so the ministries are trying to train them to lead Bible studies among other refugees. They give a SD card and a little speaker to the refugees, so that they can use them to hear texts of the Bible and discuss Scripture in their own language.

Another example is a local church in Germany. They have been working with refugees for more than 10 years and have a good relationship with the local authorities who let them work in a refugee camp.

The local authorities trust them and, although they cannot preach the gospel inside the camp, they are allowed to meet with the refugees outside the camp and share the gospel in activities like the “Jesus evenings.” There have been around 50 asylum seekers coming to the Christian faith in the last years.

This group is now also helping efugees to find accomodation and plans to create places where they can have a better life, outside the refugee camp. 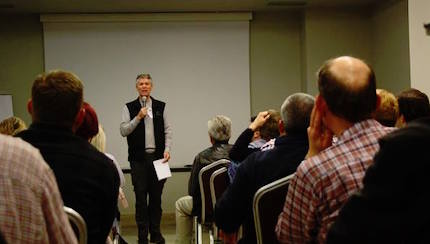 Q. You had the chance to go to a refugee camp. How was the experience?

A. We have been in Mineo, where there are still 2,000 people. They live in the housings of an old US military base that was not being used anymore. It is fenced and we saw the strong security measures outside.

The refugees who live there have asked for asylum, and are hpoing to get permission to stay in Italy. An evangelical pastor that usually visits the camp was leading us, but we did not get the permission to go inside the camp. But around 30 refugees were able to come out and meet with us in a house nearby.

It was a nice time of just meeting them, and get to know each other. We asked them about their situation, and each of them told us about their experience. Some started to sing worship songs spontaneously, and we prayed for each other.

I talked with a young man, and he told me that all those living in the camp  have a type of identity card to clock in every day.

Inside the camp, they live in houses which are in very bad conditions. They are distributed according to their ethnic group, origin or religion, which helps to avoid potential conflicts.

A curiosity they told us is that there is some alternative market they have inside the camp. Every week the authorities give them a cigarette packet, which has become a kind of currency inside the camp, and they would negotiate with these cigarrettes.

There are some Christian groups who meet inside the campo. There is a Nigerian Christian church, and a church for people from Ghana, Cameroon, etc.

It was very interesting to hear their stories, and it is tough to see that they depend on a permission to stay in the country. They have not much to do throughout the day, they told us. This means that there is 'too much time to think', about their families back home, their past, their lack of hope... and that can lead to depression. Many suffer under this uncertainty, waiting to get a positive answer from the Italian authorities.

We tried to encourage them and they also encouraged us with their faith. 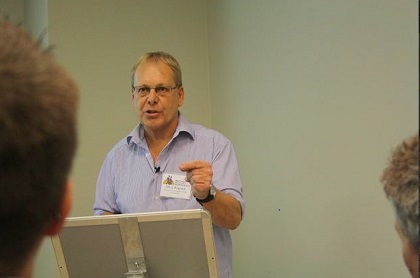 Q. Finally, what was your role during the RHP event?

A. We were interviewing many people who are working with refugees in different places in Europe. There are written interviews, and also video and sound recording interviews with people who will come out from this days together. I hope they will encourage the Christians in Europe to get more involved with the refugees living in their cities.

In the coming weeks, Evangelical Focus will publish a series of interviews recorded at the 2016 Refugee Highway Partnership round tables.

Published in: Evangelical Focus - europe - “Integral help for refugees must be a priority for local churches”