Hours after the election, left-wing anti-austerity leader Alexis Tsipras gets support of nationalist party. Analysts describe election as “revolt of the young against the corrupt elites”. 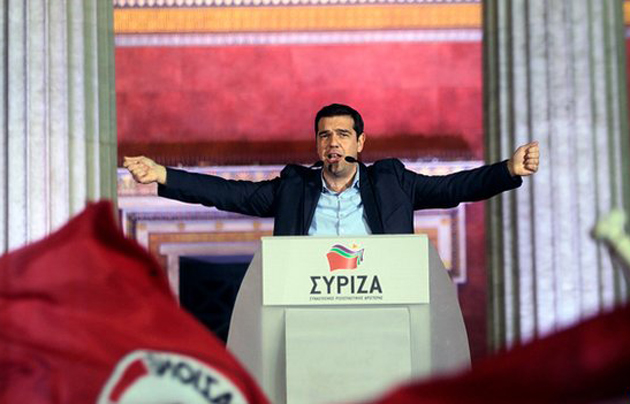 After weeks of polls suggesting it, elections confirmed what everyone expected: Alex Tsipras will be the next prime minister of Greece. Greek citizens gave him 36,3% of the votes in Sunday's election. New ruling party isonly 2 seats away from absolute majority in the Parliament.

With this result, Greece gives power to the voices who have been confronting European Union's austerity plans. New prime minister Tsipras will open a major crisis among EU-members and at the same time open the way for other new left-wing parties in the south of Europe (ally party in Spain Podemos also aspires to win 2015 general election, according to polls).

Tsipras forged an anti-austerity alliance within hours of his victory, challenging European peers with a declaration that the era of bowing to international demands for budget cuts is over.

Syriza party and the Independent Greeks announced their coalition in Athens Monday morning after Syriza won an historic victory in elections by harnessing a public backlash against years of belt-tightening, job losses and hardship. In his victory speech, Tsipras said his priority is “for Greece and its people to regain their lost dignity.”

The outgoing prime minister Antonis Samaras (New Democracy) came second with 27,8% of votes and neo-Nazi Golden Dawn party came third, tied with new party The river (both 7%). Traditional Labour party PASOK consumed their worst results with only 4,6% of the votes.

The election of a radical anti-corruption and anti-EU policy party is a clear sign of change in this Mediterranean country.

“The youth are usurped when oligarchy, corruption and elite politics stifle meritocracy. The sudden emergence of small centrist parties led by charismatic young professionals in Greece is testimony that this generation has had enough. But by the time they got their act together, Tsipras was already there”, analyst Paul Mason wrote in an article after the elections in The Guardian.

“From outside, Greece looks like a giant negative: but what lies beneath the rise of the radical left is the emergence of positive new values – among a layer of young people much wider than Syriza’s natural support base. These are the classic values of the networked generation: self-reliance, creativity, the willingness to treat life as a social experiment, a global Outlook”.