Spanish police claims the right not to attend religious parades

“The presence of police officers dressed in uniform in an Easter procession puts both the police and the citizens at risk”, a police association says. Officers should “only be assigned to protect the security of the citizens.” 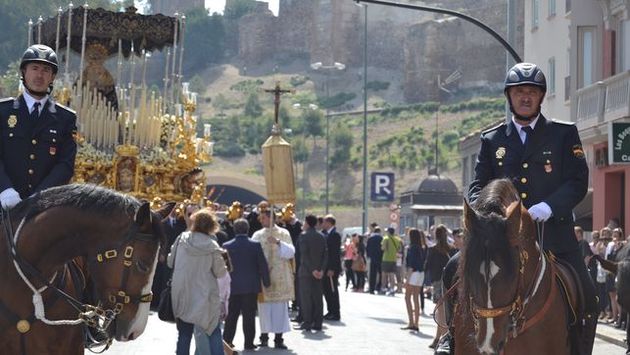 The Police Reformist Association (ARP in Spanish) has asked that members of the Spanish national police do not officially participate in Roman Catholic processions wearing their uniforms.

In a press release, the ARP has expressed its concern about the "unnecessary risks of participating in religious ceremonies with the uniform", and they have called the state to make a deep reflection about these kind of practices.

ARP spokesman, Luis Miguel Lorente, said Spain is a non-confessional state with laws that ensure the safety of workers. "We are in stage 4 of the anti-terrorism fight, and the presence of policemen dressed in uniform during a procession, puts both the police and the citizens at risk. The ARP is not against traditions, but asks for freedom to decide whether or not to go to a religious act.”

The ARP says that the recent terrorist attacks in London, which "took advantage of crowded places, and targeted uniformed police officers and citizens close to them”, are a warning “to make a deep reflection, considering the proximity of the Easter processions."

“NOT ADVISABLE TO PARADE”
The ARP makes a strong defence of Article 16 (1) of the Spanish Constitution: "Freedom of ideology, religion and worship of individuals and communities is guaranteed, with no other restriction on their expression than may be necessary to maintain public order as protected by law."

They express their utmost concern about this, "claiming that at this time it would not be advisable to parade along with the citizens, wearing a uniform."

The Article 4.2 of the Spanish Workers' Statute says: "Workers have the right not to be discriminated in access to job or in employment, by reason of sex, civil status, age within the bounds framed by this Act, race, social origin, religion or political ideas, sexual orientation, joining or not a trade union or not, or of language, within the Spanish State."

But the ARP denounces that in certain places it has become customary “to relate certain police groups to religious brotherhoods, without taking into account the decision of the police workers.”

“These decisions adopted unilaterally should be reviewed and updated", the ARP points out in its statement.

The Spanish Constitutional Court has ruled about these issues before, when, in response of an appeal for legal protection filed by a police who requested to be dispensed from attending a certain procession, it stated that "his religious freedom had been violated."

“PARTICIPATION SHOULD BE VOLUNTARY”

The Unified Civil Guard Association (AUGC in Spanish) also believes that “civil guards who participate in processions must be volunteers.” Now, the participation of the civil guards in religious acts is mandatory.

The violation of this order would be prosecuted under the Military Justice Code, and could lead to prison.

According to the AUGC, because of "the level 4 of anti-terrorist alert and their lack of resources, civil guards should only be assigned to protect and watch for the security of the citizens."