The Evangelical Lutheran Church of Finland is the only Nordic national church which doesn’t celebrate same-sex marriages. The Church Synod of the church discussed intensively about it in May. 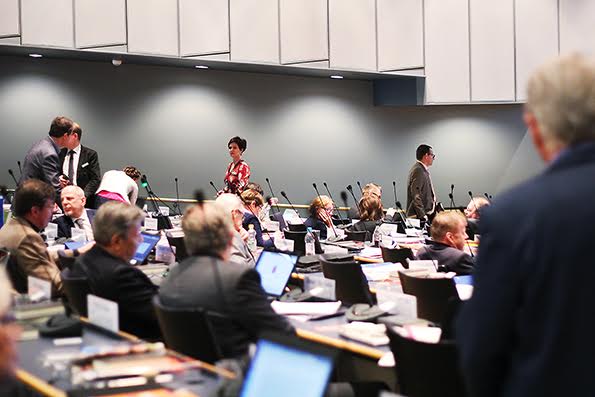 The Synod of the Finnish Lutheran Church was the scenario for an intense debate about same-sex marriage. / Photo: Mari Turunen

While Roman Catholic, Eastern Orthodox and most evangelical churches highlight the marriage between a man and a woman, many mainline Protestant churches have undergone a huge change in their teaching of sexuality.

Finland is the last Nordic country to legalise same-sex marriage. Since 1 March 2017 same-sex couples have been able to get married – but not in the church, although it has been advocated actively.

The Synod of the Evangelical Lutheran Church of Finland gathered 2nd–5th May and had an active discussion about an initiative, which seeks to open marriage for same-sex couples. The initiative provoked altogether 63 speeches.

A strange episode happened on the last day of the four-day long meeting. Synod’s member, Bible teacher and Editor-in-chief of magazine Uusi Tie Leif Nummela was speaking against the initiative. He appealed to the effect on children. According to Nummela, the Church shouldn’t be following society’s development where children are artificially taken away from their biological parents.

This seemed to be too much for the Archbishop of the Finnish Church, Kari Mäkinen. He interrupted Nummela twice and asked him not to talk about the effect on children anymore, “lest it hurt anybody who’s present.” Mäkinen has openly announced his support for gay marriage.

This episode provoked vivid comments on social media. Member of parliament Päivi Räsänen wrote on Facebook: “Nothing like this has ever happened by the Speaker of the Parliament”.

Erkki Koskenniemi, a Synod member, wrote in his blog that the action of archbishop was “unprecedented”: “I’ve been a Synod member for six years and nobody has been treated like Leif Nummela now.”

The initiative was sent to a Synod’s committee, which will prepare a report of it. The Synod will discuss about same-sex marriages again in its next meeting on November.

The Archbishop’s reaction has been interpreted as an example of the hardened attitude in society towards those who represent the traditional view of marriage. “The Liberal trend has determinedly aimed at a situation, where the views it represents are not allowed to be criticised”, writes Timo Eskola, Researcher at Theological Institute of Finland.

This has already been the development in other Nordic Lutheran Churches. In 2015 The Church of Iceland scrapped its freedom of conscience clause, ending the right of clergy to refuse to solemnize same-sex marriages. The resolution overturned a 2007 statement by the annual Church Council, that held that the “freedom of clergy in these matters must be respected”.

In Sweden, pastors have in principle freedom not to minister in a wedding ceremony for gay couples. However, it is difficult to have an office in Church, if you give the answer in a job interview, that you won’t minister to same-sex couples, says Timo Laato, Lecturer at Lutheran School of Theology, Gothenburg, Sweden.

The Church of Norway has officially two views on marriage, and gender is seen as irrelevant to a marriage. A pastor should not question the two views. According to a bishop, there is no room for those in the Church, who call the Church’s new doctrine as schismatic, says Rolf Kjøde, Director of Continuing Education and External Courses at NLA University College in Norway.