The Bulgarian Orthodox Church agreed “to intercede and advocate” for the Macedonian Church in its hopes for canonical independence. 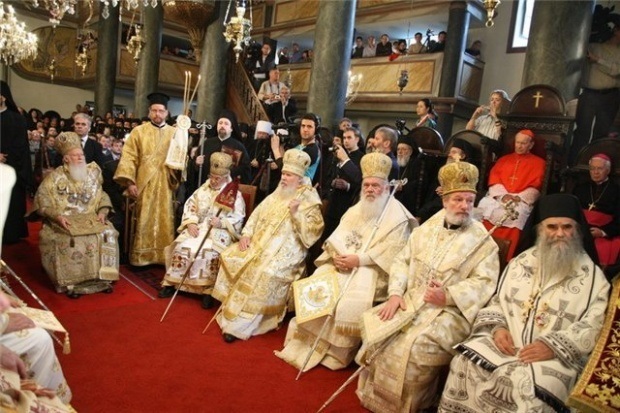 Members of the Holy Synod of the Bulgarian Orthodox Church. / Photo: novinite.bg

On Monday, November 27, the Bulgarian Patriarch and the diocesan prelates met to discuss their reply to an official letter sent last week from Ochrid.

According to Eastern Orthodox cannons, in order for any national church to receive legitimacy, it needs to be “in Eucharistic communion” with the other 14 autocephalic churches.

Quoting the words of the Apostle Paul in 1 Corinthians 12:26, “Whenever one member suffer, all the members suffer with it; or when one member is honored, all the members rejoice with it,” the Bulgarian patriarchate declared that it “has always had compassion for the sufferings of Macedonian Orthodox Church.” The synod appointed a special eight-member committee to start negotiations between the Macedonian Church and the other fourteen local Eastern Orthodox Churches towards the establishment of its canonicity.

The Macedonian Orthodox Church has hoped to receive a recognition for its “autocephaly” (canonical independence) for the past fifty years.

In 2009, the Macedonian Orthodox Church added to its name the phrase “Ochrid Archbishopric” and changed its flag and its coat of arms. In doing this, it also declared itself to be the official heir of the previously existing Archbishopric of Ochrid dating back to the 18th century.

The negotiations will not be easy at all. For one, there is still no apparent clarity as to whether the Ochrid Archbishopric is heading towards “autocephaly” or “autonomy” (as written in their letter of request to the Bulgarian Patriarchate). In addition, the history of the Balkan Peninsula is one of complicated history full of emotion and nostalgia to previous glory days for every nation.

Most probably, the Russian Orthodox Church will also be reluctant to discuss such a development because of its own complicated relations with the Ukrainian sChurch which has lately expressed hopes to receive a recognition, too. It is also uncertain what reactions would be heard from the Greek Orthodox Church because of Greece’s traditional and historical claim for the name “Macedonia”.

Autocephaly is the canonical term used by Eastern Orthodox churches to define the status of any hierarchical Church whose head does not report to any higher-ranking bishop. When a church council releases an ecclesiastical province from the authority of that bishop (while the new church remains in Eucharistic communion with its mother church to which it ceases to belong), the council grants autocephaly. The meaning of the word autocephaly is “self-headed.”

The issue of who can grant autocephaly is still controversial. For instance, in 1970, the Orthodox Church in America was granted autocephaly by the Russian Orthodox Church, but was not recognized by most patriarchates. In some cases, autocephaly is granted by a mother church; in others it was recognized traditionally; some churches were granted independence by a church council; while still others became autocephalous due to a decision of a state. The Church of Bulgaria, for example, was declared independent in 1872 by a decree of the Ottoman Sultan, creating a canonical mess and a Greek imposed schism (eventually lifted in 1945).

There is an important difference between autocephaly and ethnophyletism (lit., “local tribalism”). The term “ethnophyletism” designates the idea that a local church should be based not on an ecclesial criterion, but on a national or linguistic one, thus creating conflation between church and nation. After the Bulgarian Orthodox Church was granted autocephaly by the Sultan, a special synod in Constantinople was summoned in September, 1872, condemning ethnophyletism as a modern ecclesial heresy: the autocephalous Church “should not be confused with the destiny of a single nation or a single race”.

One step short of “autocephaly” is the term “autonomy.” A church that is autonomous has its highest-ranking bishop, such as an archbishop or metropolitan, appointed by the patriarch of the mother church, but is self-governing in all other respects.

The Bulgarian Synod’s decision came only days after a meeting between Bulgarian Patriarch Neofit and Bulgarian President Rumen Radev, in which it was affirmed that Bulgaria is committed to the deepening of relations with Macedonia. In the meantime, Bulgarian and Macedonian regional leaders and mayors met for a round table discussion in the town of Kuystendil, planning collaboration in the sphere of implementing EU sponsored bilateral projects.

In January, 1992, Bulgaria was the first country to recognize the independence of Macedonia. Besides religious topics, the two countries share much history, culture, ethnical traditions, and language. Despite some arguments on issues of history and identity, there has been a tangible political and social rapprochement between the two countries.